In the Roman currency system, the denarius (/dɪˈnɛərɪəs/ di-NAIR-i-əs; plural: denarii /dɪˈnɛərɪaɪ/ di-NAIR-i-eye) was a small silver coin first minted about 211 BC during the Second Punic War. It became the most common coin produced for circulation but was slowly debased in weight and silver content until its replacement by the double denarius, called the antoninianus, early in the 3rd century AD. The word denarius is derived from the Latin dēnī "containing ten", as its value was 10 asses, although in the middle of the 2nd century BC it was recalibrated so that it was now worth sixteen asses or four sestertii. It is the origin of several modern words such as the currency name dinar; it is also the origin for the common noun for money in Italian denaro, in Portuguese dinheiro and in Spanish dinero. Its symbol is 𐆖.

A predecessor of the denarius was first struck in 267 BC, five years before the first Punic War[1] with an average weight of 6.81 grams, or ​1⁄48 of a Roman pound. Contact with the Greeks prompted a need for silver coinage in addition to the bronze currency that the Romans were using during that time. The predecessor of the denarius was a Greek-styled silver coin, very similar to the didrachm and drachma struck in Metapontion[citation needed] and other Greek cities in southern Italy. These coins were inscribed for Rome but closely resemble their Greek counterparts. They were most likely used for trade purposes and were seldom used in Rome.

The first distinctively Roman silver coin appeared around 226 BC.[2] Classic historians sometimes called these coins denarii in the past, but they are classified by modern numismatists as quadrigati, which is derived from the quadriga, or four-horse chariot, on the reverse, and which with a two-horse chariot or biga was the prototype for the most common designs used on Roman silver coins for the next 150 years.[3][4][5]

Rome overhauled its coinage around 211 BC and introduced the denarius alongside a short-lived denomination called the victoriatus. This denarius contained an average 4.5 grams, or ​1⁄72 of a Roman pound of silver. It formed the backbone of Roman currency throughout the Roman republic.[6]

The denarius began to undergo slow debasement toward the end of the republican period. Under the rule of Augustus, (63 BC-AD 14) its silver content fell to 3.9 grams (a theoretical weight of ​1⁄84 of a Roman pound). It remained at nearly this weight until the time of Nero (AD 37-68), when it was reduced to ​1⁄96 of a pound, or 3.4 grams. Debasement of the coin's silver content continued after Nero. Later Roman emperors reduced its content to 3 grams around the late third century.[7]

The value at its introduction was 10 asses, giving the denarius its name, which translates as "containing ten". In about 141 BC, it was re-tariffed at 16 asses, to reflect the decrease in weight of the as. The denarius continued to be the main coin of the Roman Empire until it was replaced by the antoninianus in the middle of the third century. The last issuance of this coin occurred in bronze form by Aurelian, between AD 270 and 275, and in the first years of the reign of Diocletian. For more details, see 'Denarius', in A Dictionary of Ancient Roman Coins, by John R. Melville-Jones (1990).[8][9]

The denarius has a link from the Roman times to the British penny and US 1 cent piece (colloquially called 'penny').

Flavia Domitilla, wife of Vespasian and mother of Titus and Domitian.

It is difficult to give even rough comparative values for money from before the 20th century, as the range of products and services available for purchase was different. Classical historians often say that in the late Roman Republic and early Roman Empire (~27BC) the daily wage for an unskilled laborer and common soldier was 1 denarius (with no tax deductions) or about US$20 in bread.[10] During the republic (509–27 BC),[when?] legionary (professional soldier) pay was 112.5 denarii per year (0.3/day), later doubled by Julius Caesar to 225 denarii (0.6/day), with soldiers having to pay for their own food and arms.[citation needed] Centurions received considerably higher pay; under Augustus, the lowest rank of centurion was paid 3,750 denarii and the highest rank, 15,000 denarii.[citation needed]

In the final years of the first century BC Tincomarus the ruler of part of Britain started issuing coins that appear to have been made from melted down Denarii.[15]

Even after the denarius was no longer regularly issued, it continued to be used as a unit of account, and the name was applied to later Roman coins in a way that is not understood. The Arabs who conquered large parts of the land that once belonged to the Eastern Roman Empire issued their own gold dinar. The lasting legacy of the denarius can be seen in the use of "d" as the abbreviation for the British penny prior to 1971.[16] It survived in France as the name of a coin, the denier. The denarius also survives in the common Arabic name for a currency unit, the dinar used from pre-Islamic times, and still used in several modern Arabic-speaking nations. The major currency unit in former Principality of Serbia, Kingdom of Serbia and former Yugoslavia was dinar, and it is still used in present-day Serbia. The Macedonian currency denar is also derived from the Roman denarius. The Italian word denaro, the Spanish word dinero, the Portuguese word dinheiro, and the Slovene word denar, all meaning money, are also derived from Latin denarius. 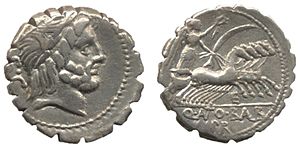 The gold aureus seems to have been a "currency of account," a denomination not commonly seen in daily transactions due to its high value. Numismatists think that the aureus was used to pay bonuses to the legions at the accession of new emperors. It was valued at 25 denarii.[citation needed]

Use in the Bible

In the New Testament, the gospels refer to the denarius as a day's wage for a common laborer (Matthew 20:2,[17] John 12:5).[18] In the Book of Revelation, during the Third Seal: Black Horse, a choinix (or quart) of wheat and three quarts of barley were each valued at one denarius.[19] Bible scholar Robert H. Mounce says the price of the wheat and barley as described in the vision appears to be ten to twelve times their normal cost in ancient times (The New International Commentary on the New Testament, "The Book of Revelation," p. 155). Revelation describes a condition where basic goods are sold at greatly inflated prices. Thus, the black horse rider depicts times of deep scarcity or famine but not of starvation. The English word "quart" translates choinix. Apparently, a choinix of wheat was the daily ration of one adult. Thus, in the conditions pictured by Revelation 6 the normal income for a working-class family would buy enough food for only one person. The less costly barley would feed three people for one day's wages.

The silver denarius is one of the two main units of currency in Rick Riordan's The Heroes of Olympus series, along with the golden drachma.

Physical Bitcoin coin manufacturer Denarium has derived it's name from denarius.[20] Denarium coins are in circulation and they contain Bitcoin digital currency.