Denis Papin (22 August 1647 – c. 1712) was a French physicist, mathematician and inventor, best known for his pioneering invention of the steam digester, the forerunner of the pressure cooker, and of the steam engine.

Born in Chitenay (Loir-et-Cher, Centre Région), Papin attended a Jesuit school there, and from 1661 attended University at Angers, from which he graduated with a medical degree in 1669. In 1673, while working with Christiaan Huygens and Gottfried Leibniz in Paris, he became interested in using a vacuum to generate motive power. 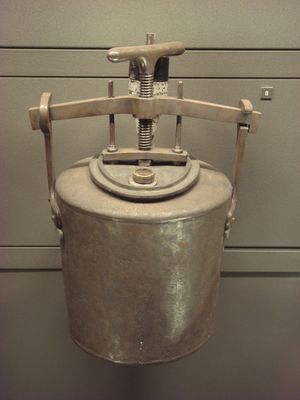 Papin first visited London in 1675, and worked with Robert Boyle from 1676 to 1679, publishing an account of his work in Continuation of New Experiments (1680).[1] During this period, Papin invented the steam digester, a type of pressure cooker with a safety valve. He first addressed the Royal Society in 1679 on the subject of his digester, and remained mostly in London until about 1687, when he left to take up an academic post in Germany.

As a Huguenot, Papin found himself greatly affected by the increasing restrictions placed on Protestants by Louis XIV of France and by the King's ultimate revocation of the Edict of Nantes in 1685. In Germany he was able to live with fellow Huguenot exiles from France.

In 1689, Papin suggested that a force pump or bellows could maintain the pressure and fresh air inside a diving bell. (Engineer John Smeaton utilised this design in 1789.[2][3])

While in Marburg in 1690, having observed the mechanical power of atmospheric pressure on his 'digester', Papin built a model of a piston steam engine, the first of its kind.

Papin continued to work on steam engines for the next fifteen years. In 1695 he moved from Marburg to Kassel. In 1705 he developed a second steam engine with the help of Gottfried Leibniz, based on an invention by Thomas Savery, but this used steam pressure rather than atmospheric pressure. Details of the engine were published in 1707.

During his stay in Kassel in Hesse, in 1704, he constructed a ship powered by his steam engine, mechanically linked to paddles. This made him the first to construct a steam-powered boat (or vehicle of any kind). Later, at the iron foundry in Veckerhagen (now Reinhardshagen), he cast the world's first steam cylinder. 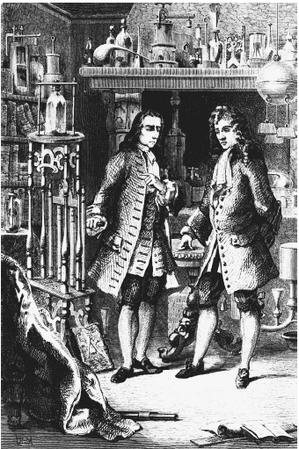 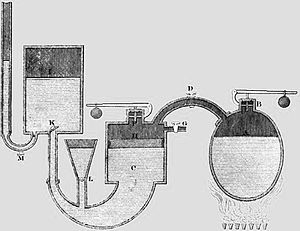 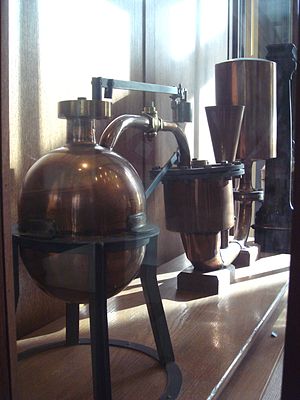 Papin returned to London in 1707, leaving his wife in Germany. Several of his papers were put before the Royal Society between 1707 and 1712 without acknowledging or paying him, about which he complained bitterly. Papin's ideas included a description of his 1690 atmospheric steam engine, similar to that built and put into use by Thomas Newcomen in 1712, thought to be the year of Papin's death.

The last surviving evidence of Papin's whereabouts came in a letter he wrote dated 23 January 1712. At the time he was destitute, and it is believed he died that year and was buried in an unmarked pauper's pit.