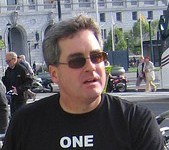 Dennis Herrera is the elected City Attorney of San Francisco, perhaps best known for his longtime legal advocacy for same-sex marriage in California, including the ''in re Marriage'' cases, 43 Cal.4th 757 (2008), and Hollingsworth v. Perry, 570. U.S. (2013), also known as the legal fight against Proposition 8. He was first elected as City Attorney in 2001, and re-elected without opposition in 2005 and 2009.[1] He ran unsuccessfully for Mayor of San Francisco in the 2011 election, finishing third in the City's ranked-choice voting system.

Born November 6, 1962 in Bay Shore, Long Island, New York, Herrera grew up in the nearby middle class community of Glen Cove.[2] His father was a psychiatrist who immigrated from Colombia after serving as part of a UN Peacekeeping force during the Suez War of 1956. His mother is the child of Italian immigrants, and today still practices as a nurse in Glen Cove.

Herrera earned his Bachelor’s degree from Villanova University in Pennsylvania, and his Juris Doctor from the George Washington University School of Law in Washington, D.C. Herrera worked various jobs to support himself during his education, from his newspaper route as a young boy, to restocking shelves at the local grocery store, to serving as a short order cook in a local diner. Upon graduating from law school in 1987, Herrera was offered an associate position at a maritime law firm in San Francisco and moved to the city.[3]

After his move to San Francisco, Herrera became an active member of the community, joining his local Democratic club and helping to get Democratic candidates elected in the city. In 1990, he was appointed to the Waterfront Plan Advisory Board, and later served on the Finance Committee for the California Democratic Party.

In 1993, Herrera served as Chief of Staff for the U.S. Maritime Administration in Washington, D.C. After helping run an office with 1,100 employees, he returned to private practice in San Francisco as a partner in the maritime law firm of Kelly, Gill, Sherburne & Herrera.[4]

Then-Mayor Willie Brown appointed Herrera to the SF Transportation Commission, and later to the San Francisco Police Commission. Herrera was voted the President of the Police Commission after just one year of service.[3]

In December 2001, Herrera was elected San Francisco City Attorney, becoming the first Latino to hold the office. He is currently serving his third term, having been re-elected in 2005 and 2009.

Herrera has long expressed an "activist approach" to serving as City Attorney, expanding the traditional role of a municipal law office to one that includes aggressively litigating consumer and environmental protection cases,[5] civil rights issues, and to address wage theft and tenant protection.[6][7]

On March 24, 2008, Herrera filed a lawsuit against the National Arbitration Forum and two other arbitration providers, alleging that the defendants were not neutral as they claimed in arbitration disputes between credit card companies and their customers, but were instead heavily biased in favor of lenders, calling NAF "little more than a collection agent masquerading as a neutral party."[8] He alleged that NAF's records showed that consumers prevailed in just 0.2% of arbitration cases that went to a hearing.[9]

When the Healthy San Francisco Initiative became law in 2006, establishing universal health care in the City, Herrera successfully defended the law's constitutionality against legal challenge.[10] When some of the fees earmarked for the initiative were misappropriated by San Francisco restaurants, he convinced some of the restaurants to participate in a voluntary settlement program that recovered $844,000 for their employees.[11]

After the Sacramento Bee discovered that mental patients in Nevada were being bused to various California cities without any supervision or plan for what they would do upon arrival, Herrera opened an investigation that found that dozens of these patients had been shipped to San Francisco.[12][13] The case prompted a review from the government of Nevada of its policies concerning the mentally ill.

On April 29, 2013, Monster Beverage Corporation, makers of Monster Energy drinks, filed a civil lawsuit against Herrera, alleging that he was violating their constitutional rights[14] by investigating the company's marketing of its products to children despite a massive increase in hospitalizations and deaths among children due to consumption of energy drinks.[15] Herrera filed suit against Monster the following week, demanding that they cease marketing their products to children.[16]

Herrera has been involved in a number of high-profile cases against the National Rifle Association and other gun rights advocates, both to defend San Francisco's gun safety measures and to challenge gun industry practices.[17] On June 10, 2013, he filed a civil lawsuit against three gun accessory manufacturers, alleging that some magazine "repair kits" sold by the defendants were in fact merely disassembled high-capacity magazines, sales of which are prohibited in California.[18]

Herrera has been involved in every phase of the legal fight for marriage equality for same-sex couples in California.[19]

In 2009, he joined the City of San Francisco as a plaintiff in the case of Perry v. Schwarzenegger, seeking to overturn the state's ban on same-sex marriage, the first time any government entity had sued to challenge marriage laws discriminating against gay and lesbian couples. Los Angeles City Attorney Rocky Delgadillo and Santa Clara County Counsel Ann M. Ravel would also join their jurisdictions as plaintiffs in the suit.

In San Francisco's petition to the California Supreme Court, Herrera said: “The issue before the court today is of far greater consequence than marriage equality alone ... Equal protection of the laws is not merely the cornerstone of the California Constitution, it is what separates constitutional democracy from mob rule tyranny. If allowed to stand, Prop 8 so devastates the principle of equal protection that it endangers the fundamental rights of any potential electoral minority -- even for protected classes based on race, religion, national origin and gender. The proponents of Prop 8 waged a ruthless campaign of falsehood and fear, funded by millions of dollars from out-of-state interest groups. Make no mistake that their success in California has dramatically raised the stakes. What began as a struggle for marriage equality is today a fight for equality itself. I am confident that our high court will again demonstrate its principled independence in recognizing this danger, and in reasserting our constitution's promise of equality under the law.”[20]

In August 2010, Herrera announced that he would run in the San Francisco Mayoral Election of 2011.

Dennis and his wife Anne first met in 1999, and were married 10 months later. They live in the Dogpatch neighborhood of San Francisco with their son Declan, born in 2001. Declan goes to Chinese American International School and his father coaches his baseball and soccer teams.[21]