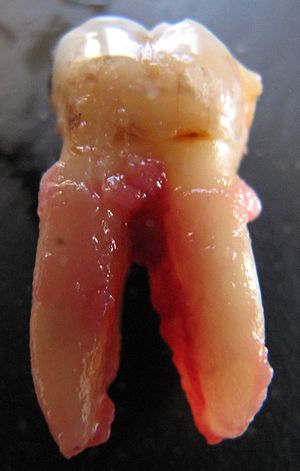 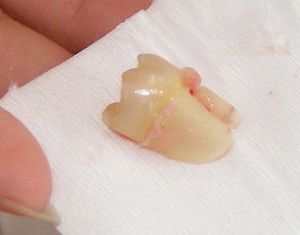 Extracted wisdom tooth that was horizontally impacted
File:Extractedteethcomparion.jpg
two extracted teeth from a 14-year-old male, compared against a £1 coin, which has a diameter of 22.50 millimetres (0.89 inches)

A dental extraction (also referred to as tooth extraction, exodontia, exodontics, or informally, tooth pulling) is the removal of teeth from the dental alveolus (socket) in the alveolar bone. Extractions are performed for a wide variety of reasons, but most commonly to remove teeth which have become unrestorable through tooth decay, periodontal disease or dental trauma, especially when they are associated with toothache. Sometimes wisdom teeth are impacted (stuck and unable to grow normally into the mouth) and may cause recurrent infections of the gum (pericoronitis). In orthodontics if the teeth are crowded, sound teeth may be extracted (often bicuspids) to create space so the rest of the teeth can be straightened.

Tooth extraction is usually relatively straightforward, and the vast majority can be usually performed quickly while the individual is awake by using local anesthetic injections to eliminate painful sensations. Local anesthetic blocks pain, but mechanical forces are still vaguely felt. Some teeth are more difficult to remove for several reasons, especially related to the tooth's position, the shape of the tooth roots and the integrity of the tooth. Dental phobia is an issue for some individuals, and tooth extraction tends to be feared more than other dental treatments like fillings. If a tooth is buried in the bone, a surgical or trans alveolar approach may be required, which involves cutting the gum away and removal of the bone which is holding the tooth in with a surgical drill. After the tooth is removed, stitches are used to replace the gum into the normal position.

Immediately after the tooth is removed, a bite pack is used to apply pressure to the tooth socket and stop the bleeding. After a tooth extraction, dentists usually give advice which revolves around not disturbing the blood clot in the socket by not touching the area with a finger or the tongue, by avoiding vigorous rinsing of the mouth and avoiding strenuous activity. Sucking, such as through a straw, is to be avoided. If the blood clot is dislodged, bleeding can restart, or alveolar osteitis ("dry socket") can develop, which can be very painful and lead to delayed healing of the socket. Smoking is avoided for at least 24 hours as it impairs wound healing and makes dry socket significantly more likely. Most advise hot salt water mouth baths which start 24 hours after the extraction.

The branch of dentistry that deals primarily with extractions is oral surgery ("exodontistry"), although general dentists and clinicians from other dental specialties may also carry out tooth extraction routinely since it is a core skill taught in dental schools.

The most common reason for extraction is tooth damage due to breakage or decay. There are additional reasons for tooth extraction:

Extractions are often categorized as "simple" or "surgical".

Simple extractions are performed on teeth that are visible in the mouth, usually under local anaesthetic, and require only the use of instruments to elevate and/or grasp the visible portion of the tooth. Typically the tooth is lifted using an elevator, and using dental forceps, rocked back and forth until the periodontal ligament has been sufficiently broken and the supporting alveolar bone has been adequately widened to make the tooth loose enough to remove. Typically, when teeth are removed with forceps, slow, steady pressure is applied with controlled force.

Patients utilizing long-term anticoagulant therapies such as warfarin or salicylic acid do not need to discontinue its use prior to having a tooth extracted. The extraction should be performed utilizing the least traumatic extraction procedures.[11] As such, patients should make sure to tell their dentist or oral surgeon about any medications they may take before the procedure.

Antibiotics can be prescribed by dental professionals to reduce risks of certain post extraction complications. There is evidence that use of antibiotics before and/or after impacted wisdom tooth extraction reduces the risk of infections by 70% and lowers incidence of dry socket by one third. For every 12 people who are treated with an antibiotic following impacted wisdom tooth removal, one infection is prevented. Use of antibiotics does not seem to have a direct effect on manifestation of fever, swelling or trismus seven days post-extraction. In the 2013 Cochrane review, 18 randomized control double-blinded experiments were reviewed and after considering the biased risk associated with these studies, it was concluded that there is moderate overall evidence supporting the routine use of antibiotics in practice in order to reduce risk of infection following a third molar extraction. There are still reasonable concerns remaining regarding the possible adverse effects of indiscriminate antibiotic use in patients. There are also concerns about development of antibiotic resistance which advises against the use of prophylactic antibiotics in practice.[12] Prior to taking any medication make sure to consult your dentist or health care professional. 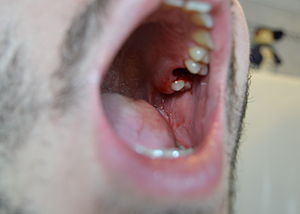 Immediately following the removal of a tooth, bleeding or just oozing very commonly occurs. Pressure is applied by biting on a gauze swab, and a thrombus (blood clot) forms in the socket (hemostatic response). Sometimes 30 minutes of continuous pressure is required to fully arrest bleeding. Talking, which moves the mandible and hence removes the pressure applied on the socket, instead of keeping constant pressure, is a very common reason that bleeding might not stop. This is likened to someone with a bleeding wound on their arm, when being instructed to apply pressure, instead holds the wound intermittently every few moments. Coagulopathies (clotting disorders, e.g. hemophilia) are sometimes discovered for the first time if a person has had no other surgical procedure in their life, but this is rare. Sometimes the blood clot can be dislodged, triggering more bleeding and formation of a new blood clot, or leading to a dry socket (see complications). Some oral surgeons routinely scrape the walls of a socket to encourage bleeding in the belief that this will reduce the chance of dry socket, but there is no evidence that this practice works.

The chance of further bleeding reduces as healing progresses, and is unlikely after 24 hours. The blood clot is covered by epithelial cells which proliferate from the gingival mucosa of socket margins, taking about 10 days to fully cover the defect.[13] In the clot, neutrophils and macrophages are involved as an inflammatory response takes place. The proliferative and synthesizing phase next occurs, characterized by proliferation of osteogenic cells from the adjacent bone marrow in the alveolar bone. Bone formation starts after about 10 days from when the tooth was extracted. After 10–12 weeks, the outline of the socket is no longer apparent on an X-ray image. Bony remodeling as the alveolus adapts to the edentulous state occurs in the longer term as the alveolar process slowly resorbs. In maxillary posterior teeth, the degree of pneumatization of the maxillary sinus may also increase as the antral floor remodels.

There are specific factors that need to be accounted for when considering nerve injury post removal of mandibular third molars (bottom wisdom teeth). Position of the molars in an important risk factor with regards to inferior alveolar nerve injuries. Horizontally impacted molars pose a higher risk of nerve injury, is increased as the depth of the impacted molar is increased. Furthermore, the most important factor for inferior alveolar nerve injury prediction is the proximity of the root tips to the mandibular canal.[18]

Many drug therapies are available for pain management after third molar extractions including NSAIDS (non-steroidal anti-inflammatory), APAP (acetaminophen) and opioid formulations. Although each has its own pain relieving efficacy, they also pose adverse effects. According to Dr. Paul A Moore and Dr. Elliot V. Hersh, Ibuprofen-APAP combinations have the greatest efficacy in pain relief and reducing inflammation along with the fewest adverse effects. Taking either of these agents alone or in combination may be contraindicated in those who have certain medical conditions. For example, taking ibuprofen or any NSAID in conjunction with warfarin (a blood thinner) may not be appropriate. Also, prolonged use of ibuprofen or APAP has GI and cardiovascular risks.[19]

Socket preservation or alveolar ridge preservation (ARP)[20] is a procedure to reduce bone loss after tooth extraction to preserve the dental alveolus (tooth socket) in the alveolar bone. At the time of extraction a platelet rich fibrin (PRF)[21] membrane containing bone growth enhancing elements is placed in the wound or a graft material or scaffold is placed in the socket of the extracted tooth.[22][23] The socket is then directly closed with stitches or covered with a non-resorbable or resorbable membrane and sutured.[24]

Following dental extraction, a gap is left. The options to fill this gap are commonly recorded as "BIND", and the exact choice is agreed between dentist and patient based upon several factors.

Historically, dental extractions have been used to treat a variety of illnesses. Before the discovery of antibiotics, chronic tooth infections were often linked to a variety of health problems, and therefore removal of a diseased tooth was a common treatment for various medical conditions. Instruments used for dental extractions date back several centuries. In the 14th century, Guy de Chauliac invented the dental pelican,[25] which was used through the late 18th century. The pelican was replaced by the dental key which, in turn, was replaced by modern forceps in the 20th century. As dental extractions can vary tremendously in difficulty, depending on the patient and the tooth, a wide variety of instruments exist to address specific situations. Rarely, tooth extraction was used as a method of torture, e.g. to obtain forced confessions.[26]