The Department of Defense Education Activity (DoDEA) is a civilian agency of the United States Department of Defense that manages all schools for military children and teenagers in the United States and also overseas at American military bases worldwide.[1] DoDEA also provides support to more than one million military-connected students who attend public schools throughout the United States. It is headed by a director who oversees all agency functions from the Mark Center in Alexandria, Virginia.[2] DoDEA's schools are divided into three areas, each of which is managed by an area director. Within each of these three areas, schools are organized into districts headed by superintendents. 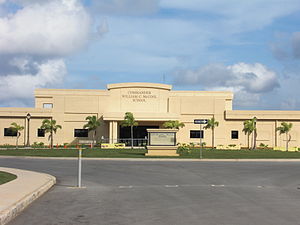 DoDEA's schools serve the children of military service members and Department of Defense civilian employees throughout the world. Children of enlisted military personnel represent 85 percent of the total enrollment in DoDEA schools.

The DoDEA instructional program provides a comprehensive prekindergarten through 12th grade curriculum that is competitive with that of any school system in the United States. DoDEA maintains a high school graduation rate of approximately 97 percent. The 3,102 graduating seniors in DoDEA's Class of 2002 earned more than $35 million in scholarships and grants.

DoDEA monitors student progress through the use of standardized tests. Students take the TerraNova achievement tests, a series of norm-referenced tests for students in grades 3 through 11. Every year, at every grade level tested, and in every subject area, DoDEA students score above the national average.[citation needed] DoDEA 4th and 8th grade students also take the National Assessment of Educational Progress (NAEP), also known as "the Nation's Report Card." DoDDS and DDESS student scores consistently rank at or near the top of the scale when compared with the scores of other participating states and jurisdictions.[citation needed] Furthermore, the performance of African American and Hispanic students is among the highest in the nation. Though achievement gaps persist between white and minority students, the academic performance gap is far narrower for DoDEA students than for students throughout the United States.[3]

Shortly after the end of World War II, the United States military established schools for the children of its servicemen stationed in Europe and East Asia (at that time, servicewomen were not allowed to be mothers and remain on active duty).

Schools for children of military members stationed in the United States were established in the South after President Truman's 1949 order desegregating the United State military services.[citation needed] The need for integrated schools can be seen in the pattern of today's Department of Defense Domestic Dependent Elementary and Secondary Schools (DDESS).[citation needed]

First administered by the military branches they served, the growing number of schools was soon transferred to civilian managers. Federal schools in the United States meant to serve the children of military and federal personnel were known as "Section 6 schools," and defined in federal directives as, "When a DoD-operated school is established on Federal property to provide a free public education for eligible children or, if not established on such property, the eligible child resides on such property."

In June 2011, an investigation by the Office of the Inspector General, U.S. Department of Defense substantiated allegations of abuse of power by DoDEA's former director, Shirley Miles. The abuses included violations of federal law and DoD policies in hiring and personnel practices and travel entitlements. Miles was removed as director in June 2010 and replaced by Marilee Fitzgerald.[4][5]

DoDEA is divided into three Area Service Centers — DDESS/DoDDS-Cuba, DoDDS Europe, DoDDS-Pacific/DDESS-Guam. While the three Service Centers are still officially named as mentioned previously, a new concept, known as "Team DoDEA" has been introduced with the three "areas" more frequently being referred to as DoDEA America, DoDEA Pacific, and DoDEA Europe. This concept is hoped to create a more stream-lined approach in administration and implementation of new programs.

Operates all DoDEA schools on the U.S. mainland, Puerto Rico, and the Guantanamo Bay Naval Base in Cuba. 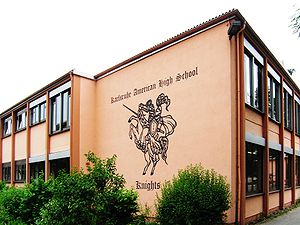 Operates schools in Europe and the Mediterranean.