Department of Engineering, University of Cambridge

In 1782, the Reverend Richard Jackson of Torrington, former fellow of Trinity College, died leaving a substantial portion of his estate to endow a Professorship of Natural Experimental Philosophy. This became forerunner to the Professorship of Mechanism and Applied Mechanics, first held in 1875 by James Stuart. [2]

The first engineering workshop at Cambridge was constructed in 1878, a wooden hut fifty by twenty feet. The department now boasts several sites around Cambridge: 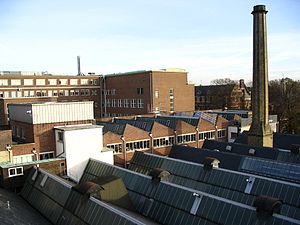 Notable companies and projects founded by students and alumni

There are about 1,200 undergraduate students in the Department at any time, with about 320 students admitted each year.

The first two years are essentially the same for all students and aim to give a broad overview, covering mechanical and structural engineering, as well as materials, electrical and information engineering. From the third year, students students are required to specialise, undertaking either the Engineering Tripos or Manufacturing Engineering Tripos.

In the Engineering Tripos, students specialise in one of nine engineering disciplines:

Meanwhile, the Manufacturing Engineering Tripos provides an integrated course in industrial engineering, including both operations and management.[8]

The Department of Engineering currently has about 190 faculty and PI-status researchers, 300 postdoctoral researchers, and 850 graduate students. Post-graduate education in the consists of both taught courses and research degrees (PhD, MPhil and MRes). The majority of research students study for a PhD degree while around 10 per cent follow the one-year MPhil (research) programme.

The Department also has a number of Engineering and Physical Sciences Research Council (EPSRC) Centres for Doctoral Training (CDTs), which follow a 1-plus-3 year model where a one-year MRes course is followed by a three-year PhD. Full funding for four years is provided through these centres. In addition to the CDTs, the Department has a limited number of EPSRC PhD studentships available for British and EU students.[9]