From Infogalactic: the planetary knowledge core
Jump to: navigation, search
For the online sibling of Der Spiegel, see Spiegel Online.

Der Spiegel (German pronunciation: [deːɐ ˈʃpiːɡəl], lit. "The Mirror") is a German weekly news magazine published in Hamburg. It is one of Europe's largest publications of its kind, with a weekly circulation of 840,000.[1][2][3]

It was founded in 1947[4] by de (John Seymour Chaloner), a British army officer, and Rudolf Augstein, a former Wehrmacht radio operator who was recognized in 2000 by the International Press Institute as one of the fifty World Press Freedom Heroes.[5] Spiegel Online, the online sibling of Der Spiegel, was launched in 1994 with an independent editorial staff. Typically, the magazine has a content to advertising ratio of 2:1.

Der Spiegel is known in German-speaking countries mostly for its investigative journalism. It has played a key role in uncovering many political scandals such as the Spiegel scandal in 1962 and the Flick affair in the 1980s. According to The Economist, Der Spiegel is one of continental Europe's most influential magazines.[6] 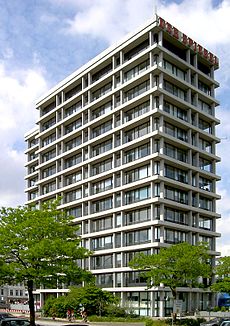 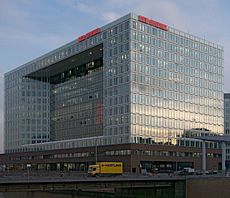 The first edition of Der Spiegel was published in Hanover on Saturday, 4 January 1947.[7] Its release was initiated and sponsored by the British occupational administration and preceded by a magazine titled, Diese Woche (meaning This Week in English),[7] which had first been published in November 1946. After disagreements with the British, the magazine was handed over to Rudolf Augstein as chief editor, and was renamed Der Spiegel. From the first edition in January 1947, Augstein held the position of editor-in-chief, which he retained until his death on 7 November 2002.

After 1950, the magazine was owned by Rudolf Augstein and John Jahr; Jahr's share merged with Richard Gruner in 1965 to form the publishing company Gruner + Jahr. In 1969, Augstein bought out Gruner + Jahr for DM 42 million and became the sole owner of Der Spiegel. In 1971, Gruner + Jahr bought back a 25% share in the magazine. In 1974, Augstein restructured the company to make the employees shareholders. All employees with more than three years seniority were offered the opportunity to become an associate and participate in the management of the company, as well as in the profits.

Since 1952, Der Spiegel has been headquartered in its own building in the old town part of Hamburg.

The magazine's influence is based on two pillars; firstly the moral authority established by investigative journalism since the early years and proven alive by several impressive scoops during the 1980s; secondly the economic power of the prolific Spiegel publishing house. Since 1988, it has produced the TV programme Spiegel TV, and further diversified during the 1990s.

In 2010 Der Spiegel was employing the equivalent of 80 full-time fact checkers, which the Columbia Journalism Review called "most likely the world's largest fact checking operation".[15] The same year it was the third best-selling general interest magazine in Europe with a circulation of 1,016,373 copies.[16]

When Stefan Aust took over in 1994, the magazine's readers realised that his personality was different from his predecessor. In 2005, a documentary by Stephan Lamby quoted him as follows: "We stand at a very big cannon!"[17] Politicians of all stripes who had to deal with the magazine's attention often voiced their disaffection for it. The outspoken conservative Franz Josef Strauß contended that Der Spiegel was "the Gestapo of our time". He referred to journalists in general as "rats".[18] The Social Democrat Willy Brandt called it "Scheißblatt" (i.e., a "shit paper") during his term in office as Chancellor.

Der Spiegel often produces feature-length articles on problems affecting Germany (like demographic trends, the federal system's gridlock or the issues of its education system) and describes optional strategies and their risks in depth.[19][20][21][22][23] The magazine plays the role of the opinion leader in the German press.[24]

Der Spiegel has a distinctive reputation for revealing political misconduct and scandals. Online Encyclopædia Britannica emphasizes this quality of the magazine as follows: "The magazine is renowned for its aggressive, vigorous, and well-written exposes of government malpractice and scandals."[10] It merited recognition for this as early as 1950, when the federal parliament launched an inquiry into Spiegel's accusations that bribed members of parliament had promoted Bonn over Frankfurt as the seat of West Germany's government.

During the Spiegel scandal in 1962, which followed the release of a report about the possibly low state of readiness of the German armed forces, minister of defence and conservative figurehead Franz Josef Strauß had Der Spiegel investigated. In the course of this investigation, the editorial offices were raided by police while Rudolf Augstein and other Der Spiegel editors were arrested on charges of treason. Despite a lack of sufficient authority, Strauß even went after the article's author, Conrad Ahlers, who was consequently arrested in Spain where he was on holiday. When the legal case collapsed, the scandal led to a major shake-up in chancellor Konrad Adenauer's cabinet and Strauß had to stand down. The affair was generally received as an attack on the freedom of the press. Since then, Der Spiegel has repeatedly played a significant role in revealing political grievances and misdeeds, including the Flick Affair.[8]

The Spiegel scandal is now remembered for altering the political culture of post-war Germany and—with the first mass demonstrations and public protests—being a turning point from the old Obrigkeitsstaat (authoritarian state) to a modern democracy.

In 2010, the magazine supported WikiLeaks in publishing leaked materials from the United States State Department, along with The Guardian, The New York Times, El País, and Le Monde[25] and in October 2013 with the help of former NSA contractor Edward Snowden unveiled the systematic wiretapping of Chancellor of Germany Angela Merkel's private cell phone over a period of over 10 years at the hands of the National Security Agency's Special Collection Service (SCS).[26]

The leading role of the magazine in investigative journalism and its monopoly came to end in 2013 since other German media outlets, including Süddeutsche Zeitung, Bild, ARD and ZDF, began to effectively deal with political scandals.[27]

One of the main points of criticism that has been brought against Der Spiegel concerns the use of language in the magazine. In 1957, writer Hans Magnus Enzensberger published his essay Die Sprache des Spiegels (“The Language of Der Spiegel”), in which he criticised what he called a "pretended objectivity". Wolf Schneider, an eminent journalist and stylist has called Der Spiegel "the biggest mangler of the German language" and used quotations from the magazine as examples of inept German in his style guides. Their criticism was not so much one of linguistic aesthetics as an argument that Der Spiegel "hides and distorts its actual topics and issues by manipulative semantics and rhetoric rather than by reporting and analysing them". In 1957, however, Enzensberger admitted in a written statement that no other contemporary German magazine attained the Spiegel's level of objectivity.

Opinions about the level of language employed by Der Spiegel changed in the late 1990s. After hiring many of Germany's best feature writers, Der Spiegel has become known for its "Edelfedern" ("noble quills"—wordsmiths). The magazine frequently wins the Egon Erwin Kisch Prize for the best German feature. Der Spiegel ended up joining the ranks of the guardians of proper grammar and jargon with the Zwiebelfisch ("(printer's) pie") column on the magazine's website, which has even produced several best-selling books.

Some critics, in particular the media historian Lutz Hachmeister and the Augstein biographer and former Der Spiegel author Otto Köhler, have brought charges against the magazine's dealings with former Nazis, even SS officers. Allegedly, Der Spiegel, which at other times showed no restraint when exposing the Nazi past of public figures, distorted history and covered up for criminals after enlisting insiders hired to write about Third Reich topics.[citation needed] Its early reports and serials about the Reichstag fire, written by former SS officers Paul Carell (who had also served as chief press spokesman for Nazi Germany's Foreign Minister Joachim von Ribbentrop) and Fritz Tobias, have since been considered influential in historiography because since the 1960s the Spiegel reports written by these two authors have been corroborated by authoritative historian Hans Mommsen.

A special 25 March edition of Der Spiegel on Islam was banned in Egypt in April 2008 for publishing material deemed by authorities to be insulting Islam and Prophet Muhammed.[29][30]

Der Spiegel began moving into its current head office, HafenCity, in September 2011. The facility was designed by Henning Larsen Architects of Denmark. The magazine was previously located in a high-rise building with 8,226 square metres (88,540 sq ft) of office space.[31]