Derby Museum and Art Gallery was established in 1879, along with Derby Central Library, in a new building designed by Richard Knill Freeman and given to Derby by Michael Thomas Bass. The collection includes a gallery displaying many paintings by Joseph Wright of Derby; there is also a large display of Royal Crown Derby and other porcelain from Derby and the surrounding area. Further displays include archaeology, natural history, geology and military collections. The Art Gallery was opened in 1882.

The museum uses QRpedia to allow visitors to read Wikipedia articles about objects in the collection, translated into their preferred language.

The museum can trace its start to the formation of the Derby Town and County Museum and Natural History Society on 10 February 1836.[1] The society was housed by Full Street Public Baths but it was a private society funded by its members' subscriptions. Its collections were created by donations initially from Dr Forrester who had been a President of Derby Philosophical Society. The patron of the Museum Society was William Cavendish, 6th Duke of Devonshire, and the President was Sir George Crewe who was a keen naturalist.[1] Col. George Gawler contributed a collection of minerals and exotic stuffed birds which included an albatross from his time as governor in South Australia.[2] In 1839 a major exhibition was held at the Mechanics' Institute which contained many items including those from Joseph Strutt's collection. Many of these made their way into Derby Museum's collection.[3] The society moved in 1840 to the Athenaeum in Victoria Street. The society's collections grew in 1856 and they were first offered for incorporation into the town by William Mundy, but the offer was rejected.[1]

In 1857, Llewellyn Jewitt became secretary and the museum was opened to the general public on Saturday mornings. In 1858 the Derby Philosophical Society moved to a house on the Wardwick in Derby as it merged with what was called the Derby Town and County Museum and the Natural History Society.[1] This move included the society's library of 4,000 volumes, mathematical and scientific apparatus and its collection of fossils.[1] In 1863 the botanist Alexander Croall was appointed the first Librarian and Curator and the following year the museum and library were joined together. Croall left in 1875[1] to become the curator of the Smith Institute in Stirling.[4]

The Derby Town and County Museum was finally transferred into the ownership of Derby Corporation in 1870, but there were difficulties in finding space to display the collections. After placing all the artefacts into storage for three years, the museum was finally opened to the public on 28 June 1879.[1] The Art Gallery opened in 1882 and in 1883 the museum had electricity supplied for new lighting. Today the museum is managed by Derby Museums, a registered charitable trust that manages three sites: the City Museum and Art Gallery, Pickford’s House and The Silk Mill, and all art and collections are held and curated by the Trust.

In 1936 the museum was given a substantial collection of paintings by Alfred E. Goodey who had been collecting art for 50 years. At his death in 1945 he left £13,000 to build an extension to the museum. The extension, which now houses the museum, was completed in 1964.[3] Refurbishment to parts of both the new and old buildings were undertaken in 2010–11.[5]

Derby and the Enlightenment connection

Derby was significant in the eighteenth century for its role in the Enlightenment, a period in which science and philosophy challenged the divine right of kings to rule. The enlightenment has many strands, including the largely philosophical "Scottish enlightenment" centred around the philosopher David Hume, and political changes that culminated in the French revolution, but the English Midlands was an area where many key figures of industry and science came together. The Lunar Society included Erasmus Darwin, Matthew Boulton, Joseph Priestley and Josiah Wedgwood with Benjamin Franklin corresponding from America.[6] Erasmus Darwin, grandfather of Charles Darwin, started the Derby Philosophical Society when he moved to Derby in 1783. It was this society which helped to found the first library in Derby.

Some of the paintings by Joseph Wright of Derby, which are renowned for their use of light and shade, are of Lunar Society members. The Derby Gallery possesses over 300 sketches and 34 oil paintings by Wright, and also holds a document collection. One of the paintings is entitled The Alchymist in Search of the Philosopher's Stone (1771) and it depicts the discovery of the element phosphorus by German alchemist Hennig Brand in 1669. A flask in which a large quantity of urine has been boiled down is seen bursting into light as the phosphorus, which is abundant in urine, ignites spontaneously in air. 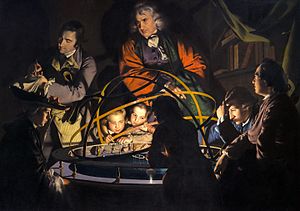 A Philosopher Lecturing on the Orrery, by Joseph Wright, 1766

A Philosopher Lecturing on the Orrery shows an early mechanism for demonstrating the movement of the planets around the sun, and an actual orrery is on display in the centre of the gallery in front of the painting. The Scottish scientist, astronomer and lecturer James Ferguson undertook a series of lectures in Derby in July 1762.[7] They were based on his book Lectures on Select Subjects in Mechanics, Hydrostatics, Pneumatics, Optics &c., published in 1760. In order to illustrate his lectures he used various machines, models and instruments. Wright possibly attended Ferguson’s lecture, especially as tickets for the event were available from John Whitehurst, his close neighbour, the clockmaker and scientist. The artist could also have drawn on Whitehurst's practical knowledge to find out more about the orrery and its operation. 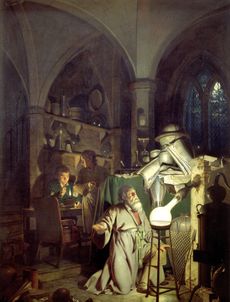 The Alchemist in Search of the Philosopher's Stone, by Joseph Wright, 1771

These factual paintings are considered to have metaphorical meaning too, the bursting into light of the phosphorus in front of a praying figure signifying the problematic transition from faith to scientific understanding and enlightenment, and the various expressions on the figures around the bird in the airpump indicating concern over the possible inhumanity of the coming age of science.[7] These paintings represent a high point in scientific enquiry which began the undermining of the power of religion in Western societies. Some ten years later scientists worldwide would find themselves persecuted, or even put to death in the backlash to the French Revolution of 1789, itself the culmination of enlightenment thinking. Joseph Priestley, member of the Lunar Society and discoverer of oxygen would flee Britain after his laboratory in Birmingham was smashed and his house burned down in the Birmingham riots of 1791, by a mob objecting to his outspoken support for the French Revolution;[8] and his colleague Lavoisier in France would be executed at the guillotine. The politician and philosopher Edmund Burke, in his famous Reflections on the Revolution in France (1790), tied natural philosophers, and specifically Priestley, to the French Revolution, writing that radicals who supported science in Britain "considered man in their experiments no more than they do mice in an air pump". In the light of this comment, Wright's painting of the bird in the air pump, completed over twenty years earlier, seems particularly prescient.

Because of this web of connections related to science, and the tensions it created which were so subtly illustrated by the art of the painter Joseph Wright of Derby, Derby Museum and Art Gallery, far from being just a collection of fine paintings as the casual visitor might imagine, is significant for being in a place that some would see as having a very significant role in the birth of modern science and industry worldwide. Birmingham, with its science and industry, has been described as the 'silicon valley' of the eighteenth century.[9]

Erasmus Darwin has only a small display. Herbert Spencer, friend of Charles Darwin and originator of the phase "the survival of the fittest", who was born in Derby and has been described as the founder of sociology,[10] does not appear to be mentioned at all. 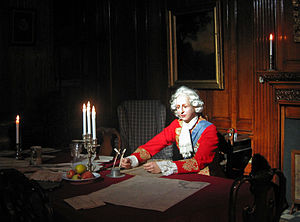 A replica of the room in Derby where Bonnie Prince Charlie held his council of war in 1745, while on his way south to seize the British crown. The paneling is from the original Exeter House, which was demolished in 1854. At the time of demolition, the panels were bought to the museum, which then received related objects as donations. Queen Victoria provided an original letter of Bonnie Prince Charlie from her own collection.[14]

The soldiers story[15] is dedicated to the history of the 9th/12th Royal Lancers, The Sherwood Foresters and the Derbyshire Yeomanry.[16]

The museum has a large collection of items from the Bretby Art Pottery.[17]

The museum uses QRpedia to allow visitors to read Wikipedia articles about objects in their collection, translated into their preferred language. The translations were created by Wikipedians throughout the world in the Spring and Summer of 2011. In some cases the articles are shorter but in other cases the best article may be available in Finnish or Indonesian. The system allows visitors to use their smartphones to read about all the main artefacts in languages including French, Spanish, Portuguese, Japanese, Russian, Belarusian, Indonesian, Czech, Esperanto, Finnish and Catalan as well as some support for languages such as more unusual offerings such as Anglo Saxon, Latin and Cossack. This list is not exhaustive. The Derby Museum-specific artefacts are described in over sixty languages; objects such as minerals – for example, the local matlockite, of which the museum has a sizeable piece[18] – that appear in many museums would be supported in over 100 languages.