Derbyshire Constabulary is the territorial police force responsible for policing the county of Derbyshire, England. The force covers an area of over 1,000 square miles (3,000 km2) with a population of just under one million.[4]

To police the county the force is divided into three territorial divisions, based respectively in the towns of Buxton ('B' Division - covering High Peak and Derbyshire Dales District Council areas), Chesterfield ('C' Division - Chesterfield, NE Derbyshire, Amber Valley and Bolsover and the villages of South Normanton and Pinxton which lie within the boundaries of Bolsover District Council), and Derby ('D' Division - policing the city of Derby and the districts of Erewash, Long Eaton and South Derbyshire). The Force Headquarters, near Ripley and close to the A38 road, is Butterley Hall, former residence of Benjamin Outram and once owned by the Butterley Company. The Old Hall and later additional buildings in the large grounds house much of the force's central administrative services. The old "A" Divisions HQ at Wyatts Way Ripley (adjacent to force Headquarters) is now the home of Operational Support Division which encompasses the Road Policing Unit (with bases at Cotton Lane in Derby, Beetwell Street in Chesterfield and Chapel-en-le-Frith), Air Support (North Midlands Helicopter Support Unit (NMHSU)), a partnership with Nottinghamshire Police), ARU (Armed Response Unit), Dog Section, Uniform Task Force and Road Policing Support (Collision Investigators). 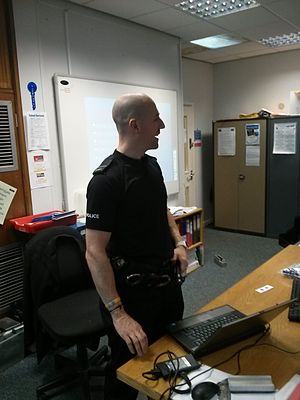 The Constabulary is led by the Chief Constable assisted by a Deputy and two Assistant Chief Constables. Each division is headed by a Chief Superintendent - the Divisional Commander - and each division is divided into Sections, which are led by an Inspector. The force has an authorised establishment of 1,827 police officers,[5] 350 special constables and 104 Police Community Support Officers (PCSOs)[6] The Chief Officers of the force work in partnership with the 17 publicly elected representatives on the Derbyshire Police Authority, which shares responsibility for budgets and policy, and is intended to ensure that the public of Derbyshire have a voice in the policing of their county. Since the introduction of the Police Reform and Social Responsibility Act 2011 the Police and Crime Commissioner is now responsible for tasks that were once completed by the Police Authority. In November 2012 Alan Charles was elected the Police and Crime Commissioner for Derbyshire he will serve a 4-year term. Alan previously served as Vice Chair of the Derbyshire Police Authority. 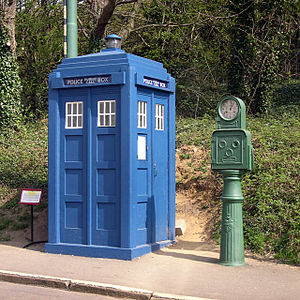 Derbyshire Constabulary polices an area which ranges from remote rural locations to busy city-centre and suburban environments. The more urbanised east and south of the county, including the market town of Chesterfield and the city of Derby, generally require more officers to respond to the needs of the large resident population, while the more rural north and west require the smaller number of officers to be more mobile. Calls for service in the rural areas usually increase during summer as the population is boosted by approximately twenty million visitors each year to the Peak District and its surrounds. Winter weather on the unforgiving high ground around Glossop and Kinder Scout can also cause problems for traffic and residents.

Crime and other demands

Derbyshire's different environments also lead to different pressures on the police and different concerns for the public. Anti-social behaviour and drug abuse are more prevalent in town and city areas, whereas the rural districts are often prone more to travelling crime. In general, Derbyshire has a lower crime rate in comparison to its neighbouring force areas of Greater Manchester Police, South Yorkshire Police, Nottinghamshire Police.[citation needed] These neighbouring areas all contain larger urban centres than Derbyshire and as a result criminals from these areas often travel to Derbyshire to commit crime. A recent Home Office report indicated that Derbyshire had the lowest crime levels in the East Midlands region, and the force states that crime rates have fallen in Derbyshire by 15% in the last year.[citation needed]

Proposals were made by the Home Secretary on 20 March 2006 to integrate groups of police forces in England and Wales into 'strategic' forces, which he saw as being more 'fit for purpose' in terms of combating terrorism and organised crime. Under these proposals Derbyshire would have merged with nearby forces to create an 'East Midlands Police'.[7] However, these proposals were unpopular with much of the community and the police, and for the moment have been deferred, leaving the East Midlands forces to continue independently. In 2010 following the coalition government's drive to reduce spending regional collaboration has been brought back to the table for serious and in depth discussion on how to provide the same or more for less. This may well be the forerunner of a regional force.[citation needed]

Since 1828 the following officers of Derbyshire Constabulary were killed while attempting to prevent or stop a crime in progress:[8]

This audio file was created from a revision of the "Derbyshire Constabulary" article dated 2006-11-02, and does not reflect subsequent edits to the article. (Audio help)
More spoken articles