From Infogalactic: the planetary knowledge core
Jump to: navigation, search
For the lakes in Ireland, see Lough Derg. For the village in Iran, see Derg, Iran. For the city in India, see Durg.

The Derg, Common Derg or Dergue (Ge'ez: ደርግ, meaning "committee" or "council") is the short name of the Coordinating Committee of the Armed Forces, Police, and Territorial Army that ruled Ethiopia from 1974 to 1987. It took power following the ousting of Emperor Haile Selassie I. Soon after it was established, the committee was formally renamed the Provisional Military Administrative Council, but continued to be known popularly as "the Derg". In 1975, it embraced communism as an ideology; it remained in power until 1987.[4] Between 1975 and 1987, the Derg executed and imprisoned tens of thousands of its opponents without trial.[5]

In 1987 Mengistu Haile Mariam abolished the Derg, establishing the People's Democratic Republic of Ethiopia. After years of warfare by a coalition of ethnic-based parties, Mengistu was overthrown in 1991.

The Coordinating Committee of the Armed Forces, Police, and Territorial Army, or the Derg (Ge'ez "Committee"), was officially announced 28 June 1974 by a group of military officers to maintain law and order due to the powerlessness of the civilian government following widespread mutiny in the armed forces of Ethiopia earlier that year. Its members were not directly involved in those mutinies (as far as anyone knows), nor was this the first military committee organized to support the administration of Prime Minister Endelkachew Makonnen. Alem Zewde Tessema had established the Armed Forces Coordinated Committee 23 March. Over the following months, radicals in the Ethiopian military came to believe Makonnen was acting on behalf of the hated feudal aristocracy. When a group of notables petitioned for the release of a number of government ministers and officials who were under arrest for corruption and other crimes, three days later the Derg was announced.[6]

The Derg, which originally consisted of soldiers at the capital, broadened its membership by including representatives from the 40 units of the Ethiopian Army, Air Force, Navy, Kebur Zabagna (Imperial Guard), Territorial Army and Police: each unit was expected to send three representatives, who were supposed to be privates, NCOs and junior officers up to the rank of major. According to Bahru Zewde, "Senior officers were deemed too compromised by close association to the regime."[7] It is often said that the Derg consisted of 120 soldiers,[8] a statement which has gained wide acceptance due to the habitual secretiveness of the Derg in its early years. But, Bahru Zewde notes that "in actual fact, their number was less than 110",[7] and Aregawi Berhe mentions two different sources which record 109 persons as being members of the Derg.[9] No new members were ever admitted, and the number decreased, especially in the first few years, as some members were expelled or killed.

The committee elected Major Mengistu Haile Mariam as its chairman and Major Atnafu Abate as its vice-chairman. The Derg was initially supposed to study the grievances of various military units, investigate abuses by senior officers and staff, and to root out corruption in the military.

In the months following its founding, the Derg steadily accrued more power. In July the Derg obtained key concessions from the emperor, Haile Selassie, which included the power to arrest not only military officers, but government officials at every level. Soon both former Prime Ministers Tsehafi Taezaz Aklilu Habte-Wold and Endelkachew Makonnen, along with most of their cabinets, most regional governors, many senior military officers and officials of the Imperial court were imprisoned. In August, after a proposed constitution creating a constitutional monarchy was presented to the emperor, the Derg began a program of dismantling the imperial government in order to forestall further developments in that direction. The Derg deposed and imprisoned the emperor on September 12, 1974.

On September 15, the committee renamed itself as the Provisional Military Administrative Council (PMAC) and took control of the government. The Derg chose Lieutenant General Aman Andom, a popular military leader and a Sandhurst graduate,[10] to be its chairman and acting head-of-state. This was pending the return of the Crown Prince Asfaw Wossen from medical treatment in Europe, when he would assume the throne as a constitutional monarch. However, General Aman Andom quarreled with the radical elements in the Derg over the issue of a new military offensive in Eritrea and their proposal to execute the high officials of Selassie's former government.

After eliminating units loyal to him — the Engineers, the Imperial Bodyguard and the Air Force — the Derg removed General Aman from power and executed him on November 23, 1974, along with some supporters and 60 officials of the previous Imperial government.[11] Brigadier General Tafari Benti became both the new Chairman of the Derg and head of state, with Mengistu and Atnafu Abate as his two vice-Chairmen, both with promotions to the rank of Lieutenant-Colonels. The monarchy was formally abolished in May 1975, and Marxism-Leninism was proclaimed the ideology of the state. Emperor Haile Selassie died on August 22, 1975 while his personal physician was absent. It is commonly believed that Mengistu killed him, either ordering it done or by his own hand.[12]

After internal conflicts that resulted in the executions of General Tafari Benti and several of his supporters by November 1977, and the later execution of Colonel Atnafu Abate, Mengistu gained undisputed leadership of the Derg. In 1987 he formally dissolved the Derg, and established the country as the People's Democratic Republic of Ethiopia (PDRE) under a new constitution.

Many of the Derg members remained in key government posts, and also served as the members of the Central Committee and the Politburo of the Workers' Party of Ethiopia (WPE). This became Ethiopia's civilian version of the Eastern bloc Communist parties. Mengistu became Secretary General of the WPE, President of the PDRE, while remaining Commander in Chief of the Armed Forces. 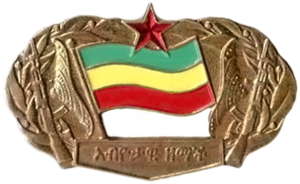 Opposition to the reign of the Derg was the cause of the Ethiopian Civil War. This conflict began as extralegal violence between 1975 and 1977, known as the Red Terror, when the Derg struggled for authority, first with various opposition groups, then with a variety of groups jockeying for the role of vanguard party. Though human rights violations were committed by both sides, the great majority of abuses against civilians as well as actions leading to devastating famine were committed by the government.[13]

Once the Derg had gained victory over these groups and successfully fought off an invasion from Somalia in 1977, it engaged in a brutal war against armed opponents. These groups included guerrillas fighting for Eritrean independence, rebels based in Tigray (which included the nascent Tigrayan Peoples' Liberation Front), and other groups that ranged from the conservative and pro-monarchy Ethiopian Democratic Union to the far leftist Ethiopian People's Revolutionary Party. Under the Derg, Ethiopia became the Soviet bloc's closest ally in Africa, and became among the best armed nations of the region as a result of massive military aid, chiefly from the Soviet Union, East Germany, Cuba and North Korea.

On 4 March 1975, the Derg announced a program of land reform, according to its main slogan of "Land to the Tiller," which "was unequivocally radical, even in Soviet and Chinese terms. It nationalized all rural land, abolished tenancy, and put peasants in charge of enforcing the whole scheme."[14] Although the Derg gained little respect during its rule, this reform resulted in a rare show of support for the junta, as the Ottaways describe:

"During a massive demonstration in Addis Ababa immediately following the announcement, a group of students broke through police and army barriers, climbed the wall and escarpment around Menelik Palace, and embraced major Mengistu as the hero of the reform".[15]

In addition, the Derg in 1975 nationalized most industries and private and some-what secure urban real-estate holdings.

But, mismanagement, corruption, and general hostility to the Derg's violent rule, coupled with the draining effects of constant warfare with the separatist guerrilla movements in Eritrea and Tigray, led to a drastic fall in general productivity of food and cash crops. In October 1978, the Derg announced the National Revolutionary Development Campaign to mobilize human and material resources to transform the economy, which led to a Ten-Year Plan (1984/85-1993/94) to expand agricultural and industrial output, forecasting a 6.5% growth in GDP and a 3.6% rise in per capita income. Instead, per capita income declined 0.8% over this period.[16] Famine scholar Alex de Waal observes that while the famine that struck the country in the mid-1980s is usually ascribed to drought, "closer investigation shows that widespread drought occurred only some months after the famine was already under way."[17] Hundreds of thousands fled economic misery, conscription, and political repression, and went to live in neighboring countries and all over the Western world, creating an Ethiopian diaspora for the first time.

The famine in the mid-1980s brought the political situation in Ethiopia to the attention of the world, and inspired charitable drives in western nations, notably by Oxfam and the Live Aid concerts of July 1985. The money they raised was distributed among NGOs in Ethiopia. A controversy arose when it was found that some of these NGOs were under Derg control or influence, and that some Oxfam and Live Aid money had been used to fund the Derg's enforced resettlement programmes, under which they displaced millions of people and killed between 50,000 and 100,000.[18] A BBC investigation reported that rebels had used millions of pounds of aid to buy arms; these accusations were later fully retracted by the Corporation.[19]

End of the Derg 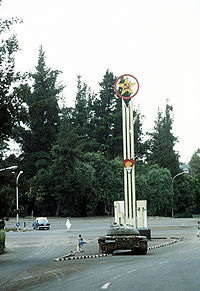 Although the Derg government officially came to an end 22 February 1987, three weeks after a referendum approved the constitution for the PDRE, it was not until that September the new government was fully in place and the Derg formally abolished.[20] The surviving members of the Derg remained in power as the leaders of the new civilian regime.

The geopolitical situations turned unfavorable for the communist government in the late 1980s, with the Soviet Union retreating from the expansion of Communism under Mikhail Gorbachev's glasnost and perestroika. Socialist bloc countries drastically reduced their aid to Ethiopia, struggling to keep their own economies going. This resulted in even more economic hardship, and the military gave way in the face of determined onslaughts by guerrilla forces in the north. The Soviet Union stopped aiding the PDRE altogether in December 1990. Together with the fall of Communism in the Eastern Bloc in the Revolutions of 1989, this was a serious blow to the PDRE.

Towards the end of January 1991, a coalition of rebel forces, the Ethiopian People's Revolutionary Democratic Front (EPRDF) captured Gondar, the ancient capital city, Bahar Dar, and Dessie. Meanwhile, the Eritrean People's Liberation Front had gained control of all of Eritrea except for Asmara and Assab in the south. The Soviet Union, mired in its internal turmoil, could no longer prop up the Derg.[21] In the words of the former US diplomat Paul B. Henze, "As his doom became imminent, Mengistu alternated between vowing resistance to the end and hinting that he might follow Emperor Tewodros's example and commit suicide."[22] His actions were frantic: he convened the Shengo, the Ethiopian Parliament, for an emergency session and reorganized his cabinet, but as Henze concludes, "these shifts came too late to be effective."[22] On 21 May, claiming that he was going to inspect troops at a base in southern Ethiopia, Mengistu slipped out of the country to Kenya. From there he flew with his immediate family to Zimbabwe, where he was granted asylum and as of 2010[update] still resides.

Upon entering Addis Ababa, the EPRDF immediately disbanded the WPE and arrested almost all of the prominent Derg officials shortly after. In December 2006, 73 officials of the Derg were found guilty of genocide. Thirty-four people were in court, 14 others had died during the lengthy process, and 25, including Mengistu, were tried in absentia.[23] The trial ended 26 May 2008, and many of the officials were sentenced to death. In December 2010, the Ethiopian government commuted the death sentence of 23 Derg officials. On October 4, 2011, 16 former Derg officials were freed, after twenty years of incarceration. The Ethiopian government paroled almost all of those Derg officials who had been jailed for 20 years.