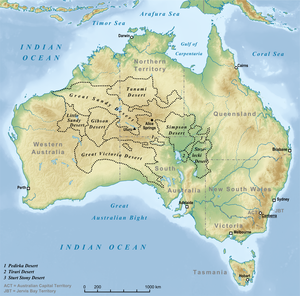 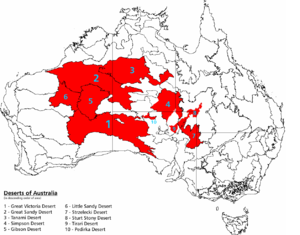 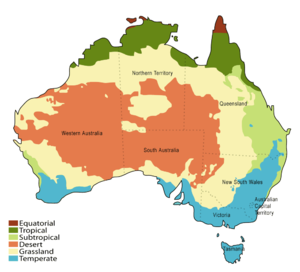 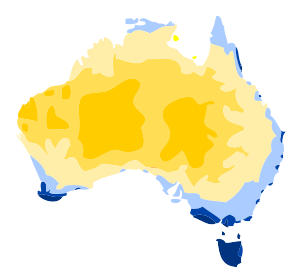 Named deserts of Australia cover 1,371,000 square kilometres (529,000 sq mi), or 18% of the Australian mainland. However, approximately 35% of the Australian continent receives so little rain it is effectively desert. The deserts in Australia are primarily distributed throughout the western plateau and interior lowlands of the continent.[1]

By international standards Australian deserts receive relative high rates of rainfall.[2] No weather station situated in an arid region records less than 100 mm of average annual rainfall.[3] The deserts of Australia, particularly in the interior, lack any significant summer rains.[2]

Deserts are not necessarily completely devoid of vegetation, but have large areas where vegetation is very limited in height or extent. 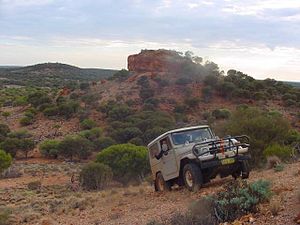 A four-wheel drive vehicle in the Gibson Desert

The Gibson Desert lies in central Western Australia. The desert is about 156,000 square kilometres (60,000 sq mi) in size. Most of the inhabitants of the area are Indigenous Australians.

Australia's climate is mostly determined by the hot, sinking air of the subtropical high pressure belt.[4] Dry conditions are associated with an El Niño–Southern Oscillation in Australia. Vegetation in arid areas is primarily dependent upon soil type.[4]

Extensive areas are covered by longitudinal dunes. Forty percent of Australia is covered by dunes.[4] Central Australia is very dry, averaging 150 mm of rainfall each year.[4]

Many introduced species have affected the fauna and flora of Australia's desert regions. The Australian feral camel affects native vegetation. This is partly because Australian desert vegetation evolved without any major herbivores present.[4] Uncontrolled access to more sensitive areas by four-wheel-drive vehicles is also an issue.