From Infogalactic: the planetary knowledge core
Jump to: navigation, search
This article is about the destrier, a type of war horse. For information about other Medieval horses, see Horses in the Middle Ages. For the album by Agent Fresco, see Destrier (album).

Mounted on a destrier, William Marshal unseats an opponent during a joust.

The destrier is the best-known war horse of the medieval era. It carried knights in battles, tournaments, and jousts. It was described by contemporary sources as the Great Horse, due to its significance.

The word destrier is derived from the Vulgar Latin dextarius, meaning "right-sided" (the same root as dexterous and dexterity). This may refer to it being led by the squire at the knight's right side (or led by the right hand) or to the horse's gait, (possibly leading with the right).[1]

While highly prized by knights and men-at-arms, the destrier was not very common.[2] Most knights and mounted men-at-arms rode other war horses, such as coursers and rounceys.[3] These three types of horse were often referred to generically as chargers.

Characteristics of the destrier

The word destrier does not refer to a breed, but to a type of horse: the finest and strongest warhorse. These horses were usually stallions, bred and raised from foalhood specifically for the needs of war. The destrier was also considered the most suited to the joust; coursers seem to have been preferred for other forms of warfare.[4] They had powerful hindquarters, able to easily coil and spring to stop, spin, turn or sprint forward. They also had a short back and well-muscled loin, strong bone, and a well-arched neck. From medieval art, the head of the destrier appears to have had a straight or slightly convex profile, strong, wide jaw, and good width between the eyes.

The destrier was specifically for use in battle or tournament; for everyday riding, a knight would use a palfrey, and his baggage would be carried on a sumpter horse (or packhorse), or possibly in wagons.

Breeding and size of the destrier 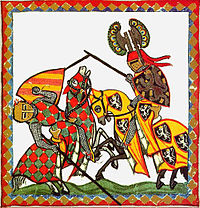 Caparisoned horses competing in a joust. Codex Manesse
For more details on this topic, see Horses in the Middle Ages.

Much speculation has taken place about the nature of destriers and about the size they attained. They apparently were not enormous draft types.[5] Recent research undertaken at the Museum of London, using literary, pictorial and archeological sources, suggests war horses (including destriers) averaged 14–15 hands, and differed from a riding horse in their strength, musculature and training, rather than in their size.[6] An analysis of medieval horse armour located in the Royal Armouries indicates the equipment was originally worn by horses of 15 to 16 hands,[7] about the size and build of a modern field hunter or ordinary riding horse.[8]

It is probable that the modern Percheron draft breed may in part descend from destriers, though it is probably taller and heavier than the average destrier. Other draft breeds such as the Shire claim destrier ancestry, though proof is less certain.

Equestrian statues in Italy suggest a "Spanish" style of horse that today would be referred to as a Baroque horse, such as the Andalusian horse, Friesian horse, or even a heavy but agile warmblood breed such as the Irish Draught. Modern estimates put the height of a destrier at no more than 16 hands, though with a strong and heavy physique.[9] Though the term "Great Horse" was used[by whom?] to describe the destrier, leading some historians to speculate that such animals were the forerunners of modern draught horse breeds,[10] the historical record does not support the image of the destrier as a draft horse.[11][9]

A good destrier was expensive. 7th century Salic law gives a price of 12 solidi as weregild, or reparational payment, for a war horse, compared to 3 solidi for a sound mare or 1 solidus for a cow. In later centuries destriers became even more expensive: the average value of each of the horses in a company of 22 knights and squires in the county of Flanders in 1297 compares to the price of seven normal coursers.[13] The price of these destriers varied between 20 and 300 livres parisis (parisian pounds), compared to 5 to 12 livres for a normal courser.