From Infogalactic: the planetary knowledge core
(Redirected from Destruction of Carthage)
Jump to: navigation, search 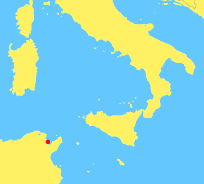 The location of Carthage

The Battle of Carthage was the main engagement of the Third Punic War between the Punic city of Carthage in Africa and the Roman Republic. It was a siege operation, starting sometime between 149 and 148 BC, and ending in spring 146 BC with the sack and complete destruction of the city of Carthage.

After a Roman army under Manius Manilius landed in Africa in 149 BC, Carthage surrendered and handed over hostages and arms. However, the Romans demanded the complete surrender of the city, and surprisingly to the Romans the city refused, the faction advocating submission overturned by one in favor of defense.

The Carthaginians manned the walls and defied the Romans, a situation which lasted for two years. In this period, the 500,000 Carthaginians inside the wall transformed the town into a huge arsenal. They produced about 300 swords, 500 spears, 140 shields and 1,000 projectiles for catapults daily.[1]

The Romans elected the young but popular Scipio Aemilianus as consul, a special law being passed to lift the age restriction. Scipio restored discipline, defeated the Carthaginians at Nepheris, and besieged the city closely, constructing a mole to block the harbor.

In spring 146 BC, the Romans broke through the city wall but they were hard-pressed to take the city. Every building, house and temple had been turned into a stronghold and every Carthaginian had taken up a weapon. The Romans were forced to move slowly, capturing the city house by house, street by street and fighting each Carthaginian soldier who fought with courage born of despair. Eventually after hours upon hours of house-to-house fighting, the Carthaginians surrendered. An estimated 50,000 surviving inhabitants were sold into slavery. The city was then leveled. The land surrounding Carthage was eventually declared ager publicus (public land), and it was shared between local farmers, and Roman and Italian ones.

Before the end of the battle, a dramatic event took place: 900 survivors, most of them Roman deserters, had found refuge in the temple of Eshmun, in the citadel of Byrsa, although it was already burning. They negotiated their surrender, but Scipio Aemilianus expressed that forgiveness was impossible either for Hasdrubal, the general who defended the city, or for the defectors. Hasdrubal then left the Citadel to surrender and pray for mercy (he had tortured Roman prisoners in front of the Roman army[2]). At that moment Hasdrubal's wife allegedly went out with her two children, insulted her husband, sacrificed her sons and jumped with them into a fire that the deserters had started.[3] The deserters too then hurled themselves into the flames,[3] upon which Scipio Aemilianus began weeping. He recited a sentence from Homer's Iliad,[4] a prophecy about the destruction of Troy, that could be applied now to Carthage's end. Scipio declared that the fate of Carthage might one day be Rome's.[5][6] In the words of Polybius:

Scipio, when he looked upon the city as it was utterly perishing and in the last throes of its complete destruction, is said to have shed tears and wept openly for his enemies. After being wrapped in thought for long, and realizing that all cities, nations, and authorities must, like men, meet their doom; that this happened to Ilium, once a prosperous city, to the empires of Assyria, Media, and Persia, the greatest of their time, and to Macedonia itself, the brilliance of which was so recent, either deliberately or the verses escaping him, he said:

A day will come when sacred Troy shall perish,
And Priam and his people shall be slain.

And when Polybius speaking with freedom to him, for he was his teacher, asked him what he meant by the words, they say that without any attempt at concealment he named his own country, for which he feared when he reflected on the fate of all things human. Polybius actually heard him and recalls it in his history.[7]

Since the 19th century, various historians have claimed that the Romans plowed over the city and sowed salt into the soil after destroying it, but this is not supported by ancient sources.[8]