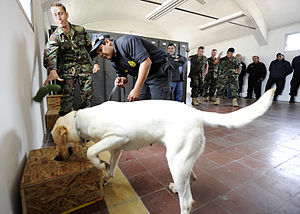 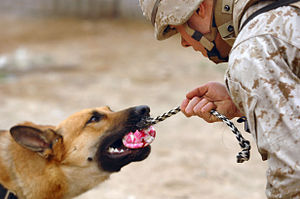 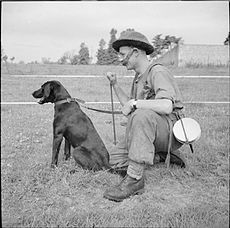 An explosive detection dog with a member of the British Royal Engineers (France, 1944). Such dogs were used during World War 2 to find German "Shoe Mines", which were made from wood and otherwise difficult to detect[1] 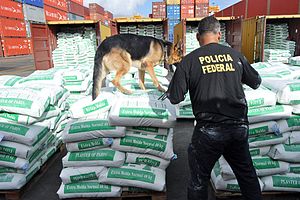 A detection dog or sniffer dog is a dog that is trained to and works at using its senses (almost always the sense of smell) to detect substances such as explosives, illegal drugs, wildlife scat, or blood. Hunting dogs that search for game and search dogs that search for missing humans are generally not considered detection dogs. There is some overlap, as in the case of cadaver dogs, trained to search for human remains. Some police dogs that are used in drug raids are trained not only to locate narcotics, but also persons who may be hiding from the police, as well as stashed currency. Some detector dogs can locate contraband electronics, such as illicit mobile phones in prisons.[2]

In recent years, detection dogs have emerged as a valuable research tool for wildlife biologists. In California, dogs are trained to detect the quagga mussel on boats at public boat ramps, as it is an invasive species. Sniffer dogs have also been enlisted to find bumblebee nests. Other studies have employed detection dogs for the purposes of finding and collecting the feces of a diverse array of species, including caribou,[3] black-footed ferret, killer whale, and Oregon spotted frog. 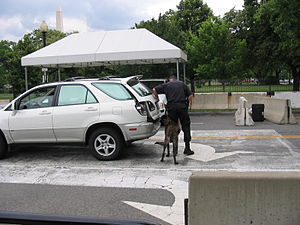 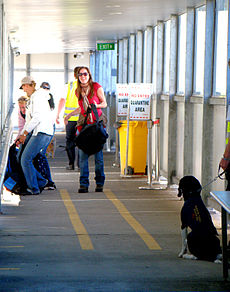 Fruit inspection line-up in Devonport, Tasmania. Passengers leave their luggage between the yellow lines and the dog searches the luggage by smelling for fruit (2008)

Detection dogs have been trained to search for many things, both animate and inanimate, including:

One notable quality of detection dogs is that they are able to discern individual scents even when the scents are combined or masked by other odors. In one case at an Australian prison, a detection dog foiled an attempt to smuggle drugs that had been hidden in a woman's bra and smeared with coffee, pepper and Vicks Vapo-rub.[citation needed] A sniffer dog can detect blood even if it has been scrubbed off surfaces.

In one study, sniffer dogs had a 97.5% correct positive indication rate on detecting bed bugs (Cimex lectularius) and their eggs – with zero false positives – all while accurately distinguishing them from carpenter ants, cockroaches and termites. They could detect as few as a single adult specimen or five viable eggs, and were also able to discriminate live bed bugs and viable bed bug eggs from dead bed bugs, cast skins, and feces, with a 95% correct positive indication rate, with only a 3% false positive rate on bed bug feces.[8]

Their use has been criticized as allowing the police to conduct searches without cause, in a manner that is unregulated.[9][10] They have been criticized as a form of show-policing, motivated more by the state's desire to be seen to be doing something than any serious attempt to respond to the dangers of drug use.[11]

In 2001 the Australian state of New South Wales introduced legislation to provide police with powers to use drug detection dogs without a warrant in public places such as licensed venues, music festivals and public transport.[12] Repealed in 2005, it was reviewed in 2006 by the New South Wales Ombudsman, who handed down a report highly critical of the use of dogs for drug detection. The report stated that prohibited drugs were found in only 26% of searches following an indication by a drug sniffer dog. Of these, 84% were for small amounts of cannabis deemed for personal use. The report also found that the legislation was ineffective at detecting persons in supply of prohibited drugs, with only 0.19% of indications ultimately leading to a successful prosecution for supply.[13][14]

During a 3-year period (from 2008) "probably more than 1000 pupils in about 90 classrooms" had been subjected to a drug dog coming into a classroom" where it was "voluntary for pupils to be present with the drug dog, but those who want to leave the classroom must answer some questions to police".[15] An article in Tidsskrift for strafferett, Norway's journal of criminal law, claims that such searches breach Norwegian law.[15]

In 2011, the Chicago Tribune reviewed the traffic stop data from Chicago-area police departments, and found that "false alerts" were strongly biased against Hispanic suspects.[16] For example, in Naperville, Illinois, an average of 47% of all positive detection dog alerts resulted in subsequent discovery of narcotic drugs or drug paraphernalia. Looking specifically at Hispanic suspects, however, only 8% of the dogs' positive alerts resulted in similarly fruitful searches. The report concedes that some – but not all – of this disparity can be attributed to "residual odors", which linger even after contraband is removed from the vehicle. But given that the dogs themselves harbor no racial bias, the Tribune concludes that the dogs' response is influenced by the biases and behaviors of their handlers. Further still, the report points to the fact that very few states have mandatory training, testing or certification standards.[16]

In June 2012, three Nevada Highway Patrol officers filed suit against Nevada's Director of Public Safety, alleging that he destroyed the police dog program by intentionally training canines to be "trick ponies" – to falsely alert based on cues from their handlers – so as to enable officers to conduct illegal searches of vehicles. The lawsuit claims that in so doing, he and other top Highway Patrol officers had violated the federal Racketeer Influenced and Corrupt Organizations (RICO) Act.[17]

Bed bug detection dogs are specially trained by handlers to identify the scent of bed bugs.

With the increased focus on green pest management and integrated pest management, bed bug detection dogs are gaining popularity in North America. Dogs are a safer alternative to pesticide use as a management strategy. If operators can find out exactly where bed bugs are located, they can minimize the area that needs to be sprayed. Dogs smell in parts per trillion, something a human cannot do, and detect bed bugs through all life cycle phases from eggs to nymphs to adults.

Bed bug detection dogs are a viable and scientifically-proven alternative to traditional methods of pest detection. A 2008 report by the University of Kentucky Department of Entomology endorsed bed bug detection dogs by stating that the “reliability of the dogs has been impressive provided they are properly trained.”[19] Scientists at the university reviewed studies on the dogs and concluded that although expensive for operators, canine detection dogs were promising.

Bed bug detection is complicated by the fact that the insects can hide almost anywhere. Bed bug detection dogs solve this problem because they are small and agile, finding bugs in places humans cannot such as wall voids, crevices and furniture gaps.

With the increase in global travel and shared living accommodations, bed bugs have become more prevalent. The U.S. Environmental Protection Agency held a bed bug summit[20] in April 2009 to address the ongoing problem of bed bugs and how to eradicate them. The certification of bed bug detection dogs was discussed.

Scat is abundant in the wild and contains valuable data.[21][22] Additionally, it represents a fairly non-invasive method of study for many species where previously live-capture predominated. Compared with other methods of scat collection, dogs are able to survey larger areas in less time, at decreased costs.[23] Detection dogs have also been used with success to locate killer whale feces,[24] northern spotted owl pellets,[25] and salamanders.[26]