Detention is the process when a state or private citizen lawfully holds a person by removing his or her freedom of liberty at that time. This can be due to (pending) criminal charges being raised against the individual as part of a prosecution or to protect a person or property. Being detained does not always result in being taken to a particular area (generally called a detention centre), either for interrogation, or as punishment for a crime (see prison). 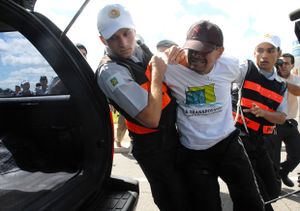 The term can also be used in reference to the holding of property, for the same reasons. The process of detainment may or may not have been preceded or followed with an arrest. The prisoners in Guantánamo Bay are for example referred to as "detainees".

Detainee is a term used by certain governments and their armed forces to refer to individuals held in custody, such as those it does not classify and treat as either prisoners of war or suspects in criminal cases. It is used to refer to "any person captured or otherwise detained by an armed force."[1] More generally, it is "someone held in custody."[2]

Article 9 of the Universal Declaration of Human Rights states that, "No one shall be subjected to arbitrary arrest, detention or exile." In wars between nations, detainees are referenced in the Fourth Geneva Convention.

Any form of imprisonment where a person's freedom of liberty is removed can be classed as detention, although the term is often associated with persons who are being held without warrant or charge before any have been raised. Being detained for the purposes of a drugs search is tantamount to a temporary arrest, as it is not yet known whether charges can be brought against an individual, pending the outcome of the search. The term 'detained' often refers to the immediacy when someone has their liberty deprived, often before an arrest or pre-arrest procedure has yet been followed. For example, a shoplifter being pursued and restrained, but not yet informed he/she is under arrest or read his rights would be classed as 'detained'.

Detention of a suspect

The detention of suspects is the process of keeping a person who has been arrested in a police-cell, remand prison or other detention centre before trial or sentencing.

The length of detention of suspected terrorists, with the justification of taking an action that would aid counter-terrorism, varies according to country or situation, as well as the laws which regulate it.

The Terrorism Act 2006 in the United Kingdom lengthened the 14-day limit for detention without an arrest warrant or an indictment from the Terrorism Act 2000 to 28 days. A controversial Government proposal for an extension to 90 days was rejected by the House of Commons. English criminal law requires the detainer/arrestor to have reasonable grounds to suspect (reasonable suspicion) when detaining (or arresting) someone.

Indefinite detention of an individual occurs frequently in wartime under the laws of war. This has been applied notably by the United States after the September 11, 2001 attacks. Before the Combatant Status Review Tribunals, created for reviewing the status of the Guantanamo detainees, the United States has argued that they are engaged in a legally recognizable armed conflict to which the laws of war apply, and that it therefore may hold captured al Qaeda and Taliban operatives throughout the duration of that conflict, without granting them a criminal trial.

The U.S. military regulates treatment of detainees in the manual Military Police: Enemy Prisoners of War, Retained Personnel, Civilian Internees and Other Detainees, last revised in 1997.

The term "unlawful combatant" came into public awareness during and after the War in Afghanistan (2001–present), as the U.S. detained members of the Taliban and al-Qaeda captured in that war, and determined them to be unlawful combatants. This had generated considerable debate around the globe.[3] The U.S. government refers to these captured enemy combatants as "detainees" because they did not qualify as prisoners of war under the definition found in the Geneva Conventions.

Under the Obama administration the term enemy combatants was also removed from the lexicon and further defined under the 2010 Defense Omnibus Bill: