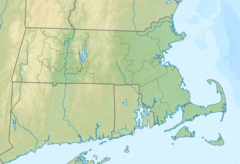 The Deutsche Bank Championship is a professional golf tournament on the PGA Tour, held annually over the Labor Day weekend.

This PGA tournament made its debut in 2003 and is held at the Tournament Players Club of Boston in Norton, Massachusetts, south-southwest of Boston. Unlike most PGA Tour events which are played Thursday through Sunday, this tournament is played Friday through Monday, with the final round on Labor Day.

The tournament became part of the FedEx Cup playoffs in 2007, with an accompanying $1.5 million increase in the purse to $7 million. The top 100 players in the FedEx Cup points list qualify for the event. FedEx Cup points are amassed during the regular PGA Tour season and in the first playoff event, The Barclays, which takes place the previous week. The purse for 2012 is $8 million with $1.44 million to the winner. The title sponsor, Deutsche Bank, has announced it will sponsor this event in Boston through 2016.[1]

The event is currently managed by the Tiger Woods Foundation.[2]

With the tournament's scheduling, ending on a Monday, network coverage has always taken place on Sunday and Monday, instead of the usual Saturday and Sunday used at all other events. Cable networks have always covered the Friday and Saturday rounds. The event's first network partner was ABC Sports, which covered the Championship from June 2003, though the 2006 event was covered under the "ESPN on ABC" banner. Since 2007, the event has been covered by NBC Sports, though the 2011 and 2012 events were covered under the "Golf Channel on NBC" banner.

1Sudden-death playoff in 2011 was won on the second extra hole.