From Infogalactic: the planetary knowledge core
Jump to: navigation, search
This article is about the German international broadcaster. For the unrelated German radio company of the 1920s and 30s, see Deutsche Welle GmbH. For information about the musical genre, see Neue Deutsche Welle. 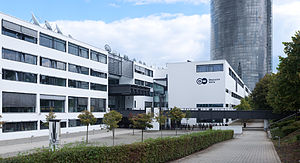 The Deutsche Welle building in Bonn

Deutsche Welle (German pronunciation: [ˈdɔʏtʃə ˈvɛlə]; "German Wave" in German) or DW is Germany's state run international broadcaster. The service is aimed towards audiences outside of Germany and is available via television, radio and the Internet. DW Radio broadcasts news and information in thirty languages and the satellite television service consists of channels in English, German, Spanish and Arabic.

DW also offers regularly updated articles on its online news website and runs its own center for international media development, DW Akademie. The broadcaster's stated goals are to convey Germany as a "liberal, democratic state based on the rule of law", to produce reliable news coverage and to provide access to the German language.[1]

Deutsche Welle has been broadcasting since 1953. It is headquartered in Bonn, where its radio programmes are produced. Television broadcasts are produced almost entirely in Berlin. The responsibility for DW's news website is shared between the two locations.

Around 3,000 people work for Deutsche Welle in over 60 countries. According to DW, its output reaches 100 million people worldwide every week. The broadcaster's director general is Peter Limbourg.

Deutsche Welle first shortwave broadcast took place on 3 May 1953 with an address by the then West German President, Theodor Heuss. On 11 June 1953 the public broadcasters in the ARD signed an agreement to share responsibility for Deutsche Welle. At first it was controlled by Nordwestdeutscher Rundfunk (NWDR). In 1955, when this split into the separate Norddeutscher Rundfunk (NDR) and Westdeutscher Rundfunk (WDR) networks, WDR assumed responsibility for Deutsche Welle programming. In 1960 Deutsche Welle became an independent public body after a court ruled that broadcasting from Germany was part of the federal government's foreign-affairs function. On 7 June 1962 DW joined ARD as a national broadcasting station. Deutche Welle had been headquartered in the West German city of Köln until after reunification, at which time much of the government relocated to Berlin and the station moved to those vacated buildings in Bonn.

With German reunification in 1990, Radio Berlin International (RBI) of East Germany ceased to exist. Some of the staff of RBI joined Deutsche Welle and it inherited some broadcasting apparatus, including the transmitting facilities at Nauen as well as RBI's frequencies.

DW (TV) began as RIAS-TV, a television station launched by the West Berlin broadcaster RIAS (Radio in the American Sector / Rundfunk im Amerikanischen Sektor) in August 1988. The fall of the Berlin Wall the following year and German reunification in 1990 meant that RIAS-TV was to be closed down. On 1 April 1992 Deutsche Welle inherited the RIAS-TV broadcast facilities, using them to start a German- and English-language television channel broadcast via satellite, DW (TV), adding a short Spanish broadcast segment the following year. In 1995 it began 24-hour operation (12 hours German, 10 hours English, two hours Spanish). At that time DW (TV) introduced a new news studio and a new logo.

Deutsche Welle took over some of the former independent radio broadcasting service Deutschlandfunk's foreign-language programming in 1993, when Deutschlandfunk was absorbed into the new Deutschlandradio.

In addition to radio and television programming, DW sponsored some published material. For example, the South-Asia Department published German Heritage: A Series Written for the South Asia Programme in 1967 and in 1984 published African Writers on the Air. Both publications were transcripts of DW programming.

In September 1994 Deutsche Welle was the first public broadcaster in Germany with a World Wide Web presence, initially www-dw.gmd.de, hosted by the GMD Information Technology Research Center. For its first two years the site listed little more than contact addresses, although DW's News Journal was broadcast in RealAudio from Real's server beginning in 1995, and the Süddeutsche Zeitung's initial web presence, which included news articles from the newspaper, shared the site. In around 1998 it evolved into a news website under the URL dwelle.de; in 2001 the URL later changed to www.dw-world.de and switched to www.dw.de in 2012. Deutsche Welle purchased the dw.com URL, which previously belonged to DiamondWare, in 2013; DW had attempted to claim ownership of the address in 2000, without success. DW would eventually move to www.dw.com domain on 22 June 2015.

In 2001 Deutsche Welle (in conjunction with ARD and ZDF) founded the German TV subscription TV channel for North American viewers. The project was shut down after four years owing to low subscriber numbers. It has since been replaced by the DW-TV channel (also a subscription service).

Unlike most other international broadcasters, DW-TV doesn't charge terrestrial stations for use of its programming, and as a result its News Journal and other programmes are rebroadcast on numerous public broadcasting stations in several countries, including United States, Australia and New Zealand. In the Philippines it is shown nationwide on Net 25.

Deutsche Welle is still suffering from financial and staffing cuts. Its budget was reduced by about €75 million over five years and of the 2,200 employees it had in 1994 only 1,200 remain. Further cuts are still expected.

In 2003 the German government passed a new "Deutsche Welle Law", which defined DW as a tri-media organization, making the Deutsche Welle website an equal partner with DW-TV and DW Radio. The website is available in 30 languages, but focuses on German, English, Spanish, Russian, Brazilian Portuguese, Chinese and Arabic. Persian became the eighth focus language in 2007.

In August 2009 DW-TV's carriage in the United Kingdom on Sky channel 794 ceased, although the channel continues to be available via other European satellites receivable in the UK.[12]

In 2011, DW announced a major reduction of service including the closure of most of its FM services in the Balkans (except for Romani) but that it would expand its network of FM partners in Africa. The radio production for Hausa, Kiswahili, French and Portuguese for Africa were optimized for FM broadcasts and DW also produce a regional radio magazine daily in English, to be rebroadcast by partners in Africa.

Audio content in Arabic is distributed online, via mobile or rebroadcast by partners.

DW announced it would focus on FM partnerships for Bengali, Urdu, Dari/Pashtu and Indonesian for South Asia, India, Pakistan and Afghanistan.

On 1 November 2011, DW discontinued shortwave broadcasts in German, Russian, Persian and Indonesian and ended its English service outside of Africa. Chinese programming was reduced from 120 minutes to 60 minutes a week. As of November 2011, DW only broadcast radio programming via shortwave in: Amharic, Chinese, Dari, English and French for Africa, Hausa, Kiswahili, Pashtu, Portuguese for Africa and Urdu.[13]

On 22 June 2015, DW TV launched a 24-hour English-language news channel with a new design and a new studio as part of a rebrand to 'DW News'. Previously, DW's news programmes were called 'Journal' and broadcast in English in 3, 15 and 30-minute blocks. The new channel offers 30-minute updates every hour and 60-minute programmes twice a day on weekdays. DW News broadcasts from Berlin but frequently has live social media segments hosted from a specially-designed studio in Bonn. The German, Spanish and Arabic channels also received a new design.

At the same time, DW's news website moved from a .de URL to .com and added a social media stream to its front page. The refreshed DW services were launched under the tagline 'Made for Minds'.

The Wertachtal site was authorized in 1972 and began service with four 500 kW transmitters. By 1989 there were 15 transmitters, four of which relayed the Voice of America.

The Nauen transmitter site was inherited from Radio Berlin International. RBI's Russian-made three 500 kW and one 100 kW transmitters were replaced by four Telefunken 500 kW transmitters and four rotatable antennas. Today Deutsche Welle no longer uses any of the transmitters based in Germany.

DW used a relay station in Malta had three SW and one 600 kW-MW transmitter and gave partial coverage of the Americas, Southern Asia and the Far East.[15] It was inaugurated on 29 July 1974 in exchange for a grant of almost 1 million GBP. The station closed in January 1996.

Formerly, DW shared a transmitting station on Antigua in the Caribbean with the BBC. It was inaugurated on 1 November 1976 and closed on 31 March 2005. It had a relay-exchange with the Canadian Broadcasting Corporation that allowed DW to use two 250 kW transmitters in Sackville, New Brunswick until that facility closed in 2012.[16]

DW Akademie is Deutsche Welle's international center for media development, media consulting and journalism training. It offers training and consulting services to partners around the world. It works with broadcasting stations, media organizations, and universities especially in developing- and transition countries to reinforce free and independent media. The work is funded mainly by the German Federal Ministry of Economic Cooperation and Development.[18]

The Master's Program "International Media Studies" offered in cooperation with the University of Bonn and the University Bonn-Rhein-Sieg of Applied Sciences is based at DW Akademie. The four-semester program combines the disciplines media development, media regulation, and communications. The seminars are held in English and German and the degree is aimed at media representatives from developing and transition countries.

The managing director of DW Akademie is Gerda Meuer, who has worked as a journalist for different media outlets and as a correspondent for Inter Press Service, a news agency focused on development issues.[20]