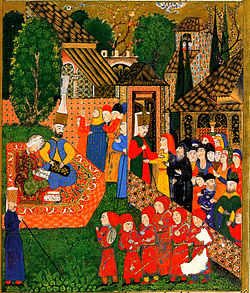 Illustration of the registration of Christian boys for the devşirme. Ottoman miniature painting, 1558.[1])

Devşirme[a] (literally "collecting" in Turkish), also known as the blood tax or tribute in blood, was chiefly the annual practice by which the Ottoman Empire sent military to abduct boys, ages eight to eighteen,[2] sons of their Christian subjects in the villages of the Balkans and Anatolia.[3] They were then converted to Islam[4] with the primary objective of selecting and training the ablest children for the military or civil service of the Empire, notably into the Janissaries.[5]

Started by Murad I as a means to counteract the growing power of the Turkish nobility, the practice itself violated Islamic law.[6] Yet by 1648, the practice was slowly drawing to an end. An attempt to re-institute it in 1703 was resisted by its Ottoman members who coveted its military and civilian posts. Finally in the early part of Ahmet III's reign, the practice of devşirme was abolished.

The Devşirme arose out of the kul system of slavery that developed in the early centuries of the Ottoman Empire and which reached this final development during the reign of Sultan Bayazit I.[7] The origin of the kuls was mostly prisoners of war or hostages or slaves purchased by the state.

The Ottoman Empire, beginning with Murad I, felt a need to "counteract the power of (Turkic) nobles by developing Christian vassal soldiers and converted kapıkulları as his personal troops, independent of the regular army."[8] The elite forces, which served the Ottoman Sultan directly, were divided into two main groups: cavalry and infantry.[b] The cavalry was commonly known as the Kapıkulu Süvari (The Cavalry of the Servants of the Porte) and the infantry were the popular Yeni Çeri (transliterated in English as Janissary), meaning "the New Corps".

At first, the soldiers to serve in these corps were selected from the slaves captured during warfare. However, the system commonly known as devşirme was soon adopted: in this system children of the rural Christian populations of the Balkans—particularly Albanians, Serbs, and northern Greeks—were conscripted before adolescence and were brought up as Muslims. Upon reaching adolescence, these children were enrolled in one of the four imperial institutions: the Palace, the Scribes, the Religious and the Military. Those enrolled in the Military would become either part of the Janissary corps, or part of any other corps.[9] The brightest were sent to the Palace institution (Enderun), and were destined for a career within the palace itself where the most able could aspire to attain the very highest office of state, that of Grand Vizier, the Sultan's immensely powerful chief minister and military deputy.

The life of the devşirme

The ideal age of a recruit was between 7 and 10 years of age,[10] although they recruited much younger boys. The devşirme system was locally resented[11] and was resisted, even to the point of disfiguring their sons.[12][13] On the other hand, as the devşirme were recruited to rise up to the grand vizier status (the second most powerful man in the empire), Christian parents in Bosnia were known to bribe scouts to take their children.[14] "The children were taken from their families and transported to Istanbul. Upon their arrival, they were converted to Islam, examined, and trained to serve the empire. This system produced infantry corps soldiers as well as civilian administrators and high-ranked military officials."[15]

Although the influence of Turkic nobility continued in the Ottoman court until Mehmet II (see Çandarlı Halil), the Ottoman ruling class slowly came to be ruled exclusively by the devşirme, creating a separate social class.[16] This class of rulers was chosen from the brightest of devşirme and hand-picked to serve in the Palace institution, known as the Enderun.[17] They had to accompany the Sultan on campaigns, but exceptional service would be rewarded by assignments outside the palace.[18] Those chosen for the Scribe institution, known as Kalemiye were also granted prestigious positions. The Religious institution, İlmiye, was where all orthodox Muslim clergy of the Ottoman Empire were educated and sent to provinces or served in the capital.[19]

Tavernier noted in 1678 that the Janissaries looked more like a religious order than a military corps.[20] The members of the organization were not banned from marriage, as Tavernier further noted, but it was very uncommon for them. He goes on to write that their numbers had increased to a hundred thousand, but this was because of a degeneration of regulations and many of these were in fact "fake" Janissaries, posing as such for tax exemptions and other social privileges. He notes that the actual number of Janissaries was in fact much lower (Shaw writes that their number was 30,000 under Suleiman the Magnificent[21]). By the 1650s there were more than 50,000 Janissaries who lived as homosexuals and practiced strict military discipline.[22][23] Recruits were sometimes gained through voluntary accessions, as some parents were often eager to have their children enroll in the Janissary service that ensured them a successful career and comfort.[24]

Albertus Bobovius wrote in 1686 that diseases were common among the devşirme and strict discipline was enforced.[25]

The BBC notes the following regarding the devşirme system: "Although members of the devshirme class were technically slaves, they were of great importance to the Sultan because they owed him their absolute loyalty and became vital to his power. This status enabled some of the 'slaves' to become both powerful and wealthy."[26] Yet this system was clearly illegal according to Islamic law, sharia.[27] Halil İnalcık writes that the devşirme were not actually considered to be slaves.[28]

According to Cleveland, the devşirme system offered "limitless opportunities to the young men who became a part of it."[29] Basilike Papoulia wrote that "...the devsirme was the 'forcible removal', in the form of a tribute, of children of the Christian subjects from their ethnic, religious and cultural environment and their transportation into the Turkish-Islamic environment with the aim of employing them in the service of the Palace, the army, and the state, whereby they were on the one hand to serve the Sultan as slaves and freedmen and on the other to form the ruling class of the State."[30] Accordingly, Papoulia agrees with Hamilton Alexander Rosskeen Gibb and Harold Bowen, authors of Islamic society and the West, that the devşirme was a penalization imposed on the Balkan peoples since their ancestors resisted the Ottoman invasion.[31] Vladimir Minorsky states, "The most striking manifestation of this fact is the unprecedented system of devshirme, i.e. the periodic conscription of 'tribute boys', by which the children of Christians were wrung from their families, churches, and communities to be molded into Ottoman praetorians owing their allegiance to the Sultan and the official faith of Islam."[32] This system as explained by Çandarlı Kara Halil Hayreddin Pasha, founder of the Janissaries, "The conquered are slaves of the conquerors, to whom their goods, their women, and their children belong as lawful possession".[33]

Ethnicity of the devşirme, and exemptions

The devşirme were collected once every four or five years from rural provinces in Balkans, and with a few exceptions, only from non-Muslims. The devşirme levy was not applied to the major cities of the empire, and children of local craftsmen in rural towns were also exempt, as it was considered that conscripting them would harm the economy.[34]

According to Bernard Lewis, the Janissaries were mainly recruited from the "Slavic and Albanian populations of the Balkans".[35] According to the Encyclopedia Britannica and the Encyclopaedia of Islam, in the early days of the empire all Christians were enrolled indiscriminately. Later, those from Albania, Greece, Bosnia, and Bulgaria were preferred.[36] What is certain is that devşirme were primarily recruited from Christians living in the Balkans, particularly Albanians, Greeks, and Slavs. However, Bosnian Muslims were also recruited and sent directly to serve in the Palace (rather than the military), under groups called "potor".[34][37] Well known examples of Ottomans who had been recruited as devşirme include Skanderbeg, Sinan Pasha and Sokollu Mehmed Pasha.[citation needed] The early Ottoman emphasis on recruiting Greeks, Albanians, and south Slavs was a direct consequence of being centred on territories, in northwestern Anatolia and the southern Balkans, where these ethnic groups were prevalent.[38]

Jews were exempt from this service and until recently Armenians were thought to have also been exempt.[39][40] However, Armenian manuscript colophons from the fifteenth to seventeenth centuries and foreign travelers of the time indicate that Armenians were not spared from the devşirme.[41][42]

The devşirme system declined in the 16th and 17th century due to a number of factors, including the inclusion of free Muslims in the system. After 1568 the "boy harvest" was only occasionally made. In 1632 the Janissaries attempted an unsuccessful coup against Murad IV, who then imposed a loyalty oath on them. In 1638[43] or 1648 the devşirme-based recruiting system of the Janissary corps formally came to an end.[44] In an order sent in multiple copies to authorities throughout the European provinces in 1666 a devşirme recruitment target of between 300 and 320 was set for an area covering the whole of the central and western Balkans.[45] On the accession of sultan Suleiman II in 1687 only 130 Janissary inductees were graduated to the Janissary ranks.[46] The system was finally abolished in the early part of Ahmet III's reign (1703–1730).[47]

After Napoleon invaded Egypt in 1798 there was a reform movement in Sultan Selim III's regime, to reduce the numbers of the askeri class, who were the first class citizens or military class (also called janissaries). Selim was taken prisoner and murdered by the Janissaries. The successor to the sultan, Mahmud II was patient but remembered the results of the uprising in 1807. In 1826 he created the basis of a new, modern army, the Asakir-i Mansure-i Muhammediye,[48] which caused a revolt among the Janissaries. The authorities kept them all in their barracks and slaughtered thousands of them.[49] This development entered the Ottoman history annals as the Auspicious Incident.

The response of society

The practice as to Janissary soldiers[50][51] was motivated by the desire to create an elite class of warriors loyal only to the Sultan, rather than to individual Ottoman nobles.