The Devil's Arrows are three standing stones or menhirs in an alignment erected near where the A1 road now crosses the River Ure at Boroughbridge in North Yorkshire, England (grid reference SE390666).

Erected in prehistoric times and distinctively grooved by millennia of rainfall, the tallest stone is 22 feet 6 inches in height making this the tallest menhir in the United Kingdom after the Rudston Monolith which is 25 feet tall.[1] The stones stand 150 feet from the A1 and it is thought that the alignment originally included up to five stones. William Camden mentions four stones in his Britannia, noting that "one was lately pulled downe by some that hoped, though in vaine, to finde treasure."[2] One was apparently displaced during a failed 'treasure hunt' during the 18th century and later used as the base for a nearby bridge over a river. The stones are composed of millstone grit, the most likely source of which is Plumpton Rocks two miles south of Knaresborough and about nine miles from where the stones stand today.[3]

The outer stones are 200 and 370 feet away from the central stone and form an alignment that is almost straight, running NNW-SSE. It is thought that they may have been arranged to align with the southernmost summer moonrise. The stones are part of a wider Neolithic complex on the Ure-Swale plateau which incorporates the Thornborough Henges. 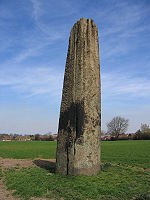 One of the Devil's Arrows.

The name comes from a legend, which goes back to 1721, that says the Devil threw the stones, aiming at the next town of Aldborough. He stood on Howe Hill and shouted, "Borobrigg keep out o' way, for Aldborough town I will ding down!". However, the stones fell short and landed near Boroughbridge instead.[1]