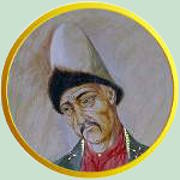 Devlet I Giray, Dolat Girai (Crimean Tatar: I Devlet Geray, ۱دولت كراى‎; Taht Alğan Devlet Geray, تخت آلغان دولت كراى‎) (1512–1577) was a khan of the Crimean Khanate during whose long reign (1551–1577) the khanate rose to the pinnacle of its power.

During the reign of his predecessor Sahib I Giray, Devlet Giray lived in Constantinople, where he won the favor of Sultan Suleiman the Magnificent. With the help of the Ottoman Turks, Devlet Giray was installed as the ruler of the Crimean Khanate in 1551. He is known to have been a skillful politician, who could always take advantage of auspicious conditions. Thus, Devlet Giray managed to secure his de facto independence from the Porte.

He successfully interfered with the Ottoman government's plans to construct a canal between the Volga and the Don Rivers, which would certainly strengthen the Turkish influence over Crimea. With an army of considerable size at his disposal, Devlet Giray constantly fought with his neighbors, mostly with Russia. His raids of 1555 and 1571 were especially devastating for Muscovy (he even managed to burn down Moscow during the 1571 campaign) but he suffered a crushing defeat in the Battle of Molodi in 1572.

The main purpose of his military campaigns was to annex Kazan and Astrakhan, lost by the Muslim world to the Russians in the previous years. Devlet Giray's attempts were unsuccessful, but still he managed to impose annual monetary and fur tributes on some of the Russians and Ukrainians living in the south.