Devshirme in the Ottoman Palace School

Devşirme in the Ottoman Palace School 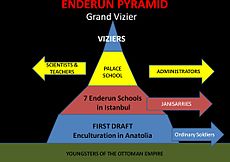 The primary objective of the Palace School was to train the ablest children for leadership positions, either as military leaders or as high administrators to serve the Devlet.[1] Although there are many resemblances between Enderûn and other palace schools of the previous civilizations, such as those of the Abbasids, and Seljuks [2] or the contemporary European palace schools, Enderûn was unique with respect to the background of the student body and its meritocratic system. In the strict draft phase (Devşirme), students were taken forcefully from the Christian population of the Empire (however, some Christian millets, such as the Armenians, were largely exempted) and were converted to Islam; Jews and Gypsies were exempted from Devshirme, and so were all Muslims, except those coming from Bosnia, who were incorporated into it in groups called potur, in Bosnian.

Those entrusted to find these children were scouts, who were specially trained agents, throughout the Empire's European lands. Scouts were recruiting youngsters according to their talent and ability with school subjects, in addition to their personality, character, and physical perfection. The Enderûn candidates were not supposed to be orphans, or the only child in their family (to ensure the candidates had strong family values); they must not have already learned to speak Turkish or a craft/trade. The ideal age of a recruit was between 10 and 20 years of age.[3] Mehmed Refik Beg mentioned that youth with a bodily defect, no matter how slight, was never admitted into palace service (as cited in: [4]), since Turks believed that a strong soul and a good mind could be found only in a perfect body.[5]

The selected children were dressed in red, so that they could not easily escape on their way to Constantinople. The cost of the devshirme service and their clothes were paid by their villages or communities. The boys were gathered into cohorts of a hundred or more to walk to Constantinople where they were circumcised and divided between the palace schools and the military training. Anyone not chosen for the palace spent years being toughened by hard labor on Anatolian farms until they were old enough for the military.[6]

The brightest youths who fit into the general guidelines and had a strong primary education were then given to selected Muslim families across Anatolia to complete the enculturation process.[7][8][9] They would later attend schools across Anatolia to complete their training for six to seven years in order to qualify as ordinary military officers.[10] They would get the highest salaries amongst the administrators of the empire, and very well respected in public.[11] M. Armağan,[12] defined the system as a pyramid which was designed to select the elite of the elite, the ablest and most physically perfect. Only a very few would reach the Palace School.