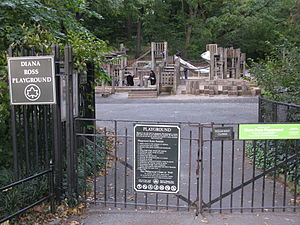 The entrance to the playground

The Diana Ross Playground is located in New York City's Central Park, inside the park at West 81st Street and Central Park West. Its namesake, the recording artist Diana Ross, who lives across the street in The Beresford, gave a fabled 1983 free concert in Central Park and pledged to fund the project with proceeds from the television rights; however, when this did not prove profitable, she used personal resources. Groundbreaking took place in September 1986, with both Ross and then-Mayor Ed Koch present. Ross reportedly called the event "one of the most fulfilling aspects of [her] life and career." [1]

Today, the playground is equipped with sturdy wood equipment, tire swings, a tube slide, a corkscrew slide, sandboxes, rope bridges, and a mushroom-style water feature. [2] Open daily from 7:30am to dusk, the space is maintained by the Central Park Conservancy Playground Partners program.

To the north of the playground, the ground rises in a steep slope[3] to Summit Rock, the highest point in Central Park. To the east, secluded in shrub plantings, is Tanner's Spring, one of two natural springs that remain in the park.[4] Its name commemorates Dr. Henry S. Tanner, a proponent of therapeutic fasting, who in the summer of 1880 elected to fast under constant observation for forty days and nights, supplied only by water from this spring.[5] M.M. Graff, in relating the story, observed "The legend quite naturally arose that the water of the spring contained some magically concentrated nutrients".[6] Before the construction of the park, the spring provided water for the community of Seneca Village, located to the north of Summit Hill, which at the time was called "Goat Hill".

With the release of the Diana Ross: For One and For All DVD of the iconic concert finally released on May 2012 by Shout Factory, the DNAinfo.com of New York selected the playground as one of New York's best.