Diane de Poitiers (3 September 1499 – 25 April 1566) was a French noblewoman and a prominent courtier at the courts of kings Francis I and his son, Henry II of France. She became notorious as the latter's favourite. It was in this capacity that she wielded much influence and power at the French Court, which continued until Henry was mortally wounded in a tournament accident, during which his lance wore her favour (ribbon) rather than his wife's.

The subject of paintings by François Clouet as well other anonymous painters, Diane was also immortalised in a statue by Jean Goujon.

She was born the daughter of Jean de Poitiers, Seigneur de Saint Vallier and Jeanne de Batarnay.[1] When still a girl, she was briefly in the retinue of Anne de Beaujeu,[2] eldest sister of King Charles VIII, a capable and highly intelligent woman who held the regency of France during his minority.[2]

Diane was educated according to the principles of Renaissance humanism which was popular at the time, music, hunting, manners, languages, the art of conversation, and dancing. She learned how to read Latin and Greek, and became a keen hunter and sportswoman,[2] remaining in good physical condition well into middle age.

In 1524, her father Jean, was accused of treason as an accomplice of the rebellious Connétable de Bourbon.[4] His death sentence was commuted, but he would be confined to prison until the Treaty of Madrid(1526).[4]

When Louis de Brézé died in 1531 in Anet,[4] Diane adopted the habit of wearing the colours of black and white, her personal trademark for the rest of her life.[6] These were among the permitted colours of mourning, which as a widow she was required to wear, but they were also the symbolic colours of the bright and dark sides of the moon. They played on her name, Diane, which derived from Diana, the name of the beautiful Roman goddess of the moon.[citation needed]

Her keen interest in financial matters and legal shrewdness now became apparent for the first time. She retained her late husband's emoluments as governor and grand-sénéchal of Normandy, assuming herself the title of "sénéchale de Normandie". She challenged in court the obligation to return Louis de Brézé's appanages to the royal domain. The king allowed her to enjoy the appanage's income "until the status of those lands has been totally clarified."[citation needed]

When still the wife of Louis de Brézé, she became lady-in-waiting to Queen Claude of France. After the queen died, she served in the same capacity to Louise of Savoy, then Eleanor of Austria.[7]

Life as a royal favourite 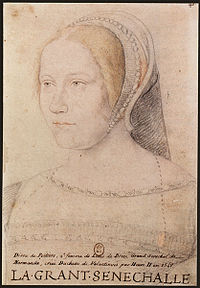 Anonymous sketch of Diane de Poitiers wearing a French hood, after a 1525 original.

After the capture of Francis I by Charles V's troops during the battle of Pavia (1525), the two eldest princes, Francis and Henry, were retained as hostages in Spain in exchange for their father. Because the ransom was not paid in time, the two boys (eight and seven at the time) had to spend nearly four years isolated in a bleak castle, facing an uncertain future. Henry found solace by reading the knight-errantry tale Amadis de Gaula. The experience may account for the strong impression that Diane made on him, as the very embodiment of the ideal gentlewomen he read about in Amadis. As his mother was already dead, Diane gave him the farewell kiss when he was sent to Spain.[8] At the tournament held for the coronation of Francis's new wife Eleanor in 1531, while the Dauphin of France saluted the new queen as expected, Henry addressed his salute to Diane.[8]

In 1533 Henry married Catherine de' Medici.[9] There had been opposition to this alliance, the Medicis being no more than upstarts in the eyes of many in the French court. Diane, however, approved of this choice of bride.[10] Diane and Catherine were actually related to one another,[11] being both descendants of the La Tour d'Auvergne family.[citation needed] As the future royal couple remained childless, concerned by rumours of a possible repudiation of a queen she had in control, Diane made sure that Henry's visits to his wife's bedroom would be frequent.[11] In another act of preservation of the royal family, Diane helped nurse Catherine back to health when she was ill.[12] Diane was in charge of the education of her and Henry's children until 1551; her daughter Françoise managed the queen's servants. While Henry and Catherine would eventually produce 10 children together, and despite the occasional affair with such as Philippa Duci, Janet Fleming, and Nicole de Savigny, Diane de Poitiers would remain Henry's lifelong companion. For the next 25 years she would be the most powerful influence in his life and the most powerful woman in France.[13] Based on allusions in their correspondence, it is generally believed that she became his mistress in 1534 when she was 35 years old and Henry was 16 years old.[14] 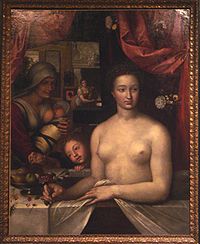 A famous painting of Diane de Poitiers in the nude by François Clouet.

Remembered as a beautiful woman, she maintained her good looks well into her 50s, and her appearance was immortalized in sculpture and paintings.[15] Only two signed paintings by François Clouet are known to exist, one being a painting of Diane. The subject of that painting shows her seated nude in her bath. She sat for other paintings of the time, often topless or nude, other times in traditional poses. In about 1549 sculptor Jean Goujon designed a statue especially for her in which she represented the goddess Diana. It features her reclining nude body together with her two dogs and a stag, and was entitled "Diana with a Stag". It is displayed in the Louvre.

When Francis I was still alive, Diane had to compete at the court with Anne de Pisseleu, the king's favourite. She had the latter exiled on her lands upon Francis I's death in 1547.

Diane possessed a sharp intellect and was so politically astute that King Henry II trusted her to write many of his official letters, and even to sign them jointly with the one name HenriDiane. Her confident maturity and loyalty to Henry II made her his most dependable ally in the court. Her position in the Court of the King was such that when Pope Paul III sent the new Queen Catherine the "Golden Rose", he did not forget to present the royal mistress Diane with a pearl necklace. Within a very short stretch of time she wielded considerable power within the realm. In 1548 she received the prestigious title of Duchess of Valentinois, then in 1553 was made Duchesse d'Étampes. The king's adoration for Diane caused a great deal of jealousy on the part of Queen Catherine, particularly when Henry entrusted Diane with the Crown Jewels of France, had the Château d'Anet remodeled for her, and gave her the Château de Chenonceau, a piece of royal property that Catherine had wanted for herself. However, as long as the king lived, the Queen was powerless to change this.

Henry's death and her downfall 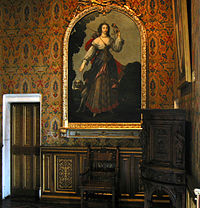 Portrait of Diane de Poitiers as Diana goddess of the hunt on display in the bedroom of Francis I at the Château de Chenonceau.

Despite wielding such power over the king, Diane's status depended on the king's welfare, and his remaining in power. In 1559, when Henry was critically wounded in a jousting tournament, Queen Catherine assumed control, restricting access to him. Although the king was alleged to have called out repeatedly for Diane, she was never summoned nor admitted, and on his death, she was also not invited to the funeral. Immediately thereafter, Diane moved to the Château de Chaumont. She stayed there only a short time, and lived out her remaining years in her chateau in Anet, Eure-et-Loir, where she lived in comfortable obscurity.[16]

At the age of 64, Diane suffered a fall during a ride.[15] Never fully recovering, she died at the age of 66.[15] In accordance with her wishes, and to provide a resting place for her, her daughter completed the funeral chapel built near the castle. During the French Revolution, her tomb was opened and her remains thrown into a mass grave.

In 1866, Georges Guiffrey published her correspondence.

When French experts dug up the remains of Diane de Poitiers in 2009, they found high levels of gold in her hair. It is suggested that the "drinkable gold" she regularly took—believed to preserve youth—may have ultimately killed her.[17][18]

In fiction and film 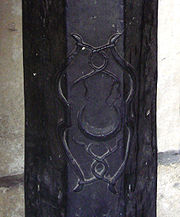 A simple crescent emblem of Diane de Poitiers on a cannon of Henri II.

Diane de Poitiers has been featured in many novels and films.