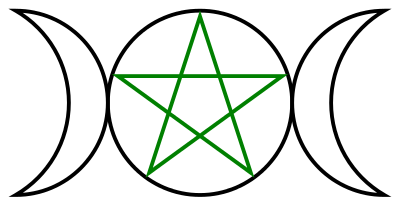 Symbol of the Goddess with the Pentacle.

Dianic Wicca, also known as Dianic Witchcraft[1] is a neopagan religion of female-centered goddess worship and religious witchcraft. While some adherents identify as Wiccan, it differs from most traditions of Wicca in that only goddesses are worshiped (whereas most Wiccan traditions honor both female and male deities).[2][3]

While there is more than one tradition that calls itself Dianic,[3] the most well known is the female-only variety,[1] founded by Zsuzsanna Budapest in the United States in the 1970s.[2][3] It is notable for its worship of a single Goddess and focus on egalitarian, matriarchal feminism.[3] It is named after the Roman goddess Diana, but Dianics worship goddesses from many cultures, seeing them as "aspects" of a monotheistic goddess.[2] Dianic Wicca is an eclectic combination of elements from British Traditional Wicca, Italian folk-magic as recorded by Charles Leland in Aradia, feminist values, folk magic and healing practices from a variety of different cultures.[2][3] 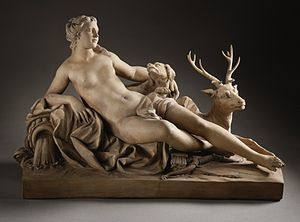 Diana (and her predecessor, the Greek goddess Artemis) as a protector of women and wild nature[4]

Dianic Wiccans of the Budapest lineage worship the Goddess, who they see as containing all goddesses, from all cultures; she is seen as the source of all living things and containing all that is within her.[2] Dianic covens practice magic in the form of mediation and visualization in addition to spell work. They focus especially on healing themselves from the wounds of the patriarchy while affirming their own womanhood.

Rituals can include reenacting religious and spiritual lore from a feminist standpoint, celebrating the female body, and mourning society's abuses of women.[5] The practice of magic is rooted in the belief that energy or 'life force' can be directed to enact change.[6] However it is important to note that rituals are often improvised to suit individual or group needs and vary from coven to coven.[7] Some Dianic Wiccans eschew manipulative spellwork and hexing because it goes against the Wiccan Rede. However, many other Dianic witches (notably Budapest) do not consider hexing or binding of those who attack women to be wrong, and actively encourage the binding of rapists.[2]

Like other Wiccans, Dianics may form covens, attend festivals, celebrate the eight major Wiccan holidays, and gather on Esbats.[2] They use many of the same altar tools, rituals, and vocabulary as other Wiccans. Dianics may also gather in less formal Circles.[8] The most noticeable difference between the two are that Dianic covens of Budapest lineage are composed entirely of women.[2][3]

When asked why "men and gods" are excluded from her rituals, Budapest stated:

It’s the natural law, as women fare so fares the world, their children, and that’s everybody. If you lift up the women you have lifted up humanity. Men have to learn to develop their own mysteries. Where is the order of Attis? Pan? Zagreus? Not only research it, but then popularize it as well as I have done. Where are the Dionysian rites? I think men are lazy in this aspect by not working this up for themselves. It’s their own task, not ours.

There is therapeutic value inherent in Dianic ritual—many women use it to overcome personal trauma and raise awareness about violence towards women, earning comparisons to feminist consciousness-raising groups in the 1960s and 70s.[9][10] In fact, some groups develop rituals specifically to confront gendered personal trauma, such as battery, rape, incest, and partner abuse. In one ethnographic study of such a ritual, women shifted their understanding of power from the hands of their abusers to themselves. It was found that this ritual had improved self-perception in participants in the short-term, and that the results could be sustained with ongoing practice.[11][12]

Dianics also pride themselves on the inclusion of lesbian and bisexual members. It is a goal within many covens to explore female sexuality and sensuality outside of male control, and many rituals function to affirm lesbian sexuality.[13] Other LGBT people find Wicca after coming out to maintain their spirituality in a sexuality-affirming religious practice.[6] However, many covens are trans-exclusionary, citing the close link between ritual and body, and reject those who were not assigned female at birth.[13] It is possible that this varies from coven to coven, as some groups also directly challenge gender identity.[10] 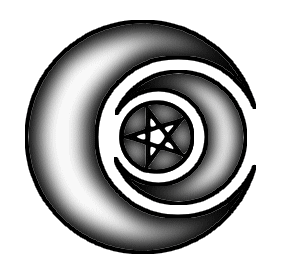 Dianic Wicca began on the Winter Solstice of 1971, when Budapest led a ceremony in Hollywood, California.[2][3] Self-identifying as a "hereditary witch,"[2][3] and claiming to have learned folk magic from her mother,[2][3] Budapest is frequently considered the mother of modern Dianic Wiccan tradition.[3] Dianic Wicca itself is named after the Roman goddess of the same name.[14]

McFarland Dianic is a Neopagan tradition of goddess worship founded by Morgan McFarland and Mark Roberts which, despite the shared name, has a different theology and in some cases accepts male participants.[3][15] McFarland largely bases their tradition on the work of Robert Graves and his book The White Goddess.[15] While some McFarland covens will initiate men, the leadership is limited to female priestesses.[15] Like other Dianic traditions, "McFarland Dianic covens espouse feminism as an all-important concept."[15] They consider the decision whether to include or exclude males as "solely the choice of [a member coven's] individual High Priestess."[15]