A melodeon or diatonic button accordion is a member of the free-reed aerophone family of musical instruments. It is a type of button accordion on which the melody-side keyboard contains one or more rows of buttons, with each row producing the notes of a single diatonic scale. The buttons on the bass-side keyboard are most commonly arranged in pairs, with one button of a pair sounding the fundamental of a chord and the other the corresponding major triad (or, sometimes, a minor triad).

Diatonic button accordions are popular in many countries, and used mainly for playing popular music and traditional folk music, and modern offshoots of these genres.

Various terms for the diatonic button accordion are used in different parts of the English-speaking world.

To simplify matters and avoid ambiguity, in the remainder of this article the term diatonic button accordion, or DBA, will be used.

The following definitions will assist understanding of this article.

Most diatonic button accordions have a "single-action" (or bisonoric) keyboard,[citation needed] meaning that each button produces two notes: one when the bellows are pressed or pushed (closed) and another when the bellows are drawn or pulled (opened). In this respect, these instruments operate like a harmonica.

(In contrast, most other types of accordion, for example piano accordions and chromatic button accordions, are "double-action" – or unisonoric – because each key produces a single note regardless of bellows direction.)

There are varieties of diatonic button accordion that are double-action, such as the garmon.

Distribution of notes on the keyboard and range

Because each button produces two notes, the diatonic scale can be covered in four buttons on a melody row.

For example, on a melody row pitched in C, the notes of the lower full octave of the instrument’s range are assigned to four buttons as follows:

Note: the first button in the example above, numbered 1, is likely to be the 3rd or 4th button in a row on an instrument.

When the bellows are pressed, every button produces a note from the major triad of the home key; in this case, the pattern CEG repeats itself throughout the keyboard. The remaining notes of the diatonic scale are produced when the bellows are drawn or pulled.

Since there are seven notes in the diatonic scale, and since each button produces two notes, the note pairings on the buttons change in each octave. In the second full octave of the instrument’s range, E is paired with D (instead of with F in the first octave), and so on.

Because the range of each row is typically restricted to two complete octaves (with a few notes above and below), the inconsistent note pairing from one octave to the next remains manageable.

On a one-row DBA, music in a single major key and its relative minor can be played. For example, an instrument in D can play music in D major and B minor. However, the variety of music that can be played on a one-row instrument is wider than these facts might suggest: besides D major and B minor, our one-row instrument in D can play tunes in A Mixolydian and E Dorian, and tunes that use gapped scales, such as pentatonic tunes with a root of D, G or A.

A one-row DBA has the advantages of being light and compact, but is by its nature limited to the notes of a single diatonic scale. Since the mid-to-late 19th century, instruments have been produced with more than one row in order to give players a greater choice of scales and tonalities.

Fourth-apart systems are the most widespread form of multi-row DBA. Moving from the outside of the keyboard towards the inside, each row is pitched one-fourth higher than its neighbour. Conventionally, the outer keyboard row is specified first: for an example, on a G/C instrument the outer row is in the key of G, the inner row in C.

Commonly used in continental Europe are two-row systems in G/C and C/F and three-row systems in G/C/F, but many other permutations exist. In England, in the latter part of the 20th century, the D/G configuration became firmly established as the standard for interpreting traditional music of Britain, and particularly for the accompaniment of social and Morris dancing.

Three-row systems are also popular in Mexico and the United States (in Conjunto, Tejano, Zydeco and Cajun musics) and Colombia (in Vallenato and Folklor musics).[6] Tunings include B♭/E♭/A♭, A/D/G, G/C/F, F/B♭/E♭ and E/A/D. The three-row fourth-apart configuration is known as the "international system."[7]

Multi-row systems obviously extend the range of tonalities available. But since many notes in the additional rows are "reversals" (duplicate notes produced by the opposite bellows action), multi-row systems allow greater flexibility of phrasing, since the player can often choose whether or not to change bellows direction, or to harmonize with a particular chord, by choosing a note from one row or another. Styles of play have developed in which row-crossing allows the bass side to be used to maximum effect, and the number of changes of bellows direction greatly reduced.

Another feature designed to increase the flexibility of fourth-apart systems is the inclusion of notes that lie beyond the diatonic scales of each row, or "accidentals". These notes are most often operated by the buttons at the top of the keyboard (that is, closest to the player’s chin), below the lowest notes of the scale.

Accidentals are sometimes placed on two extra buttons, or a shorter third row of four or more buttons, close to the bellows. The Club system developed by Hohner is a well-established example of this approach. Using the accidentals, and with the added modification of a Gleichton (unisonoric second-octave tonic in the centre of the middle row), this system allows players to obtain a fully chromatic scale – albeit in one direction only (draw).[8]

Another use of such additional short rows, or half-rows, is to provide reversals (see above) to give the player greater flexibility. 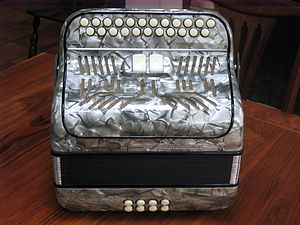 1950s two-row instrument in C♯/D by the Paolo Soprani company, of the type favoured by Irish musicians; grey celluloid finish.

In semitone-apart systems, moving in from the outside of the keyboard, each row is pitched a semitone higher than its neighbour. This configuration makes all the notes of the chromatic scale available. As a result, such instruments could strictly be termed chromatic (rather than diatonic) instruments. In practice, however, the restrictions imposed by the single action and layout of the keyboard lead most players to keep to a fairly restricted range of keys (albeit a wider range than is practical on most fourth-apart systems).

The earliest semitone-apart system was C/C♯, and many variants have been used over the years, notably D/D♯ and G/G♯. However, since the mid-20th century two main systems have been in widespread use: the B/C system, used mainly for Irish and Scottish music, along with its larger cousin, the B/C/C♯ system (which is now little used outside Scotland); and the C♯/D system, somewhat less common, used mainly in Irish music. (Irish-American musicians of the mid-20th century used this system with the position of the rows reversed, i.e. D/C♯.)

Some modern players, particularly in France, are driving a trend towards instruments with more complex bass systems, with as many as 16 or even 18 buttons. Sometimes these more elaborate systems will diverge from the single-action principle, and may feature bass notes only instead of bass-chord pairs of buttons.

The B/C/C♯ system (also known as the British Chromatic System) used in Scotland provides a notable example of the use of a double-action bass side with a single-action melody side: these instruments frequently feature a full Stradella bass system as used on piano accordions and chromatic button accordions.[9]

Geographical variations on the DBA theme

Several distinct variations of the DBA have developed in different regions of the world. These include the Russian garmon, the Steirische Harmonika[notes 1] or Slovenian-style accordion that is popular in Alpine regions of Europe, the Swiss Schwyzerörgeli and the Basque trikitixa; the last two combine single- and double-action (bisonoric and unisonoric) features. A common type of Italian organetto has a single melody row augmented with a very short half-row of between two and four buttons (often smaller in diameter than those on the main row) providing reversals only.

Advantages and disadvantages of the diatonic system

DBAs have two main advantages when compared with chromatic accordions such as piano accordions and chromatic button accordions: 1) smaller size and lighter weight, 2) and the rhythmic effects inherent in the single ("push-pull") action.

The rhythmic effects inherent in the push-pull action are very well suited to the lively rhythms of dance music, and traditional dance music in particular. (On multi-row fourth-apart instruments, players can to some extent counter the natural push-pull effect with a row-crossing playing style that "smooths out" the musical phrasing; on semitone-apart systems, depending on the key of the piece being played, players may be obliged to adopt a smoother style.)

The main disadvantage of the diatonic system is that playing in a wide range of keys is impractical. Attempts to overcome this limitation, for example by adding extra rows and more complicated bass systems, invariably add extra bulk and weight, thereby compromising an advantage in striving to overcome a disadvantage. Extreme examples are 18-bass three-row instruments of the type favoured by some French musicians, and B/C/C♯ accordions with 120-button Stradella basses: the size and weight of both these types can be greater than medium-sized piano or chromatic accordions.