Richard Benjamin "Dick" Haymes (September 13, 1918 – March 28, 1980) was an Argentine actor and singer. He was one of the most popular male vocalists of the 1940s and early 1950s. He was the older brother of Bob Haymes, an actor, television host, and songwriter.

Haymes was born in Buenos Aires, Argentina in 1918.[1][2] His mother, whom Haymes predeceased, was Irish-born Marguerite Haymes (1894–1987), a well-known vocal coach and instructor. Dick Haymes became a vocalist in a number of big bands, worked in Hollywood, on radio, and in films throughout the 1940s/1950s.

Though never achieving the immensely popular status of fellow baritone crooners like Bing Crosby, Frank Sinatra, or Perry Como, Haymes was nonetheless just as respected for his musical ability. On September 3, 1942, Sinatra introduced Haymes on radio as Sinatra's replacement in the Tommy Dorsey band.[3][4] Prior to joining Dorsey's group, Haymes sang with the Harry James orchestra.[5]

In 1945 Haymes co-starred with Jeanne Crain, Dana Andrews and Vivian Blaine in the musical State Fair. He teamed with female vocalist Helen Forrest for many hit duets during World War Two, including "Together," "I'll Buy That Dream," and "Long Ago and Far Away"; he sang with Judy Garland on two Decca recordings of songs from the film The Shocking Miss Pilgrim, in which he appeared with Betty Grable.

He paired repeatedly with the Andrews Sisters (Patty, Maxene, and LaVerne) on a dozen or so Decca collaborations, including the Billboard hit "Teresa," "Great Day," "My Sin," and a 1952 rendering of the dramatic ballad "Here in My Heart," backed by the sisters and Nelson Riddle's lush strings. His duets with Patty Andrews were also well received, both on Decca vinyl and on radio's Club Fifteen with the sisters, which he hosted in 1949 and 1950. He also joined Bing Crosby and The Andrews Sisters for 1947 session that produced the Billboard hit "There's No Business Like Show Business," as well as "Anything You Can Do (I Can Do Better)." His popular renditions of tender ballads such as "Little White Lies" and "Maybe It's Because" were recorded with celebrated arranger Gordon Jenkins and his orchestra and chorus.[6]

Haymes's birth in Argentina to non-U.S. citizens meant he was not an American citizen. In order to avoid military service during World War II, Haymes asserted his nonbelligerent status as a citizen of Argentina, which was neutral at that time. Hollywood-based columnists Louella Parsons and Hedda Hopper questioned Haymes' patriotism, but the story had little effect on his career. About that time, he was classified 4-F by the draft board because of hypertension. As part of his draft examination, he was confined for a short period to a hospital on Ellis Island, which confirmed his hypertension.[7]

In 1953, Haymes went to Hawaii (then a territory and, technically, not part of the United States) without first notifying immigration authorities. On returning to the mainland United States, he was nearly deported to Argentina, but won his battle to remain in the United States. 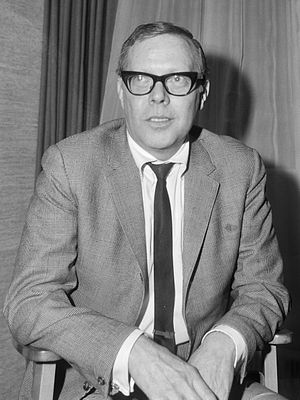 He experienced serious financial problems later in life, by the early 1960s declaring bankruptcy with $500,000 in debts.[8]

He appeared as unscrupulous doctor Elroy Gantman in a 1974 episode of the TV show Adam-12.

Haymes was married six times, including to film actresses Joanne Dru (1941–1949), Rita Hayworth (1953–1955), and Fran Jeffries (1958–1964). He was also married to Nora Eddington, a former wife of Errol Flynn. Haymes had a total of six children—three (Richard, Helen, and Barbara) with Joanne Dru, one (Stephanie) with Fran Jeffries, and two (Sean and Samantha) with his last wife, British model Wendy Smith. His daughter Stephanie was married for a time to songwriter Bernie Taupin.

Dick Haymes died from lung cancer in Los Angeles in 1980. He was 61 years old.