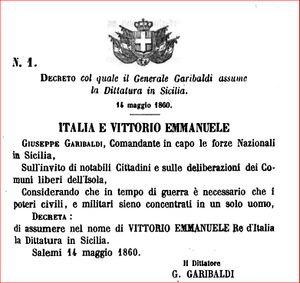 The Dictatorship of Garibaldi (or Dictatorial Government of Sicily) was the provisional executive that Giuseppe Garibaldi appointed to govern the territory of Sicily during the Expedition of the Thousand in 1860. It governed in opposition to the Bourbons of Naples.

On May 14, 1860 in Salemi, Garibaldi announced that he was assuming dictatorship over Sicily, in the name of Victor Emmanuel II of Italy. On May 17, Francesco Crispi was appointed First Secretary of State.[1]

The Redshirts advanced to Palermo, the capital of the island, and launched a siege on 27 May. On June 2, 1860 in Palermo were appointed four secretaries of State and created six departments.

Was created the Sicilian Army and a fleet of the Dictatorship Government of Sicily.[2]

The pace of Garibaldi's victories had worried Cavour, who in early July sent him a proposal of immediate annexation of Sicily to Piedmont. Garibaldi, however, refused vehemently to allow such a move until the end of the war. Cavour's envoy, Giuseppe La Farina, was arrested and expelled from the island. He was replaced by the more malleable Agostino Depretis, who gained Garibaldi's trust and was appointed as pro-dictator.[3]

The dictatorial government ended October 21, 1860, when the annexation of the Kingdom of Italy was ratified by a popular plebiscite.