Dictionary of Greek and Roman Biography and Mythology 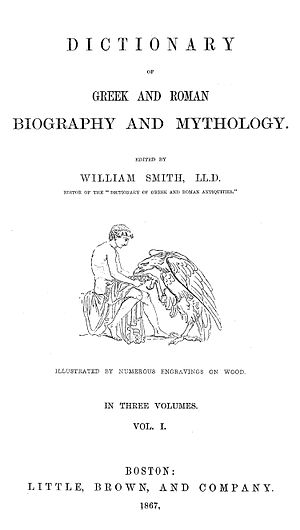 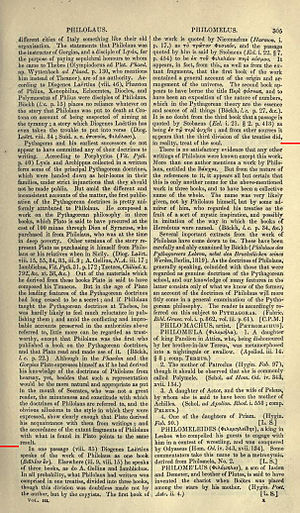 The work lists thirty-five authors in addition to the editor, who is also an author for some definitions and articles. The authors were classical scholars, primarily from Oxford, Cambridge, the Rugby School, and the University of Bonn, but some were from other institutions. Many of the mythological entries were the work of the German expatriate Leonhard Schmitz, who helped to popularise German classical scholarship in Britain.[2]

With respect to biographies, Smith intended to be comprehensive. In the preface, he writes:

Samuel Sharpe thought Edward Bunbury had plagiarised his work: "I certainly felt mortified on reading the articles on the Ptolemies in Dr. Smith's " Dictionary of Classical Biography." They were all written by E. H. Bunbury with the help of my " History of Egypt," and with-out any acknowledgment, though he even borrowed the volume from my brother Dan for the purpose." (Diary entry 3 September 1850.) [3]

Many of the Dictionary's definitions and articles have been referred to in more recent works, and Robert Graves has been accused of "lifting his impressive-looking source references straight, and unchecked" from it when writing The Greek Myths.[2]

It appears, in fact, from this, as well as from the extant fragments, that the first book (from Philolaus) of the work contained a general account of the origin and arrangement of the universe. The second book appears to have been an exposition of the nature of numbers, which in the Pythagorean theory are the essence and source of all things. (p. 305)

Use and availability today

The work is now in the public domain, and is available in several places on the Internet. While still largely accurate (only rarely have ancient texts been emended so severely as to warrant a biographical change), much is missing, especially more recent discoveries (like Aristotle's Constitution of the Athenians, or the decipherment of Linear B) and epigraphic material. Perhaps more seriously, the context in which ancient evidence is viewed has often changed in the intervening century and a half.

Also the Internet Archive has a derivative work: