Pironi was born in Villecresnes, Val-de-Marne. He began studying as an engineer and earned a degree in science, but entering the family construction business fell by the wayside following his enrollment at the Paul Ricard driving school.

He was awarded Pilot Elf sponsorship in 1972, a program designed to promote young French motorsport talent, that also led Patrick Tambay and Alain Prost to Formula One. After becoming Formula Renault champion in France in 1974, taking the Super Renault championship title in 1976 and winning the prestigious Monaco Grand Prix Formula Three support race in 1977, Pironi made his F1 debut at the Argentine GP on 15 January 1978. This was with Ken Tyrrell's team which, despite being British, had a strong working relationship with Elf, dating back to the late 1960s. In the same year, Pironi was part of the massive Renault squad tasked with winning the 24 Hours of Le Mans. Partnering Jean-Pierre Jaussaud in the team's second car, the unusual "bubble roof" A442B, he won the race by four laps from the rival Porsche 936s. 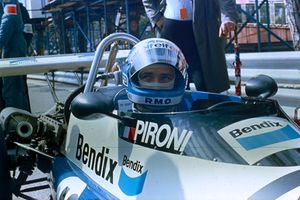 Pironi as a Formula Two driver in 1977

Two seasons with the underfinanced Tyrrell team demonstrated enough promise for Guy Ligier to sign Pironi to his eponymous French team in 1980, a season in which Pironi recorded his first victory, in the Belgian Grand Prix at Zolder, as well as several podium finishes. Pironi's performance piqued Enzo Ferrari's interest in the Frenchman's services, which he secured for 1981. Ferrari later recalled, "As soon as Pironi arrived at Maranello, he won everyone's admiration and affection, not only for his gifts as an athlete, but also for his way of doing things - he was reserved while at the same time outgoing."[1]

Teamed and compared with Gilles Villeneuve, who welcomed the Frenchman and treated him as an equal, Pironi was slower in qualifying but steadier in races during his first season with Ferrari. Establishing a fine rapport with the senior members of the team, Pironi arguably exploited this good relationship in the aftermath of the controversial 1982 San Marino race, where Pironi is widely thought to have duped Villeneuve into conceding victory by giving the impression that he would finish behind his team-mate, only to unexpectedly power past him into the Tosa hairpin, despite the team has signaled both drivers to slow down. Villeneuve was furious with Pironi and vowed never to say another word to him. The Canadian was killed in qualifying two weeks later at the following Belgian Grand Prix at Zolder trying to better Pironi's lap time, and Villeneuve's state of mind is often considered a contributory cause to his fatal accident.

Harvey Postlethwaite (the co-designer of the 126C2) believed that the "drama" following San Marino was blown out of proportion by the press, "Villeneuve was really upset because he felt he should have been handed the race on a plate....They were competitive and either of them could win."[2]

He also mentioned a technical reason as to why the two Ferraris were swapping places so often during the San Marino race. "The (Ferrari 126C) turbo pressure was very, very difficult to control. Most of the reason that they were able to pass one another so evenly was that one would go through a sticky patch and sort of only be giving 4-bar of boost or 4.2, and the other would be getting a burst of 4.5, so it would have the legs of the other guy. It wasn't quite as spectacular as it appeared at the time."[3]

Ferrari's chief mechanic Paolo Scaramelli confirmed that the team had fixed, before the race, that, if Renaults were off, the driver who was leading should not be attacked by the teammate, to prevent chances of a dispute between both Gilles and Pironi.[4]

Pironi did say a deal took place but the terms were more complex, "We had a meeting before the race; Arnoux, Prost, Gilles and me, in my motorhome. We agreed to make a spectacle for the first half of the race so long as our positions on the lap after half-distance were the same as on the grid. We started the real race at half-distance and so had plenty of fuel. The team (Ferrari) didn't know that, Marco Piccinini and Gerard Larrousse (Renault F1's team manager) didn't know, only the mechanics knew, but Prost and Arnoux -- they will tell you the same." [5]

Pironi went on to add, "When I passed Villeneuve the first time, this was because he had made a mistake and had gone off the circuit. The first slow sign we got was a few laps after that, and by then we knew we had a lot of fuel left because of the way we drove the first half of the race." [5]

In a 2002 interview with Motor Sport, Marco Piccinini supports Pironi's view, "It was a genuine misunderstanding triggered by Gilles making a mistake. He went off the circuit slightly and Didier passed. The sign was hung out because we were 1-2, not because we favored one driver over the other. We didn't favor either because it was at an early stage of the championship. We just wanted to maintain 1-2." [6]

In 2007, former Marlboro marketing executive John Hogan (whose company sponsored Pironi in his time as a Ferrari driver) disputed the claim that Pironi had gone back on a prior arrangement with Villeneuve. He said: "I think Gilles was stunned somebody had out-driven him and that it just caught him so much by surprise."[7]

With a fast, reliable car, Pironi appeared to be on course for being 1982 World Champion, but the Frenchman's own state of mind underwent severe stress due to several factors. Widespread antipathy by many in the F1 fraternity was directed toward him in the wake of the Zolder tragedy. There was also the rapid breakdown of his marriage to longtime girlfriend Catherine Beynie within weeks of the ceremony taking place. He observed first hand the death of Riccardo Paletti in the 1982 Canadian Grand Prix, the young Italian ploughing into Pironi's stalled Ferrari on the starting grid. These tragic events may have resulted in Pironi being in a dour, gloomy mood that was misinterpreted at the time as over-confidence and arrogance.

Ferrari team members are reported to have observed changes in Pironi's behaviour throughout that summer. (Pironi remarked before the 1982 British Grand Prix, "I feel I am beginning to touch the World Championship.")[8]

Racing journalists at the circuit were quick to say Pironi was driving "like a mad man." In defense of Pironi, Forghieri said the substantial differences in the lap times between the two sets of Goodyears were no surprise to the team.[9] The weather conditions at Hockenheim that weekend were highly uncertain: quickly alternating back and forth between wet and dry.

In the rain, one of the many problems caused by "ground effect" F1 cars was that the spray was forced out from under the side pods as a fine mist and virtually created a fog. To those behind, this made cars in front close to invisible.[10]

When Pironi tried passing Derek Daly's Williams, the Ferrari 126C2 smashed into the back of Alain Prost's unsighted Renault, triggering a violent accident which bore some similarity to that suffered by Villeneuve. Pironi survived, but multiple fractures to both of his legs meant he never raced again in Formula 1. In the immediate aftermath of the accident, he said he felt no pain. "It was just like my accidents before, when I had no injuries. All I could think about was the car, that the spare one didn't work as well as this one, and that I would have to use it (the spare) for the race. Then I saw my legs and I thought maybe I wouldn't be doing this race, after all. In the helicopter, they began to hurt very seriously. But if I was to have this accident, it was lucky for me that it was in Germany and not in a more primitive place."[11] The extent of Pironi's leg fractures was severe, however contrary to Pironi's account of the accident,[12] medics under the guidance of Professor Sid Watkins did not consider amputation in order to extricate him from the car.[13]

At this point, he was leading with 39 points in the championship, ahead of Watson (30) and Rosberg (27), but Pironi was relegated to runner-up as Rosberg passed him to become World Champion with 44 points.

In 1986, after he was able to walk with both legs unaided, it looked as if Pironi would make a comeback when he tested for the French AGS team at Circuit Paul Ricard and subsequently, the Ligier JS27 at Dijon-Prenois. He proved that he was still fast enough to be competitive, but coming back to F1 was not truly practical.

His insurance policy had paid out a lot of money based on the fact that Pironi's legs were injured so badly that he could never return to F1. Had he returned, he would have been legally obliged to pay all the money back.[14]

Pironi decided to turn to offshore powerboat racing instead. On 23 August 1987, Pironi was killed in an accident in the Needles Trophy Race near the Isle of Wight, that also took the life of his two crew members: journalist Bernard Giroux and his old friend Jean-Claude Guenard. Their boat, "Colibri 4," rode over a rough wave caused by an oil tanker, causing the boat to flip over.[15]

After Pironi's death, his girlfriend Catherine Goux gave birth to twins. In honour of Pironi and Gilles Villeneuve, who were good friends before the Imola controversy, she named them Didier and Gilles. [16]