From Infogalactic: the planetary knowledge core
Jump to: navigation, search
Not to be confused with Diego (Giacomo in Italian), the youngest brother of Christopher Columbus[1].

He was born in Portugal, either in Porto Santo in 1479/1480, or in Lisbon in 1474. He spent most of his adult life trying to regain the titles and privileges granted to his father for his explorations and then denied him in 1500. He was greatly aided in this goal by his marriage to María de Toledo y Rojas, niece of the 2nd Duke of Alba, who was the cousin of King Ferdinand. 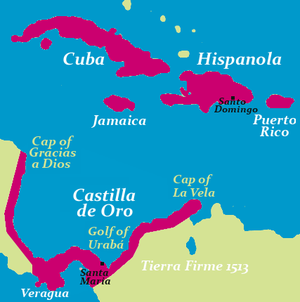 Diego was made a page at the Spanish court in 1492, the year his father embarked on his first voyage. Diego had a younger half-brother, Fernando, by Beatriz Enriquez de Arana. 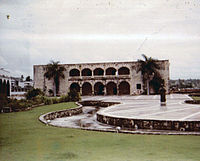 In 1509, he was named Governor of the Indies, the post his father had held. He established his home (El Alcázar de Colón), which still stands, in Santo Domingo in what is now the Dominican Republic. He was made Viceroy of the Indies in May 1511, remaining in charge until 1518. He continued to fight encroachments on his power and for the remainder of his father's privileges and titles. He also made trips to Spain in 1515 and 1523 to plead his case, without success. After his death, a compromise was reached in 1536 in which his son Luis Colón de Toledo was named Admiral of the Indies and renounced all other rights for a perpetual annuity of 10,000 ducats, the island of Jamaica as a fief, an estate of 25 square leagues on the Isthmus of Panama, then called Veragua, and the titles of Duke of Veragua and Marquess of Jamaica.

The first major slave revolt in the Americas occurred in Santo Domingo during 1522, when enslaved Muslims of the Wolof nation led an uprising in the sugar plantation of admiral Don Diego Colon. Many of these insurgents managed to escape to the mountains where they formed independent maroon communities among the Tainos.

After Columbus' death on February 23, 1526 in Spain, the rents, offices and titles in the New World went into dispute by his descendants.

Initially planned to marry Mencia de Guzman, daughter of the Duke of Medina Sidonia[3] but was forced by King Fernando to marry the king's cousin María de Toledo y Rojas (c. 1490 – May 11, 1549), who secured the transportation and burial of her father–in–law, Christopher Columbus, in Santo Domingo. She was the daughter of Fernando Alvarez de Toledo, 1st Lord of Villoria, son of García Álvarez de Toledo, 1st Duke of Alba, and his first wife María de Rojas, and had:[4]