Diego de Landa Calderón (12 November 1524 – 29 April 1579) was a Spanish bishop of the Roman Catholic Archdiocese of Yucatán.[1] He left future generations with a mixed legacy in his writings, which contain much valuable information on pre-Columbian Maya civilization, and his actions which destroyed much of that civilization's history, literature, and traditions. He is a major figure in the so-called "Black Legend".

The conversion of the Maya

Born in Cifuentes, Guadalajara, Spain, he became a Franciscan monk in 1541, and was sent as one of the first Franciscans to the Yucatán, arriving in 1549. Landa was in charge of bringing the Roman Catholic faith to the Maya peoples after the Spanish conquest of Yucatán. He presided over a spiritual monopoly granted to the Catholic order of Franciscans by the Spanish crown, and worked diligently to buttress the order's power while converting the indigenous Maya. His initial appointment was to the mission of San Antonio in Izamal, which served also as his primary residence while in Yucatán.

He is the author of the Relación de las cosas de Yucatán in which he catalogues the Maya religion, Maya language, culture and writing system. This manuscript was written around 1566 on his return to Spain; however, the original copies have long since been lost. The account is known to us only as an abridgement, which in turn had undergone several iterations by various copyists. The extant version was produced around 1660, and was discovered by the 19th-century French cleric Charles Etienne Brasseur de Bourbourg in 1862. Brasseur de Bourbourg published the manuscript two years later in a bilingual French-Spanish edition, entitled Relation des choses de Yucatán de Diego de Landa.

Suppression of the Maya

After hearing of Roman Catholic Maya who continued to practice idol worship, he ordered an Inquisition in Mani ending with a ceremony called auto de fé. During the ceremony on July 12, 1562, a disputed number of Maya codices (according to Landa, 27 books) and approximately 5,000 Maya cult images were burned. The actions of Landa passed into the Black Legend of the Spanish in the Americas.

Only three pre-Columbian books of Maya hieroglyphics (also known as a codex) and, perhaps, fragments of a fourth are known to have survived. Collectively, these works are known as the Maya codices. 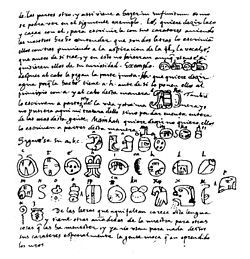 Image of the page from Relación de las Cosas de Yucatán, in which de Landa describes his Maya alphabet, which was to prove instrumental in the mid-20th-century breakthrough in Maya hieroglyphics decipherment.

Landa's Inquisition showered a level of physical abuse upon the indigenous Maya that many viewed as excessive, and was at the very least unusual. Scores of Maya nobles were jailed pending interrogation, and large numbers of Maya nobles and commoners were subjected to examination under "hoisting".[2] During hoisting, a victim's hands were bound and looped over an extended line that was then raised until the victim's entire body was suspended in the air. Often, stone weights were added to the ankles or lashes applied to the back during interrogation.

Some contemporary observers were troubled by this widespread use of torture. Crown fiat had earlier exempted indigenous peoples from the authority of the Inquisition, on the grounds that their understanding of Christianity was "too childish"[citation needed] to be held culpable for heresies. Additionally, Landa dispensed with much of the extensive formal procedure and documentation that accompanied Spanish torture and interrogation.

Scholars have argued Mexican inquisitions showed little concern to eradicate magic or convict individuals for heterodox beliefs,[3] and that witchcraft was treated more as a religious problem capable of being resolved through confession and absolution. Diego de Landa, however, perhaps inspired by intolerant fellow Franciscan Cardenal Cisneros, from the same Toledo convent, was “monomaniacal in his fervor”[4] against it. Landa believed a huge underground network of apostasies,[5] led by displaced indigenous priests, were jealous of the power the Church enjoyed and sought to reclaim it for themselves. These apostates, Landa surmised, had launched a counteroffensive against the Church and he believed it was his duty to expose the evil before it could revert the population to their old heathen ways.

Landa claims he had discovered evidence of human sacrifice and other idolatrous practices while rooting out native idolatry. Although one of the alleged victims of said sacrifices, Mani Encomendero Dasbatés, was later found to be alive and Landa’s enemies contested his right to run an inquisition,[6] Landa insisted the Papal Bull Exponi nobis justified his actions.[5]

Lopez de Cogolludo, Landa’s chief Franciscan biographer, wrote of Landa’s first hand experiences with human sacrifices. When Landa first came to the Yucatán, he made it his mission to walk the breadth of the peninsula and preach to the most remote villages.[7] While passing through Cupules, he came upon a group numbering 300 that was about to sacrifice a young boy. Enraged, Landa stormed through the crowd, released the boy, smashed the idols and began preaching with such zeal and sincerity that they begged him to remain in the land and teach them more.

Landa was remarkable in that he was willing to go where no others would. He entered lands only recently conquered where native resentment of Spaniards was still very intense. Armed with nothing but the conviction to learn as much of native culture as he could, so that it would be easier for him to destroy it in the future,[8] Landa formulated an intimate contact with natives. Natives placed him in such an esteemed position they were willing to show him some of their sacred writings that had been transcribed on deerskin books.[9] To Landa and the other Franciscan friars, the very existence of these Mayan codices was proof of diabolical practices. In references to these books, Landa has said:

We found a large number of books in these characters and, as they contained nothing in which were not to be seen as superstition and lies of the devil, we burned them all, which they (the Maya) regretted to an amazing degree, and which caused them much affliction.[10]

Landa’s insistence of widespread cults throughout the Yucatán is backed by ample evidence. Rituals the Spanish conquerors could not understand were labeled as idolatry, superstition or even devil worship. One such ritual involved clay idols that were used in a strange combination of Catholicism and indigenous religion.[10] During these ceremonies, individuals would be crucified, then have their hearts removed from their chest and their blood smeared onto the idols. Such ceremonies were practiced throughout the Yucatán up to 45 years after the arrival of the Spaniards.

Landa himself was never in doubt of the necessity of his inquisition. Whether magic and idolatry were being practiced or not, there can be little doubt Landa was “possessed” by fantasies of demonic power in a new land.[11] Landa, like most Franciscans of the time, subscribed to millenarian ideas,[12] which demanded the mass conversion of as many souls as possible before the turn of the century. Eliminating evil and pagan practices, Landa believed, would usher the Second Coming of Christ that much sooner.

Many historians believe there can be little doubt old traditions would continue even during Spanish rule, and because of “the resilience of the old social order, and the determination of its custodians to sustain the old ways, some human killings persisted into the post-conquest period...[13]” While it was likely that Landa did coerce exaggerated confessions through the use of torture, he believed so fully that human sacrifice was occurring around him that he was willing to murder a handful of sinners to save overall community.[14]

Landa’s Relación De Las Cosas De Yucatán is about as complete a treatment of Mayan religion as we are likely to ever have.[15] While controversy surrounds Landa’s use of force in the conversion process, few scholars would debate the general accuracy of his recordings. Allen Wells calls his work an “ethnographic masterpiece”,[16] while William J. Folan, Laraine A. Fletcher and Ellen R. Kintz have written that Landa‘s account of Maya social organization and towns before conquest is a “gem.[17]” Landa’s writings are our main contemporary source for Mayan history,[15] without which our collective knowledge of Mayan ethnology would be devastatingly small.[18] While Landa might have exaggerated some claims to justify his actions to his accusers, his intimate contact with natives and all around accuracy in other fields heavily implies his version of events has at least some truth in it.

Landa was sent back to Spain by Bishop Toral, to stand trial for conducting an illegal Inquisition. His actions were strongly condemned before the Council of the Indies. This resulted in a "committee of doctors" being commissioned to investigate Landa's alleged crimes. In 1569 the committee absolved Landa of his crimes. Bishop Toral died in Mexico in 1571, allowing King Philip II of Spain to appoint Landa as the second bishop of Yucatán.

Landa's Relación de las cosas de Yucatán also created a valuable record of the Mayan writing system, which despite its inaccuracies was later to prove instrumental in the decipherment of the writing system. Landa asked his informants (his primary sources were two Maya individuals descended from a ruling Maya dynasty, literate in the script) to write down the glyphic symbols corresponding to each of the letters of the (Spanish) alphabet, in the belief that there ought to be a one-to-one correspondence between them. The results were faithfully reproduced by Landa in his later account, although he recognised that the set contained apparent inconsistencies and duplicates, which he was unable to explain. Later researchers reviewing this material also formed the view that the "de Landa alphabet" was inaccurate or fanciful, and many subsequent attempts to use this transcription remained unconvincing. It was not until much later, in the mid-20th century, when it was realised and then confirmed that it was not a transcription of an alphabet, as Landa and others had originally supposed, but was rather a syllabary. Confirmation of this was only to be established by the work of Russian linguist Yuri Knorozov in the 1950s, and the succeeding generation of Mayanists.