From Infogalactic: the planetary knowledge core
Jump to: navigation, search
For other uses, see Dieppe (disambiguation).

Dieppe (French pronunciation: ​[djɛp]) is a coastal community in the Arrondissement of Dieppe in the Seine-Maritime department in the Normandy region of northern France. The population stood at 34,670 in 2006.

A port on the English Channel, at the mouth of the Arques river, famous for its scallops, and with a regular ferry service to Newhaven in England, Dieppe also has a popular pebbled beach, a 15th-century castle and the churches of Saint-Jacques and Saint-Remi. The mouth of the Scie river lies in the Canton of Dieppe-Ouest at Hautot-sur-Mer.

The inhabitants of the town of Dieppe are called Dieppois (m) and Dieppoise (f) in French.[1]

Dieppe belongs to the Pays de Caux, lying along the Alabaster Coast in the region of Upper Normandy. It is located on the Channel coast, north of Rouen at the mouth of the Arques river and lies east of the mouth of the river Scie.

From Dutch diep > deep, or Old English deop or Old Norse djupr, same meaning. The same adjective can be recognized in other place-names like Dieppedalle (f. e. Saint-Vaast-Dieppedalle) and Dipdal in Normandy, which is the same as Deepdale in Great Britain.

The stream running through Dieppe was called Tella in Merovingian and Carolingian documents, before being called Dieppe in the 10th century. The name has stuck to the town, although the name of the stream changed again, to Béthune.[6]

First recorded as a small fishing settlement in 1030, Dieppe was an important prize fought over during the Hundred Years' War. Dieppe housed the most advanced French school of cartography in the 16th century. Two of France's best navigators, Michel le Vasseur and his brother Thomas le Vasseur, lived in Dieppe when they were recruited to join the expedition of René Goulaine de Laudonnière which departed Le Havre for Florida on April 20, 1564. The expedition resulted in the construction of Fort Caroline, the first French colony in the New World.[7] Another expedition two years before where Goulaine de Laudonnière was under command of Jean Ribault, a local Huguenot captain, had resulted in the foundation of Charlesfort, now in South Carolina. Dieppe was the premier port of the kingdom in the 17th century. On July 23, 1632, 300 colonists heading to New France departed from Dieppe. At the Revocation of the Edict of Nantes in 1685, Dieppe lost 3,000 of its Huguenot citizens, who fled abroad.

Dieppe was an important target in wartime; the town was largely destroyed by an Anglo-Dutch naval bombardment in 1694. It was rebuilt after 1696 in a typical French classical style by Ventabren, an architect, who gave it its unique feature for a sea port. It was popularised as a seaside resort following the 1824 visit of the widowed Duchess of Berry, daughter-in-law of Charles X. She encouraged the building of the recently renovated municipal theatre, the Petit-Théâtre (1825), associated particularly with Camille Saint-Saëns.

During the later 19th century, Dieppe became popular with English artists as a beach resort. Prominent literary figures such as Arthur Symons loved to keep up with the latest fads of avant-garde France here, and during "the season" sometimes stayed for weeks on end.

Dieppe was occupied by German naval and army forces after the fall of France in 1940. In order to allow a better defence of the coast against a possible Allied landing, the Germans destroyed the mauresque casino that was located near the beach area. The destruction of the casino had only begun at the time of the Dieppe Raid.

The Dieppe Raid in the Second World War was a costly battle for the Allies. On August 19, 1942, Allied soldiers, mainly drawn from the 2nd Canadian Infantry Division, landed at Dieppe in the hope of occupying the town for a short time, gaining intelligence and drawing the Luftwaffe into open battle. The Allies suffered more than 1,400 deaths; 1,946 Canadian soldiers were captured—more prisoners than the army lost in the 11 months of the 1944–45 NW Europe campaign.[8] However, no major objectives on the ground were achieved; in the air, a major objective of drawing German air forces into open battle was realized.

French soldiers from the region, captured in the fighting of 1940, were returned to the area after the Dieppe Raid as repayment by the German occupation authorities, who felt that the conduct of the French civilians in Dieppe had been correct and had not hindered the defence of the port during the battle.

The port remained garrisoned by German forces until the conclusion of the Battle of Normandy. When the 1st Canadian Army approached at the end of August, the garrison withdrew, not desiring to enter into battle for the port.

Dieppe was liberated on September 1, 1944, by soldiers from the 2nd Canadian Infantry Division. On September 3, the entire division paused for reorganization, and a victory parade was held; contingents representing all major units of the 2nd Division marched 10 abreast behind the massed pipes and drums of the division's highland regiments. A memorial service was held in the nearby Canadian military cemetery to honour those killed in the Dieppe Raid.[9]

Dieppe, a city in New Brunswick, Canada, received its present name in 1946, in honour of the commemoration of the 913 Canadian soldiers killed in the Dieppe Raid. The majority of its inhabitants are of Acadian descent.[10] 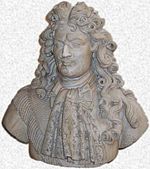 The castle, Château de Dieppe, which survived the 1694 bombardment, is now a museum and exhibition space, with a strong maritime collection. A rich collection of 17th- and 18th-century ivory carvings, including lacy folding fans, for which Dieppe was known, and the furnishings and papers of Camille Saint-Saëns. The castle's interior courtyard is picturesque.

At the Square du Canada, near the castle in a park at the western end of the Esplanade, there is a monument erected by the town commemorating the long relationship between Dieppe and Canada. The events recorded begin with the early 16th century, and culminate with the Dieppe Raid and the liberation of Dieppe by Canadians on September 1, 1944. The base of the monument is inscribed with the words "nous nous souvenons" ("we remember"). Above the monument, the Canadian Maple Leaf flag is flown side-by-side with that of France.

Some of the Canadian soldiers who were killed are buried in the Dieppe Canadian War Cemetery, in the commune of Saint-Aubin-sur-Scie south-west of Dieppe.

The town has a railway station, operated by SNCF, with frequent departure for Rouen-Rive-Droite and Paris-Saint-Lazare. SNCF operates also buses to Gisors-Embranchement through Serqueux.

Dieppe has a ferry port with direct services to the English town of Newhaven, situated at the mouth of the river Ouse in East Sussex. The twice-daily service to the Port of Newhaven is operated by DFDS Seaways, under a concession subsidised by the French government. Services are normally operated using the MS Côte D'Albâtre.[11]

Dieppe is twinned with