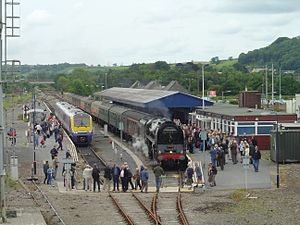 Dieselisation or dieselization is a term generally used for the increasingly common use of diesel fuel in vehicles, as opposed to gasoline or steam engines.

The two-stroke marine diesel engine was introduced in 1922 and remains in use today. It is the most efficient prime mover, with models over 100,000 horsepower and a thermal efficiency of 50%.[1] The market share of steam ships peaked around 1925 (a few sailing ships remained) and by the early 1950s diesel ships held over 50% of the market.[2]

The replacement of either steam or diesel haulage with electric locomotives is known as electrification. Whereas the benefit of replacing steam traction is indisputable, there is some dispute as to whether it is best replaced by dieselisation or electrification. Electrification has a high initial capital cost but the operating costs are lower. The overall savings depend on the effect of the investment cost compared with the savings due to lower operational and maintenance costs and the influence of better acceleration and tractive effort on railroad throughput. These are obviously different for e.g. urban networks and very long-distance networks with low frequencies. However, many railway commentators are increasingly suggesting that the ability of railways to operate with electricity not produced from fossil fuels may offer a decisive advantage over diesel power. In some countries, such as Switzerland, Sweden and Japan, electrification ended the use of steam power.[citation needed]

Advantages of diesel in rail transport

Dieselisation took place largely because of the reduction in operating costs it allowed. Steam locomotives require large pools of labour to clean, load, maintain and run. They also require extensive service, coaling and watering facilities. Diesel locomotives require significantly less time and labour to operate and maintain.[citation needed] Initially, diesel locomotives were less powerful than the largest steam locomotives, limiting train sizes or speeds, although the gap was closed somewhat by the introduction of larger diesel-electric locomotives such as the Deltic class. Electric locomotives can be vastly more powerful than either steam or diesel ones.

The small initial market for diesels was created by the New York's Kaufman Act of 1923, which prohibited operating steam locomotives in New York City and adjacent towns. Mainline passenger railroads had already been electrified, or their electrification had been planned regardless of Kaufman Act. Electrification of numerous freight yards was uneconomical, and railroads turned to diesels. The first ALCO boxcab was put in operation in 1925 by Central Railroad of New Jersey at its 138th Street[3] waterfront terminal in The Bronx.[4] The second was delivered in the same year to Baltimore and Ohio Railroad's yards on Manhattan. Both worked into the late 1950s and survive in museums to date.[5]

In North America, railroads looked to cut costs in the face of stiff competition from trucks, planes and automobiles. Railroads in America at this time also had an image problem, viewed as archaic, a fact that was re-enforced in the war when retired equipment was pressed into service. This left a lasting impression on millions of servicemen who were delayed for days in often obsolete, uncomfortable cars in obscure locations. Locomotive size also became an issue, as steam engines became so big in the 1940s that the cylinder and boiler dimensions were pushing the limits that the loading gauge would allow. Fireboxes became so big that firing a steam locomotive became an extremely difficult job without the aid of mechanical stokers.[citation needed] Mechanical stokers for feeding coal to locomotives were in use in the 1920s.[6]

Diesels slowly gained the advantage. Weighing against the cost of, and inertia against, replacing the large investment that railroads had in existing steam power was the dramatic increase in efficiency of the diesel: The diesel locomotive can be operated by a single person, with no need of a fireman to shovel coal. Also, diesels use much less fuel and no manpower when idling, something locomotives often do. Diesels can be parked running for days unattended, whereas steam engines must be constantly tended to if not completely shut down. Bringing a steam engine boiler up to operating temperature is often regarded as both an art and science, requiring much training and experience. A diesel starts and shuts down just like an automobile. Diesels pro-rate their fuel usage to the length of trains, which a steam engine cannot do. General Motors signed proprietary contracts with the major railroads, who were replacing their worn out wartime equipment, with diesels. With the GM contracts came articles that GM would supply training, facilities and maintenance, while the railroads would scrap their steam engines and remove them from competition. Due to the modern advantages of diesel locomotives, railroads in North America had retired 90% of their steam locomotives by the mid 1950s."[7][8][9] Also, major cities and their railyards became unhappy neighbors in post-war America. People were no longer content to endure the mammoth amounts of soot and smoke that coal burning steam engines produced. Early diesels, while dirty by today's standards, were a gigantic improvement in air pollution over steam.

Steam engines lasted well into the late 1950s on major American railroads, and in isolated cases into the middle 1960s on small common carrier roads, primarily for yard duties such as switching. The last steam locomotive fleet in everyday use (i.e. not a restored fleet) was retired in the late 1970s. Now they are only found in historical and sightseeing roles, where the steam engine is once again the star of the show. Retired steam engines, many of which were quite new when made obsolete, often did find a second life in developing nations due to their cheap labor for maintenance and crewing, ready supplies of coal, and lack of environmental concern.[citation needed]

As the rail lines in Europe are primarily designed for moving passenger (as opposed to freight) the trend in Europe was to replace steam traction in the main lines with electric traction, with the exceptions of the United Kingdom, Ireland and Albania. Diesels were used as an interim solution during electrification and as a permanent solution for secondary lines with less traffic and as switchers. Electrification is nowadays widespread in Europe. As of 2015, the railways in Albania and Ireland (with the exception of the electrified Dublin Area Rapid Transit) remain entirely diesel operated. Even in sparsely populated large countries (Finland, Sweden) electrification has proven to be more economical than diesels.[citation needed] Some countries, most notably Switzerland have electrified their whole network.

The majority of Japan's rail network had been electrified in the post-war years. In spite of this, more desolate railway lines, particularly on the northern island of Hokkaido continued to use surplus steam locomotives well into the mid-1970s. This was due to the limits and problems created by the then-nationalized rail network, Japanese National Railways (JNR). Japan also has large coal deposits as a natural resource. By 1970, most, if not all steam locomotives had been relegated to freight work, and by the time that complete dieselisation occurred, the remaining steam locomotives were used for branch line work and shunting duties.[citation needed]

Two tourist lines, the Darjeeling Himalayan railway and the Nilgiri mountain railway have retained steam service along with diesel.[citation needed]

The Great Western Railway introduced diesel railcars in the 1930s, but the first British mainline diesel locomotive was built by the LMS in 1947. Nationalisation of the railways took place in 1948; diesel locomotives were first introduced on a wide scale following the Modernisation Plan of 1955. The last steam locomotive for British Rail was built in 1960 and named "Evening Star" (number 92220). Steam traction was withdrawn on British Rail in 1968 and largely replaced with diesel traction (with electrification on a minority of lines). Steam was finally eliminated on Northern Ireland Railways in 1970 and entirely replaced with diesel.

This list is a sample of some of the more prominent railroad companies' diesel traction conversions.

In terms of road transport, diesel gained popularity first with commercial hauliers, throughout the later 20th century, and then with passenger car users, particularly from the 1970s onwards, once diesel engines became more refined and also more readily available in passenger cars. Diesel had by this point long been a popular choice for taxi operators and agricultural users.

In Europe as a whole, Peugeot and Mercedes-Benz in particular developed reputations for passenger-car diesel engines, whilst VM Motori developed some significant motors for four-wheel drive vehicles.[citation needed]

In London the famed "Hackney Carriage" taxi has long since been powered by a diesel engine. The high reliability, ease of driveability and excellent fuel efficiency of such an engine allows the taxis to carry many people for a lower cost than might otherwise be incurred through the use of conventional petrol engines. The traditional disadvantage of diesels in traffic is not an issue here as Hackney carriage drivers must have first gained "The Knowledge"; a detailed knowledge of all roads and shortcuts in Greater London which means that do not have to sit in 'stop-start' traffic as with most other road users.[citation needed]