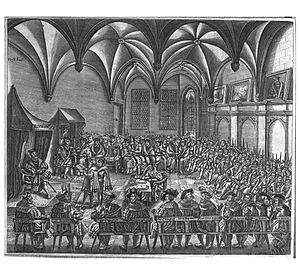 Reading of the Augsburg Confession by Emperor Charles V at the Diet of Augsburg, 1530

The Diet of Augsburg were the meetings of the Imperial Diet of the Holy Roman Empire in the German city of Augsburg. There were many such sessions, but the three meetings during the Reformation and the ensuing religious wars between the Roman Catholic emperor Charles V and the Protestant Schmalkaldic League in the early 16th century are especially noteworthy.

The session of 1530 attempted to calm rising tensions over Protestantism, especially due to fears of the rising Ottoman threat; the Ottomans under Suleiman had almost taken Vienna in 1529 and Charles V wanted Christianity to unite against this force. After the Edict of Worms had condemned Lutheranism, problems of enforcement emerged during the 1520s, as Charles V's wars against France and commitments in the rest of his empire prevented him from focusing on German religious problems. In 1529, however, he signed a successful peace treaty with France. After these successes, Charles aimed to assert his control over what he saw as German religious heresies.[1][page needed] It brought forth the Augsburg Confession, a central document of Lutheranism that was presented to emperor Charles V.

After his victory over the Schmalkaldic League, Charles V convened the Diet of 1547/48 (geharnischter Reichstag), where the Augsburg Interim was proclaimed. This attempt to give Catholicism the priority was rejected by many princes, though, and a resolution of the confessional tensions was only achieved at the session in 1555, where the Peace of Augsburg was concluded. The treaty acknowledged the Augsburg Confession and codified the cuius regio, eius religio principle, which gave each prince the power to decide the religion of his subjects.

The decrees of the Council of Trent were acknowledged in Italy, Portugal, Poland, and by the Catholic princes of Germany at the Diet of Augsburg held in 1566.

The Diet of Augsburg were the meetings of the Imperial Diet of the Holy Roman Empire in the German city of Augsburg. Between 1500 and 1600, twelve of thirty-five imperial diets were held in Augsburg, a result of the close financial relationship between the Augsburg based banking families and the reigning Habsburg emperors, particularly Maximilian I and Charles V. Among those diets three were especially noteworthy: the session of 1530, 1547/48 as well as 1555.

The 1530 Imperial Diet of Augsburg was requested by Emperor Charles V to decide on three issues: defending the empire against the Turks, welfare and currency policy, and disagreements over Christianity. One of the results of the 1530 Diet of Augsburg was the Augsburg confession, written by Philipp Melanchthon and was intended “to be an expression of the faith of the universal Church, and thus a basis for a reconciliation between the Lutheran Reformers and the Roman Church”. The Emperor Charles V called for the Diet of Augsburg in 1530 in attempt to reach some compromise and a chance to deal with the German situation. The climate during this time was vastly different from what we see today when the Lutheran church moved to reformation at the assembly of Augsburg.

Following the Diet of Augsburg in 1530 was the Augsburg Interim in 1548 which was the imperial decree given by Charles V after his army won against the Schmalkaldic League during the Schmalkaldic War of 1547/48. The tensions between Charles V and the German Lutheran princes were finally resolved with the Peace of Augsburg in 1555, which formally acknowledged Protestantism as a legitimate religion of the Empire.

The Diet of Augsburg

The Diet of Augsburg produced numerous outcomes, most notably the Lutheran document known as the Augsburg Confession, written by Philipp Melanchthon, who during the diet withstood a variety of attacks while formulating the confession. According to Joachim Camerarius, his first biographer, Melanchthon “did not bend the truth to win favor or meet objections; at the same time he avoided unnecessary conflict”. Camerarius also mentions that during the diet, Melanchthon cried when hearing his work during this intense time of negotiations.

Charles V could not bring himself to openly discuss the matters of religious dispute and cause for division throughout Europe so he stayed away from the Diet of Augsburg. Instead he sent his brother Ferdinand to have authority over discussions at the Diet. The emperor requested that three issues be decided at the diet: first, the defense of the empire against the Turks; second, issues related to policy, currency and public well being; and, third, disagreements about Christianity.

Procedures of the Diet

The diet was organized into three separate colleges: electors, ecclesiastical and secular sovereigns, and imperial cities. However, unlike other diets, the Diet of Augsburg did not possess fixed rules or methods to conduct. Tradition for the diet began to emerge in the 1530s and the diet was to be conducted under these guidelines. Either the emperor or the estates organized day-to-day business of the diet and the proposito functioned as the agenda for the diet but could be easily altered by the diet. The business of the diet was conducted on three levels; the committees, the colleges, and the plenary session.

The plenary sessions or colleges created the committees; this level was staffed by members and/or experts of the diet. The committees would prepare material that would be discussed by colleges and once acted upon, the issue entered the plenary session stage, however this was only ceremonial during the diet of Augsburg.

The issue would continue to be discussed independently then collectively by the College of Electors and College of Sovereigns. Once they were able to confer on a decision the College of Cities would be informed. If they also agreed to the decision this would become a final decision and passed to the Emperor. If the Emperor approved this recommendation he could adopted it but if there were any issues or concerns he would send it back and the process would start again.

The Creation of the Augsburg Confession

There has been a long dispute regarding the Augsburg Confession and what type of confession it truly is. One suggestion is that it is a political and theological confession, which established the Protestant church. Secondly, it is a catholic confession that removes small teachings such as penance. During the 16th century the tensions and relationship that existed between the Emperor, the Pope, the German Princes and the Protestants were quite complex. The confessions of the early centuries of the church were evoked by the Protestant Reformation and of the tensions that existed in the Church. The confession represented the Protestant beliefs during the time of intense political and religious pressures and increasing dimensions. The confession did discuss the basis and role of the papal authority in the Church “but it was decided not to incorporate a statement of the Lutheran position on the papacy in the confession in order to avoid upsetting Charles V and running the danger that he might simply refuse to negotiate with the Lutheran part at the Diet”.

The Emperor Charles V called for the Diet of Augsburg in 1530 in attempt to reach some compromise and a chance to deal with the German situation. The Lutheran church moved to reformation at the assembly of Augsburg. The General Synod of the Lutheran church accepted the twenty-one doctrinal articles with the Abuses altered. The Augsburg confession was written by Philipp Melanchthon “to be an expression of the faith of the universal Church, and thus a basis for a reconciliation between the Lutheran Reformers and the Roman Church.” It contained twenty-one succinct articles of faith to show that the doctrines preached did not match the norms that were traditionally present as well as justifications for the changes in worship and life that occurred from abusive traditions. “No minister, however, considers himself bound to believe every sentiment contained in these 21 articles; only the fundamental doctrines. Accordingly, the pledge of adoption required at licensure and ordination, is couched in the following terms: 1) Do you believe in the Scriptures of the Old and New Testament to be the word of God, and the only infallible rule of faith and practice? 2) Do you believe, that the fundamental doctrines of the word of God, are taught in a manner substantially correct, in the doctrinal articles of the Augsburg Confession?”

Martin Luther’s Contribution to the Confession and Diet of Augsburg

At the time of the Diet of Augsburg, Martin Luther was an outlaw of the Empire and as a result was unable to be present at the Diet. He made himself present through a variety of publications including the composition of Admonition to All the Clergy Assembled at Augsburg. There were five hundred copies that were quickly sold and circulated around during the Diet. A member of the Saxon group, Justus Jonas wrote that Luther’s work seemed inspired while “rebuking the haughtiness of the higher clergy, forcefully asserting ‘the article on necessity,’ and reducing the opponents to silence”. Further, Luther’s impact was evident in August 1530 with the increased resistance of Protestant for concession demands in the later stages of negotiations. Luther was able to read Melanchthon’s confession at an early stage in which he admits that he could have never written it in such a delicate way. He does later note that there “was no article on purgatory and no unmasking of the papal Antichrist”. During mid-July of 1530 Luther was reported having told multiple friends that he lacked expectation that the Diet would lead to any sort of agreement between the two sides.