From Infogalactic: the planetary knowledge core
Jump to: navigation, search
This article is about electric signals via wires. For an immunological model that attempts to explain how T cells survive selection during maturation, see Differential Signaling Hypothesis. 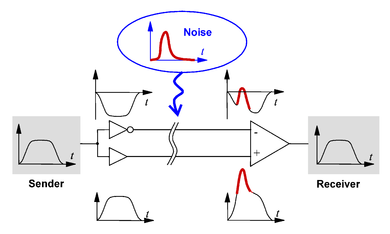 Differential signaling is a method for electrically transmitting information using two complementary signals. The technique sends the same electrical signal as a differential pair of signals, each in its own conductor. The pair of conductors can be wires (typically twisted together) or traces on a circuit board. The receiving circuit responds to the electrical difference between the two signals, rather than the difference between a single wire and ground. The opposite technique is called single-ended signaling. Differential pairs are usually found on printed circuit boards, in twisted-pair and ribbon cables, and in connectors.

Provided that the source- and receiver impedances in the differential signalling circuit are equal, external electromagnetic interference tends to affect both conductors identically. Since the receiving circuit only detects the difference between the wires, the technique resists electromagnetic noise compared to one conductor with an un-paired reference (ground). The technique works for both analog signaling, as in balanced audio—and digital signaling, as in RS-422, RS-485, Ethernet over twisted pair, PCI Express, DisplayPort, HDMI, and USB.

File:Differential Signaling.png
In a system with a differential receiver, desired signals add and noise is subtracted away.

Suitability for use with low-voltage electronics

The electronics industry, particularly in portable and mobile devices, continually strives to lower supply voltage to save power and reduce emitted electromagnetic radiation. A low supply voltage, however, reduces noise immunity. Differential signaling helps to reduce these problems because, for a given supply voltage, it provides twice the noise immunity of a single-ended system.

To see why, consider a single-ended digital system with supply voltage

. The high logic level is

and the low logic level is 0 V. The difference between the two levels is therefore

. Now consider a differential system with the same supply voltage. The voltage difference in the high state, where one wire is at

. The voltage difference in the low state, where the voltages on the wires are exchanged, is

. The difference between high and low logic levels is therefore

In single-ended signaling, the transmitter generates a single voltage that the receiver compares with a fixed reference voltage, both relative to a common ground connection shared by both ends. In many instances single-ended designs are not feasible. Another difficulty is the electromagnetic interference that can be generated by a single-ended signaling system that attempts to operate at high speed.

Data rates of some interfaces implemented with differential pairs

The type of transmission line that connects two devices (chips, modules) dictates the type of signaling. Single-ended signaling is used with coaxial cables, in which one conductor totally screens the other from the environment. All screens (or shields) are combined into a single piece of material to form a common ground. Differential signaling is used with a balanced pair of conductors. For short cables and low frequencies, the two methods are equivalent, so cheap single-ended circuits with a common ground can be used with cheap cables. As signaling speeds become faster, wires begin to behave as transmission lines.

Differential signaling is often used in computers to reduce electromagnetic interference, because complete screening is not possible with microstrips and chips in computers, due to geometric constraints and the fact that screening does not work at DC. If a DC power supply line and a low-voltage signal line share the same ground, the power current returning through the ground can induce a significant voltage in it. A low-resistance ground reduces this problem to some extent. A balanced pair of microstrip lines is a convenient solution, because it does not need an additional PCB layer, as a stripline does. Because each line causes a matching image current in the ground plane, which is required anyway for supplying power, the pair looks like four lines and therefore has a shorter crosstalk distance than a simple isolated pair. In fact, it behaves as well as a twisted pair. Low crosstalk is important when many lines are packed into a small space, as on a typical PCB.