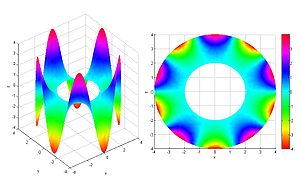 This article considers mainly linear operators, which are the most common type. However, non-linear differential operators, such as the Schwarzian derivative also exist.

Assume that there is a map

from a function space

to another function space

is the image of

and its derivatives containing higher degree such as

where the set of non-negative integers,

, is called a multi-index,

are functions on some open domain in n-dimensional space and

The derivative above is one as functions or, sometimes, distributions or hyperfunctions and

The most common differential operator is the action of taking the derivative itself. Common notations for taking the first derivative with respect to a variable x include:

When taking higher, nth order derivatives, the operator may also be written:

The derivative of a function f of an argument x is sometimes given as either of the following:

The D notation's use and creation is credited to Oliver Heaviside, who considered differential operators of the form

in his study of differential equations.

One of the most frequently seen differential operators is the Laplacian operator, defined by

Another differential operator is the Θ operator, or theta operator, defined by[1]

This is sometimes also called the homogeneity operator, because its eigenfunctions are the monomials in z:

In n variables the homogeneity operator is given by

As in one variable, the eigenspaces of Θ are the spaces of homogeneous polynomials.

Such a bidirectional-arrow notation is frequently used for describing the probability current of quantum mechanics.

Del is used to calculate the gradient, curl, divergence, and Laplacian of various objects.

Adjoint of an operator

Given a linear differential operator T

the adjoint of this operator is defined as the operator

Formal adjoint in one variable

In the functional space of square integrable functions, the scalar product is defined by

where the line over g(x) denotes the complex conjugate of g(x). If one moreover adds the condition that f or g vanishes for

, one can also define the adjoint of T by

is defined according to this formula, it is called the formal adjoint of T.

A (formally) self-adjoint operator is an operator equal to its own (formal) adjoint.

If Ω is a domain in Rn, and P a differential operator on Ω, then the adjoint of P is defined in L2(Ω) by duality in the analogous manner:

for all smooth L2 functions f, g. Since smooth functions are dense in L2, this defines the adjoint on a dense subset of L2: P* is a densely defined operator.

The Sturm–Liouville operator is a well-known example of a formal self-adjoint operator. This second-order linear differential operator L can be written in the form

This property can be proven using the formal adjoint definition above.

This operator is central to Sturm–Liouville theory where the eigenfunctions (analogues to eigenvectors) of this operator are considered.

where f and g are functions, and a is a constant.

Some care is then required: firstly any function coefficients in the operator D2 must be differentiable as many times as the application of D1 requires. To get a ring of such operators we must assume derivatives of all orders of the coefficients used. Secondly, this ring will not be commutative: an operator gD isn't the same in general as Dg. In fact we have for example the relation basic in quantum mechanics:

The subring of operators that are polynomials in D with constant coefficients is, by contrast, commutative. It can be characterised another way: it consists of the translation-invariant operators.

The same constructions can be carried out with partial derivatives, differentiation with respect to different variables giving rise to operators that commute (see symmetry of second derivatives).

be the non-commutative polynomial ring over R in the variable D and X, and I the two-sided ideal generated by DX-XD-1, then the ring of univariate polynomial differential operators over R is the quotient ring

. This is a non-commutative simple ring. Every elements can be written in a unique way as a R-linear combination of monomials of the form

. It supports an analogue of the Euclidean division of polynomials.

(for the standard derivation) can be identified with modules over

be the non-commutative polynomial ring over R in the variables

, and I the two-sided ideal generated by the elements

is Kronecker delta, then the ring of multivariate polynomial differential operators over R is the quotient ring

This is a non-commutative simple ring. Every elements can be written in a unique way as a R-linear combination of monomials of the form

where jk: Γ(E) → Γ(Jk(E)) is the prolongation that associates to any section of E its k-jet.

This just means that for a given section s of E, the value of P(s) at a point x ∈ M is fully determined by the kth-order infinitesimal behavior of s in x. In particular this implies that P(s)(x) is determined by the germ of s in x, which is expressed by saying that differential operators are local. A foundational result is the Peetre theorem showing that the converse is also true: any (linear) local operator is differential.

is defined as the commutator

This approach is also used to study functions of several complex variables and functions of a motor variable.

The conceptual step of writing a differential operator as something free-standing is attributed to Louis François Antoine Arbogast in 1800.[2]