Digitalis (/ˌdɪdʒᵻˈteɪlᵻs/[1] or /ˌdɪdʒᵻˈtælᵻs/[2]) is a genus of about 20 species of herbaceous perennials, shrubs, and biennials commonly called foxgloves.

This genus was traditionally placed in the figwort family Scrophulariaceae, but recent phylogenetic research has placed it in the much enlarged family Plantaginaceae.[3] This genus is native to western and southwestern Europe,[4] western and central Asia, Australasia and northwestern Africa. The scientific name means "finger-like" and refers to the ease with which a flower of Digitalis purpurea can be fitted over a human fingertip. The flowers are produced on a tall spike, are tubular, and vary in colour with species, from purple to pink, white, and yellow. The best-known species is the common foxglove, Digitalis purpurea. This biennial plant is often grown as an ornamental plant due to its vivid flowers which range in colour from various purple tints through various shades of light gray, and to purely white. The flowers can also possess various marks and spottings.

The first year of growth of the common foxglove produces only the stem with its long, basal leaves. During the second year of the plant's life, a long, leafy stem from 50 to 255 centimeters tall grows atop the roots of healthy plants.

The larvae of the moth the "foxglove pug" consume the flowers of the common foxglove for food. Other species of Lepidoptera eat the leaves, including the lesser yellow underwing.

The term digitalis is also used for drug preparations that contain cardiac glycosides, particularly one called digoxin, extracted from various plants of this genus.

The name foxglove is formed of the elements fox and glove.[5] The name is recorded in Old English as foxes glofe/glofa 'fox's glove',[6] though there it does not refer to Digitalis.[5] Although the elements of the name are transparent, their meaning is not. Because it is not clear why the flower should be called foxglove, other etymologies have been offered. Henry Fox Talbot (1847) proposed folks' glove, where folk means fairy.[5] Similarly, R. C. A. Prior (1863) suggested that an etymology of foxes-glew, meaning 'fairy music'.[5] However, neither of these suggestions account for the Old English form foxes glofa.[7]

Digitalis species thrive in acidic soils, in partial sunlight to deep shade, in a range of habitats, including open woods, woodland clearings, moorland and heath margins, sea-cliffs, rocky mountain slopes and hedge banks.[4][8] It is commonly found on sites where the ground has been disturbed, such as recently cleared woodland, or where the vegetation has been burnt.[9]

A group of medicines extracted from foxglove plants are called digitalin. The use of D. purpurea extract containing cardiac glycosides for the treatment of heart conditions was first described in the English-speaking medical literature by William Withering, in 1785,[10][11] which is considered the beginning of modern therapeutics.[12][13] It is used to increase cardiac contractility (it is a positive inotrope) and as an antiarrhythmic agent to control the heart rate, particularly in the irregular (and often fast) atrial fibrillation. Digitalis is hence often prescribed for patients in atrial fibrillation, especially if they have been diagnosed with congestive heart failure. Digoxin was approved for heart failure in 1998 under current regulations by the Food and Drug Administration on the basis of prospective, randomized study and clinical trials. It was also approved for the control of ventricular response rate for patients with atrial fibrillation. American College of Cardiology/American Heart Association guidelines recommend digoxin for symptomatic chronic heart failure for patients with reduced systolic function, preservation of systolic function, and/or rate control for atrial fibrillation with a rapid ventricular response. Heart Failure Society of America guidelines for heart failure provide similar recommendations. Despite its relatively recent approval by the Food and Drug Administration and the guideline recommendations, the therapeutic use of digoxin is declining in patients with heart failure—likely the result of several factors. Safety concerns regarding a proposed link between digoxin therapy and increased mortality in women may be contributing to the decline in therapeutic use of digoxin.

A group of pharmacologically active compounds are extracted mostly from the leaves of the second year's growth, and in pure form are referred to by common chemical names, such as digitoxin or digoxin, or by brand names such as Crystodigin and Lanoxin, respectively. The two drugs differ in that digoxin has an additional hydroxyl group at the C-3 position on the B-ring (adjacent to the pentane). Both molecules include a lactone and a triple-repeating sugar called a glycoside.

Digitalis works by inhibiting sodium-potassium ATPase. This results in an increased intracellular concentration of sodium ions and thus a decreased concentration gradient across the cell membrane. This increase in intracellular sodium causes the Na/Ca exchanger to reverse potential, i.e., transition from pumping sodium into the cell in exchange for pumping calcium out of the cell, to pumping sodium out of the cell in exchange for pumping calcium into the cell. This leads to an increase in cytoplasmic calcium concentration, which improves cardiac contractility. Under normal physiological conditions, the cytoplasmic calcium used in cardiac contractions originates from the sarcoplasmic reticulum, an intracellular organelle that specializes in the storage of calcium. Human newborns, some animals, and patients with chronic heart failure lack well developed and fully functioning sarcoplasmic reticula and must rely on the Na/Ca exchanger to provide all or a majority of the cytoplasmic calcium required for cardiac contraction. For this to occur, cytoplasmic sodium must exceed its typical concentration to favor a reversal in potential, which naturally occurs in human newborns and some animals primarily through an elevated heart rate; in patients with chronic heart failure it occurs through the administration of digitalis. As a result of increased contractility, stroke volume is increased. Ultimately, digitalis increases cardiac output (Cardiac Output=Stroke Volume x Heart Rate). This is the mechanism that makes this drug a popular treatment for congestive heart failure, which is characterized by low cardiac output. Digitalis also has a vagal effect on the parasympathetic nervous system, and as such is used in re-entrant cardiac arrhythmias and to slow the ventricular rate during atrial fibrillation. The dependence on the vagal effect means digitalis is not effective when a patient has a high sympathetic nervous system drive, which is the case with acutely ill persons, and also during exercise. 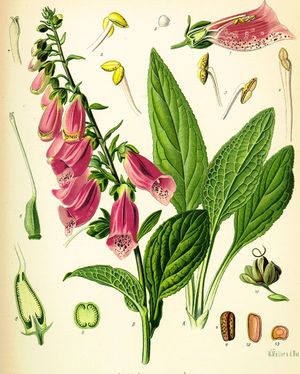 Digitalis toxicity (Digitalis intoxication) results from an overdose of digitalis and causes nausea, vomiting and diarrhea, as well as sometimes resulting in xanthopsia (jaundiced or yellow vision) and the appearance of blurred outlines (halos), drooling, abnormal heart rate, cardiac arrhythmias, weakness, collapse, dilated pupils, tremors, seizures, and even death. Bradycardia also occurs. Because a frequent side effect of digitalis is reduction of appetite, some individuals have used the drug as a weight-loss aid.

Digitalis is an example of a drug derived from a plant that was formerly used by folklorists and herbalists; herbalists have largely abandoned its use because of its narrow therapeutic index and the difficulty of determining the amount of active drug in herbal preparations. Once the usefulness of digitalis in regulating the human pulse was understood, it was employed for a variety of purposes, including the treatment of epilepsy and other seizure disorders, which are now considered to be inappropriate treatments.

The entire plant is toxic (including the roots and seeds). Mortality is rare, but case reports do exist. Most plant exposures occur in children younger than six years and are usually unintentional and without associated significant toxicity. More serious toxicity occurs with intentional ingestions by adolescents and adults.[14] Early symptoms of ingestion include nausea, vomiting, diarrhea, abdominal pain, wild hallucinations, delirium, and severe headache. Depending on the severity of the toxicosis, the victim may later suffer irregular and slow pulse, tremors, various cerebral disturbances, especially of a visual nature (unusual colour visions (see xanthopsia) with objects appearing yellowish to green, and blue halos around lights), convulsions, and deadly disturbances of the heart. For a case description, see the paper by Lacassie.[15] Vincent van Gogh's "Yellow Period" may have been influenced by digitalis therapy which, at the time, was thought to control seizures. As noted above, other oculotoxic effects of digitalis include generalized blurry vision, as well as seeing a "halo" around each point of light.[16]

In some instances, people have confused digitalis with the relatively harmless comfrey (Symphytum) plant, which is often brewed into a tea, with fatal consequences. Other fatal accidents involve children drinking the water in a vase containing digitalis plants.[17] Drying does not reduce the toxicity of the plant. The plant is toxic to animals, including all classes of livestock and poultry, as well as felines and canines.

Digitalis poisoning can cause heart block and either bradycardia (decreased heart rate) or tachycardia (increased heart rate), depending on the dose and the condition of one's heart. Notably, the electric cardioversion (to "shock" the heart) is generally not indicated in ventricular fibrillation in digitalis toxicity, as it can increase the dysrhythmia.[citation needed] Also, the classic drug of choice for ventricular fibrillation in emergency setting,[18] amiodarone, can worsen the dysrhythmia caused by digitalis, therefore, the second-choice drug lidocaine is more commonly used.[citation needed]

Digoxigenin (DIG) is a steroid found exclusively in the flowers and leaves of the plants D. purpurea and D. lanata. It is used as a molecular probe to detect DNA or RNA. It can easily be attached to nucleotides by chemical modifications. DIG molecules are often linked to uridine nucleotides; DIG-labelled uridine (DIG-U) can then be incorporated into RNA probes via in vitro transcription. Once hybridisation occurs in situ, RNA probes with the incorporated DIG-U can be detected with anti-DIG antibodies that are conjugated to alkaline phosphatase. To reveal the hybridised transcripts, alkaline phosphatase can be reacted with a chromogen to produce a coloured precipitate.