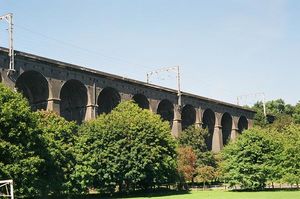 Welwyn Viaduct from the ground

The Digswell Viaduct, also called Welwyn Viaduct, is a railway viaduct that carries the East Coast Main Line over the River Mimram and is a locally important landmark. It is located between Welwyn Garden City and Digswell. It is just to the south of Welwyn North railway station.

The viaduct is a Grade II* listed structure.[1]

The viaduct is around 1,560 feet (475 m) long and comprises forty arches of 30 ft (9 m) span, and is 100 ft (30 m) high from ground level to trackbed.[citation needed] It is built of brick fired from brick clay quarried on site during construction, and took two years to build, including the construction of embankments at both ends which required the movement of around one million tons of earth by human and horse power. It was designed by William Cubitt and styled after a Roman aqueduct.

It was officially opened by Queen Victoria on 6 August 1850, but she was so frightened of its height that she refused to travel across it. The train carrying her had to stop, upon which she left the train and entered a horse-drawn carriage to travel the length of the bridge on the ground. She then re-entered the train at the other end of the viaduct and continued her journey.[citation needed]

The viaduct carries the East Coast Main Line, which has to narrow from four tracks to two to cross the viaduct, making it a bottleneck restraining capacity over this strategic transport route.[2] This problem is exacerbated by Welwyn North railway station situated at the northern end of the viaduct, which blocks the line while trains are stationary and two tunnels to the north. Several ideas to overcome the limitations of the viaduct and station without damaging the viaduct's essential historic character and rhythmic design are periodically discussed. The line was electrified in the 1970s.[3]