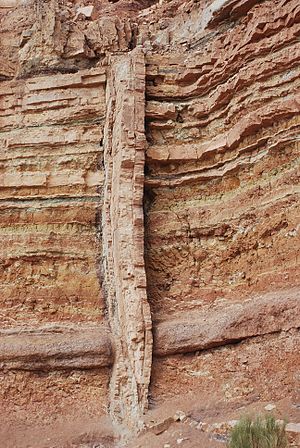 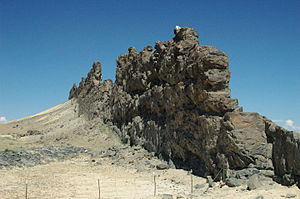 A dike of lamprophyre near the Shiprock volcanic plug, New Mexico, that has resisted the erosion that removed some of the softer rock into which the dike was originally intruded

A dike or dyke, in geological usage, is a sheet of rock that formed in a fracture in a pre-existing rock body. Dikes can be either magmatic or sedimentary in origin. Magmatic dikes form when magma intrudes into a crack then crystallizes as a sheet intrusion, either cutting across layers of rock or through an unlayered mass of rock. Clastic dikes are formed when sediment fills a pre-existing crack.[1]

An intrusive dike is an igneous body with a very high aspect ratio, which means that its thickness is usually much smaller than the other two dimensions. Thickness can vary from sub-centimeter scale to many meters, and the lateral dimensions can extend over many kilometres. A dike is an intrusion into an opening cross-cutting fissure, shouldering aside other pre-existing layers or bodies of rock; this implies that a dike is always younger than the rocks that contain it. Dikes are usually high-angle to near-vertical in orientation, but subsequent tectonic deformation may rotate the sequence of strata through which the dike propagates so that the dike becomes horizontal. Near-horizontal, or conformable intrusions, along bedding planes between strata are called intrusive sills.

Sometimes dikes appear in swarms, consisting of several to hundreds of dikes emplaced more or less contemporaneously during a single intrusive event. The world's largest dike swarm is the Mackenzie dike swarm in the Northwest Territories, Canada.[2]

Dikes often form as either radial or concentric swarms around plutonic intrusives, volcanic necks or feeder vents in volcanic cones. The latter are known as ring dikes.

Dikes can vary in texture and their composition can range from diabase or basaltic to granitic or rhyolitic, but on a global perspective the basaltic composition prevails, manifesting ascent of vast volumes of mantle-derived magmas through fractured lithosphere throughout Earth history. Pegmatite dikes comprise extremely coarse crystalline granitic rocks - often associated with late-stage granite intrusions or metamorphic segregations. Aplite dikes are fine-grained or sugary-textured intrusives of granitic composition.

In contrast to magmatic dikes, a sill is a magmatic sheet intrusion that forms within and parallel to the bedding of layered rock. 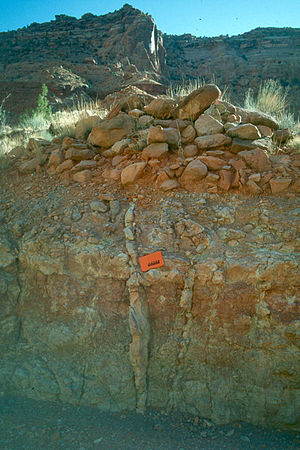 Sedimentary dikes or clastic dikes are vertical bodies of sedimentary rock that cut off other rock layers. They can form in two ways: