From Infogalactic: the planetary knowledge core
Jump to: navigation, search
This article is about the herb. For other uses, see Dill (disambiguation).

Dill (Anethum graveolens) is an annual herb in the celery family Apiaceae.

It is the sole species of the genus Anethum.

"Dill" is a Germanic word whose origin is unknown.[3] 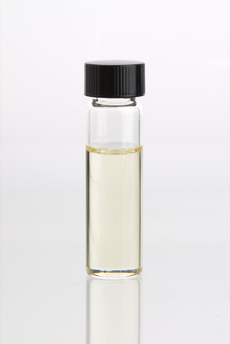 Fresh and dried dill leaves (sometimes called "dill weed" to distinguish it from dill seed) are widely used as herbs in Europe and central Asia.

Like caraway, the fernlike leaves of dill are aromatic and are used to flavor many foods such as gravlax (cured salmon) and other fish dishes, borscht and other soups, as well as pickles (where the dill flower is sometimes used). Dill is best when used fresh as it loses its flavor rapidly if dried; however, freeze-dried dill leaves retain their flavor relatively well for a few months.

Dill seed, having a flavor similar to caraway but also resembling that of fresh or dried dill weed,[8] is used as a spice. Dill oil is extracted from the leaves, stems and seeds of the plant. The oil from the seeds is distilled and used in the manufacturing of soaps. [9]

Dill is the eponymous ingredient in dill pickles: cucumbers preserved in salty brine and/or vinegar.

In central and eastern Europe, Scandinavia, Russia and Finland, dill is a popular culinary herb used in the kitchen along with parsley. Fresh, finely cut dill leaves are used as topping in soups, especially the hot red borsht and the cold borsht mixed with curds, kefir, yoghurt, or sour cream, which is served during hot summer weather and is called okroshka. It is also popular in summer to drink fermented milk (curds, kefir, yoghurt, or buttermilk) mixed with dill (and sometimes other herbs).

In the same way, prepared dill is used as a topping for boiled potatoes covered with fresh butter – especially in summer when there are so-called "new," or young, potatoes. The dill leaves can be mixed with butter, making a dill butter, which can serve the same purpose. Dill leaves mixed with tvorog form one of the traditional cheese spreads used for sandwiches. Fresh dill leaves are used all year round as an ingredient in salads, e.g., one made of lettuce, fresh cucumbers and tomatoes, the way basil leaves are used in Italy and Greece.

In Poland, fresh dill leaves mixed with sour cream are the basis for dressings,. It is especially popular to use this kind of sauce with freshly cut cucumbers, which practically are wholly immersed in the sauce, making a salad called "mizeria". The dill leaves serve as a basis for cooking dill sauce, used hot for baked freshwater fish and for chicken or turkey breast, or used hot or cold for hard-boiled eggs.

In south-eastern Poland it is popular to cook a dill-based soup (zupa koperkowa), served with potatoes and hard-boiled eggs. Whole stems including roots and flower buds are traditionally used to prepare Polish-style pickled cucumbers (ogórki kiszone), especially the so-called low-salt cucumbers ("ogórki małosolne"). Whole stems of dill (often including the roots) are also cooked with potatoes, especially the potatoes of autumn and winter, so they resemble the flavor of the newer potatoes found in summer. Some kinds of fish, especially trout and salmon, are traditionally baked with the stems and leaves of dill.

In Germany, dill is popular as a seasoning for fish and many other dishes, chopped as a garnish on potatoes, and a flavoring in pickles.

In Romania dill (mărar) is widely used as an ingredient for soups such as borş (pronounced "borsh"), pickles and other dishes, especially those based on peas, beans and cabbage. It is popular for dishes based on potatoes and mushrooms and can be found in many summer salads (especially cucumber salad, cabbage salad and lettuce salad). During springtime, it is used with spring onions in omelets. It often complements sauces based on sour cream or yogurt and is mixed with salted cheese and used as a filling. Another popular dish with dill as a main ingredient is dill sauce, which is served with eggs and fried sausages.

In Hungary, dill is very widely used. It is popular as a sauce or filling, especially in Langos, and mixed with a type of cottage cheese. Dill is also used for pickling and in salads. The Hungarian name for dill is kapor.

In Serbia, dill is known as mirodjija and is used as an addition to soups, potato and cucumber salads and French fries. It features in the Serbian proverb "бити мирођија у свакој чорби" /biti mirodjija u svakoj čorbi/ (to be a dill in every soup) which corresponds to the English proverb "to have a finger in every pie".

In Greece, dill is known as 'άνηθος' (anithos). In antiquity it was used as an add-in in wines, which they were called "anithites oinos" (wine with anithos-dill). In modern days, dill is used in salads, soups, sauces, and fish and vegetable dishes.

In Santa Maria, Azores, dill (endro) is the most important ingredient of the traditional Holy Ghost soup (sopa do Espírito Santo). Dill is found practically everywhere in Santa Maria and is curiously rare in the other Azorean Islands.

In Sweden, dill is a common spice or herb. The top of fully grown dill is called krondill (English: Crown dill); this is used when cooking crayfish. The krondill is put in to the water after the crayfish is boiled, but still in hot and salt water. Then the entire dish is stored in refrigerator for at least 24 hours before eating (with toasted bread and butter). Krondill is also used for cucumber pickles. Small cucumbers, sliced or not, are put into a solution of hot water, mild acetic vinegar (not made from wine and without colour), sugar and krondill. After a month or two, the cucumber pickles are ready to eat, for instance, with pork, brown sauce and potatoes, as a "sweetener". The thinner part of dill and young plants may be used with boiled fresh potatoes (as the first potatoes for the year, which usually are small and have a very thin skin). It is used together with, or instead of other green herbs, like parsley, chives and basil, in salads.

In Iran, dill is known as shevid and is sometimes used with rice and called shevid-polo. It is also used in Iranian aash recipes, and is also called sheved in Persian.

In India, dill is known as shepu (शेपू) in Marathi and Konkani, savaa in Hindi or soa in Punjabi. In Telugu, it is called Soa-kura (for herb greens). It is also called sabbasige soppu (ಸಬ್ಬಸಿಗೆ ಸೊಪ್ಪು) in Kannada. In Tamil it is known as sada kuppi(சதகுப்பி). In Malayalam, it is ചതകുപ്പ (chathakuppa) or ശതകുപ്പ (sathakuppa). In Sanskrit, this herb is called shatapushpa. In Gujarati, it is known as suva(સૂવા). In India, dill is prepared in the manner of yellow moong dal as a main-course dish. It is considered to have very good antigas properties,so it is used as mukhwas, or an after-meal digestive. It is also traditionally given to mothers immediately after childbirth. In the state of Uttar Pradesh in India, a smaller amount of fresh dill is cooked along with cut potatoes and fresh fenugreek leaves(Hindi आलू-मेथी-सोया). In Manipur, dill, locally known as pakhon, is an essential ingredient of chagem pomba – a traditional Manipuri dish made with fermented soybean and rice. In Sri Lanka dill is known in Sinhala as "asamodagam" (අසමෝදගම්).

In Laos and parts of northern Thailand, dill is known in English as Lao coriander[10][11] (Lao: ຜັກຊີ, Thai: ผักชีลาว). In the Lao language, it is called phak see, and in Thai, it is known as phak chee Lao.[12][13] In Lao cuisine, Lao coriander is used extensively in traditional Lao dishes such as mok pa (steamed fish in banana leaf) and several coconut milk-based curries that contain fish or prawns.

In China dill is colloquially called huixiang (茴香), or more properly shiluo (莳萝). It is a common filling in baozi and xianbing and can be used vegetarian, with rice vermicelli, or combined with either meat or eggs. Vegetarian dill baozi are a common part of a Beijing breakfast. In baozi and xianbing, it is often interchangeable with non-bulbing fennel and the term 茴香 can also refer to fennel, like caraway and coriander leaf share a name in Chinese as well. Dill is also stir fried as a potherb, often with egg, in the same manner as Chinese chives. It is commonly used in Taiwan as well.

In Vietnam, the use of dill in cooking is regional; it is used mainly in northern Vietnamese cuisine.

In Arab countries, dill seed, called ain jaradeh (grasshopper's eye), is used as a spice in cold dishes such as fattoush and pickles. In Arab countries of the Persian Gulf, dill is called shibint and is used mostly in fish dishes. In Egypt, dillweed is commonly used to flavor cabbage dishes, including mahshi koronb (stuffed cabbage leaves).[14] In Israel, dill seed is used to spice in salads and also to flavor omelette alongside parsley.

In Canada, dill is a favorite herb to accompany poached salmon.

In Anglo-Saxon England, as prescribed in Leechdoms, Wortcunning, and Starcraft of Early England (also called Læceboc, many of whose recipes were borrowed from Greek medicinal texts), dill was used in many traditional medicines, including those against jaundice, headache, boils, lack of appetite, stomach problems, nausea, liver problems, and many other ills.[citation needed] Dill seeds can also be used to prepare herbal tea.

In India the leaves of dill and other greens are used to prepare a variety of local dishes which are served as an accompaniment to rotis or chapatis.

In ancient Greece fragrance was made from the leaves of dill. Also, athletes used to spread essence of dill all over their body, as muscle toner.

The seed is harvested by cutting the flower heads off the stalks when the seed is beginning to ripen. The seed heads are placed upside down in a paper bag and left in a warm, dry place for a week. The seeds then separate from the stems easily for storage in an airtight container. 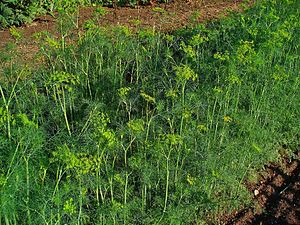 When used as a companion plant, dill attracts many beneficial insects as the umbrella flower heads go to seed. It makes a good companion plant for cucumbers. It is a poor companion for carrots and tomatoes.[15]