From Infogalactic: the planetary knowledge core
Jump to: navigation, search
This article is about the Bavarian town. For other places sharing the name, see Dillingen.

Dillingen, or Dillingen an der Donau (Dillingen on the Danube) is a town in Swabia, Bavaria, Germany. It is the administrative center of the district of Dillingen.

Schretzheim is notable for its 6th to 7th century Alemannic cemetery, 630 row graves in an area of 100 by 140 metres. The counts of Dillingen ruled from the 10th to the 13th century; in 1258 the territory was turned over to the Prince Bishops of Augsburg. After the Reformation, the prince-bishops of Augsburg moved to the Catholic city of Dillingen and made it one of the centers of the Counter-Reformation.

In 1800, during the War of the Second Coalition, the armies of the French First Republic, under command of Jean Victor Moreau, fought Habsburg regulars and Württemberg contingents, under the general command of Pál Kray. Kray had taken refuge in the fortress at Ulm; Moreau diverted his army to approach Ulm from the east and, after a small group of men captured a foothold on the northern bank of the Danube, his forces were able to move against the fortress on both sides of the river. At this battle, the culmination of the Danube Campaign of 1800, Moreau forced Kray to abandon Ulm and withdraw into eastern Bavaria.[2]

A university was established in 1549, but was closed by Napoleon in 1804. The philosophical and theological faculties still existed in the 20th century. In 1971, however, it became a part of the Bavarian Center for the Education and Training of Teachers and Personnel Management (Akademie für Lehrerfortbildung und Personalführung). One of the largest employers in the city is Bosch and Siemens Household Appliances, producer of household applicances. 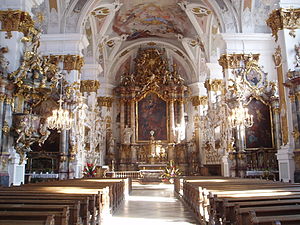 The Church of the Jesuit University of Dillingen (Donau)