From Infogalactic: the planetary knowledge core
Jump to: navigation, search
For the automotive tuning company, see Dinan Cars. For the town in Belgium, see Dinant. For places in Iran, see Dinan, Iran.

Dinan (French: [di.nɑ̃]) is a walled Breton town and a commune in the Côtes-d'Armor department in northwestern France. 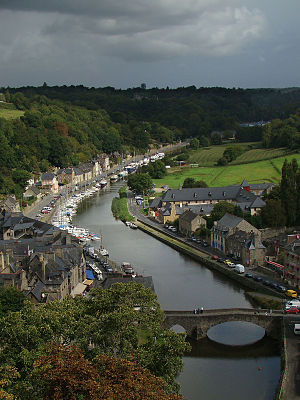 On the banks of the Rance River

Its geographical setting is exceptional. Instead of nestling on the valley floor like Morlaix, most urban development has been on the hillside, overlooking the river Rance. The area alongside the River Rance is known as the port of Dinan and is connected to the town by the steep streets Rue Jerzual and its continuation outside the walls the Rue de Petit Fort. This river has moderate turbidity and its brownish water is somewhat low in velocity due to the slight gradient of the watercourse; pH levels have been measured at 8.13[1] within the city of Dinan and electrical conductivity of the waters have tested at 33 micro-siemens per centimetre. In the centre of Dinan the Rance summer flows are typically in the range of 500 cubic feet per second (14 m3/s).

For many years, the bridge over the River Rance at Dinan was the most northerly crossing point on the river, but the tidal power station at the mouth of the estuary, constructed in the 1960s downstream from Dinan, incorporates a 750 metre long tidal barrage which doubles as a crossing point nearer to the sea. 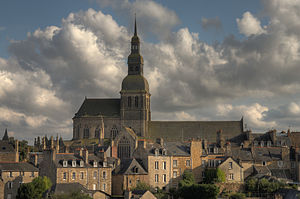 The medieval town on the hilltop has many fine old buildings, some of which date from the 13th century. The town retains a large section of the city walls, part of which can be walked round.

A major highlight in the calendar is Dinan's Fête des Remparts. The town is transformed with decoration and many locals dress up in medieval garb for this two-day festival. The festival takes place over the third weekend in July every even-numbered year.

Prominent people born in Dinan include:

Other people associated with Dinan include:

Dinan Port on the Rance River

Panorama from the belvedere of the Jardin Anglais (English garden)

Dinan is twinned with: