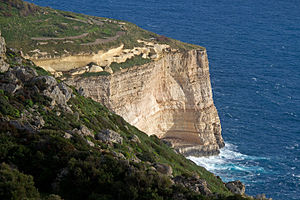 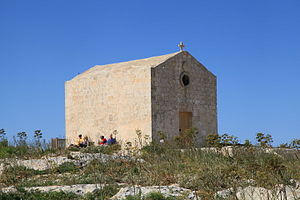 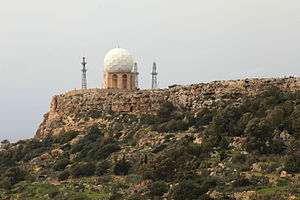 Dingli (Maltese: Ħad-Dingli) is a village in the Northern Region of Malta, with a population of 3,608 as of March 2014.[2] It is 13 kilometres (8 miles) from the capital Valletta and two kilometers (1.2 miles) from the nearest town, Rabat. The village lies on a plateau some 250 metres above sea level, which is one of the highest points of Malta. The area provides not only open sea views over the tiny, uninhabited isle of Filfla, but is also a good vantage point over Malta. From the cliffs there are also views of the nearby Buskett Gardens and Verdala Palace.

The name Dingli is believed to be derived from the name of Sir Thomas Dingley, an English knight of the Order of St. John, who owned much of the lands in the surrounding area.[3]

Rock-cut tombs dating back to Phoenician, Carthaginian and Roman times have been found in the limits of Dingli. Roman baths and other remains were also found at Għajn Handful and the area of Ta' Baldu.

Until the early 16th century, a small village known as Ħal Tartarni existed, somewhere between Buskett and the present location of Dingli.[4] The village was one of the ten original parishes of Malta by 1436, having a church dedicated to Saint Domenica. The original church no longer exists, but a nearby chapel built in 1669 with the same dedication is still standing.

The noble family Inguanez had a lot of land in the area, and employed the population of Ħal Tartarni to work the fields. Over time, the people moved closer towards the fields, abandoning the original village. The new village eventually grew to what is now Dingli. The site of Ħal Tartarni now consists of open fields.[5]

The parish of Dingli was established in 1678. Throughout the rule of the Order of Saint John, Dingli was considered to be safe from corsair attacks because it was impossible for pirates to land in the area due to the Dingli Cliffs.

The village began to see more development after the mid-20th century. Telephone service was introduced in private homes, and public transport began to reach the village itself instead of stopping at Rabat.[6]

Until the early 20th century, it was difficult to send children to school, since boys used to work in the fields while girls helped in the domestic work. This changed over time, and today everyone goes to school, on both primary and secondary levels. Some continue their studies on post-secondary and tertiary levels, from where they can attain a doctorate in their field of study.

Dingli was the birthplace of several eminent personalities, including: