From Infogalactic: the planetary knowledge core
Jump to: navigation, search
For the Fiat model of the same name, see Fiat Dino. For the 1958 Formula One car, see Ferrari 246 Dino.

Dino [ˈdinɔ] was a marque for mid-engined, rear-drive sports cars produced by Ferrari from 1968 to 1976. Used for models with engines with fewer than 12 cylinders, it was an attempt by the company to offer a relatively low-cost sports car. The Ferrari name remained reserved for its premium V-12 and flat 12 models until 1976, when "Dino" was retired in favour of full Ferrari branding.

Named to honour Ferrari founder Enzo Ferrari's son and heir Dino Ferrari, the Dino models used Ferrari racing naming designation of displacement and cylinder count with two digits for the size of the engine in deciliters and the third digit to represent the number of cylinders, i.e. 246 being a 2.4-litre 6-cylinder and 308 being a 3.0-litre 8-cylinder. Ferrari street models of the time used a three-digit representation of the displacement in cubic centimeters of one of the 12 cylinders, which would have been meaningless in a brand with differing numbers of cylinders. 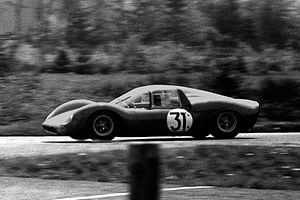 The "Dino" marque was created to market a lower priced, "affordable" sports car capable of taking on the Porsche 911. Ferrari's expensive V12s well exceeded the 911 in both performance and price. Enzo did not want to diminish his exclusive brand with a cheaper car, so the "Dino" was created.

The name "Dino" honours the founder's late son, Alfredo "Dino" Ferrari, credited with designing the V6 engine used by the marque. Along with famed engineer Vittorio Jano, Dino influenced Enzo Ferrari's decision to produce a line of racing cars in the 1950s, with V6 and V8 engine designs. History shows that Alfredo Ferrari did not have a hand in the actual design of the V6 motor that made its way into the Dino.

Ferrari wished to race in the new 1.6 L Formula 2 category in 1967 with the Dino V6 engine. However, the company could not meet the homologation rules which called for 500 production vehicles using the engine to be produced. Enzo Ferrari therefore asked Fiat to co-produce a sports car using the V6, and the front-engined, rear-drive Fiat Dino was born. It used a 2.0 L (1987 cc) version of the Dino V6, allowing Ferrari to compete in the category.

At the time, the thought of using a mid-engine layout in a production car was quite daring, although the design was common in the world of sports car racing. A mid-engined layout placed more of the car's weight over the driven wheels, and allowed for a streamlined nose, but led to a cramped passenger compartment and more challenging handling. Lamborghini created a stir in 1966 with its mid-engined Miura, but Enzo Ferrari felt that a mid-engine Ferrari would be unsafe in the hands of his customers. Eventually he relented, and allowed designer Sergio Pininfarina to build a mid-engined concept for the 1965 Paris Motor Show, but demanded that it wear the Dino badge alone. The 1966 Turin car show featured a refined Dino 206S. The Turin 206S was a closer prototype to the actual production version. Response to the radically styled car was positive, so Ferrari allowed it to go into production, rationalizing that the low-power V6 engine would keep his customers out of trouble.

The Dino 246 was the first Ferrari model produced in high numbers.

The first road-going Dino as well as the first Ferrari-built road car was the 1968 Dino 206 GT, designed by Leonardo Fioravanti at Pininfarina.[1]

Other notable changes from the 206 were the body, now made of steel instead of aluminium, and a 60 mm (2.4 in) longer wheelbase than the 206. Three series of the Dino 246 GT were built, with differences in wheels, windshield wiper coverage, and engine ventilation. Dino 246 production numbered 2,295 GTs and 1,274 GTSs, for a total production run of 3,569.

The 308 GT4 wore the Dino badge until May 1976, when it finally got the Ferrari "Prancing Horse" badge on the hood, wheels, and the steering wheel.