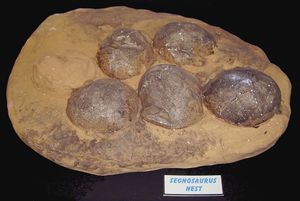 Exhibit of Segnosaurus nest with eggs

Dinosaurland Fossil Museum (aka Dinosaurland) is a privately owned fossil museum in Lyme Regis, on the Jurassic Coast in Dorset, England.[2][3][4] The museum is located in a historic Grade I listed former congregational church building.

The museum, opened in 1989, is owned and run by Steve Davies, a former chief palaeontologist for BP.[5][6] It contains a collection of local marine fossils from the Jurassic period. The museum organizes guided fossil hunting walks.[7] There is a museum shop that sells fossils and minerals.[4][8]

The fossil collection is housed on the ground floor.[9] As well as local Jurassic fossils, there are dinosaurs from China. There are also modern shells and skeletons on display. The museum has a small collection of dinosaur fossils on show (such as a large dinosaur coprolite, a Megalosaurus skeleton and a Chinese dinosaur, of unknown genus).

The museum is located on Coombe Street in a 250-year-old Grade I listed building that used to be a congregational church.[1] The church was built between 1750 to 1755 by John Whitty. It was where Mary Anning (1799–1847), an early fossil hunter, was baptised and later attended for worship.[10]

The two storey building has a hipped roof and rusticated quoins. The round-headed doorway has Doric pilasters on either side. There is a 19th-century addition to the left hand end of the building.[11]