From Infogalactic: the planetary knowledge core
(Redirected from Diocese of Bayeux)
Jump to: navigation, search

The Roman Catholic Diocese of Bayeux and Lisieux, is a diocese of the Latin Rite of the Roman Catholic church in France. The diocese is coextensive with the Department of Calvados, and is a suffragan to the Archdiocese of Rouen, also in Normandy.

At the time of the Concordat of 1802, the ancient Diocese of Lisieux was united to that of Bayeux. A pontifical Brief, in 1854, authorized the Bishop of Bayeux to call himself Bishop of Bayeux and Lisieux. 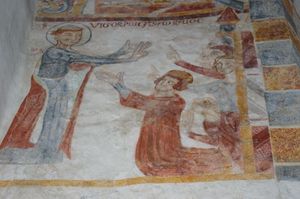 Saint Vigor was bishop of Bayeux during the 6th century.

A local legend, found in the breviaries of the 15th century, makes St. Exuperius, first Bishop of Bayeux, an immediate disciple of St. Clement, and his see a foundation of the 1st century; St. Regnobertus, the same legend tells us, was the successor of St. Exuperius, but the Bollandists and M. Jules Lair found little ground for this legend; it was only towards the middle of the 4th century that St. Exuperius founded the See of Bayeux; after him the priest St. Reverendus worked to spread Christianity in these parts.

Certain successors of St. Exuperius were saints: Rufinianus; Lupus (about 465); Vigor (beginning of the 6th century), who destroyed a pagan temple, then still frequented; Regnobertus (about 629), who founded many churches, and whom the legend, owing to an anachronism, made first successor to Exuperius; and Hugues (d. 730), simultaneously bishop of two other sees, Paris and Rouen.

We may also mention Odon of Conteville (1050–97), brother of William the Conqueror, who built the cathedral, was present at the Battle of Hastings, intrigued for the tiara on the death of Gregory VII (1085), and died a crusader in Sicily; Cardinal Trivulce (1531–48), papal legate in the Roman Campagna during the siege and pillage of Rome by the Constable de Bourbon; Arnaud Cardinal d'Ossat (1602–04), an illustrious diplomatist prominently identified with the conversion of Henry IV of France. Claude Fauchet, who after being court preacher to Louis XVI, became one of the "conquerors" of the Bastille, was chosen Constitutional Bishop of Bayeux in 1791, and was beheaded 31 October 1793. Léon-Adolphe Amette, Archbishop of Paris was, until 1905, Bishop of Bayeux.

In the Middle Ages Bayeux and neighbouring Lisieux (later merged in) were very important sees. The Bishop of Bayeux was senior among the Norman bishops, and the chapter was one of the richest in France. The See of Lisieux maintained the Collége de Lisieux at Paris for poor students of the diocese.

Important councils were held within this diocese, at Caen, in 1042 and 1061; in the latter was proclaimed "the Truce of God". The statutes of a synod held at Bayeux about 1300, furnish a very fair idea of the discipline of the time.

Among the abbeys of the Diocese of Bayeux should be mentioned those of St. Stephen (Abbaye-aux-Hommes) and of the Trinity (Abbaye-aux-Dames), both founded at Caen by William the Conqueror (1029–87) and his wife Matilda, in expiation of their unlawful marriage. The former of these abbeys was governed by the celebrated Lanfranc, afterwards Archbishop of Canterbury. Other abbeys were those of Troarn of which Durand, the successful opponent of Berengarius, was abbot in the 11th century, and the Abbaye du Val, of which Rancé was abbot, in 1661, prior to his reform of La Trappe Abbey. The Abbey of St. Evroul (Ebrulphus) in the diocese of Lisieux, founded about 560 by St. Evroul, a native of Bayeux, is famous as the home of Ordericus Vitalis, the chronicler (1075–1141).

Saint Jean Eudes founded in 1641 in Caen the congregation of Notre Dame de Charité du Refuge, which is devoted to the protection of girls and included 33 monasteries in France and elsewhere in 1900. At Tilly, in the diocese of Bayeux, Michel Vingtras established, in 1839, the politico-religious society known as La Miséricorde, in connexion with the survivors of La Petite Eglise, which was condemned in 1843 by Gregory XVI. Daniel Huet, the famous savant (1630–1721) and Bishop of Avranches, was a native of Caen.

With Lyons Bayeux was one of the French dioceses which did not abandon its 'Gallican' rite in favour of Roman use in the years following the First Vatican Council (1870).