The Diocese of Rome (Latin: Dioecesis Urbis seu Romana,[5] Italian: Diocesi di Roma) is a diocese of the Catholic Church in Rome. Its bishop, known as the Pope, is the Supreme Pontiff and leader of the Catholic Church. As the Holy See, it is a sovereign entity with diplomatic relations,[6] and civil jurisdiction over the Vatican City State within Rome. The Diocese of Rome is the metropolitan diocese of the Province of Rome, an ecclesiastical province in the Episcopal Conference of Italy. The Catholic Church teaches that the first Bishop of Rome was Saint Peter in the first century; the incumbent since 13 March 2013 is Pope Francis.

The bishop of the Diocese of Rome has, in the first place, the title of Bishop of Rome, the basis for all his other titles. Those officially listed for him in the Annuario Pontificio are:

The best-known title, that of "Pope", does not appear in the official list, but is commonly used in the titles of documents, and appears, in abbreviated form, in their signatures.

Further information: History of the papacy

The best evidence available for the origins of the Church in Rome is Saint Paul's Epistle to the Romans. This indicates that the church was established probably by the early 40s. Saint Peter became associated with this church sometime between the year 58 and the early 60s.[7]

The final years of the first century and the early years of the second constitute the "postapostolic" period, as reflected in the extrabiblical writings of Clement of Rome and Ignatius of Antioch. By now the church at Rome was exercising a pastoral care that extended beyond its own community, having replaced Jerusalem as the practical center of the growing universal Church. Appeals were made to Peter and Paul, with whom the Roman church was most closely identified.[7]

The city of Rome has grown beyond the boundaries of the diocese. Notable parts of the city belong to the dioceses of Ostia and Porto-Santa Rufina. Ostia is administered together with the Vicariate of the City and thus included in the statistics given below, while Porto is instead administered by its own diocesan bishop. 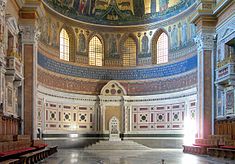 The Papal Cathedra, the throne of the Pope in the Archibasilica Lateranensis.

The territory of the diocese includes Vatican City State and the city of Rome, capital of the Italian Republic, with distinct vicars general for the two parts:

Vicariate of the Vatican City

the territory of the Vatican City State. It consists of two parishes: Saint Peter's Basilica and Saint Anne in Vatican.[8][9] The current Vicar General for Vatican City is Angelo Comastri.

the territory under Italian sovereignty and including the Archbasilica of St. John Lateran, which is the cathedral of the diocese. The Vicar General for the Vicariate of Rome is called the Cardinal Vicar (Italian: Cardinale Vicario); the incumbent is Agostino Vallini. The Vicariate's website lists 335 active and 5 suppressed parishes in its territory[10]

Unless the bishop of a diocese reserves some acts to himself, vicars general have within a diocese the power to place all administrative acts that belong to the bishop except those that in law require a special mandate of the bishop.[11]

Six of the dioceses of the Roman Province are described as suburbicarian.[14] Each suburbicarian diocese has a Cardinal Bishop at its head.

There remains the titular Suburbicarian See of Ostia, held, in addition to his previous suburbicarian see, by the Cardinal Bishop elected to be the Dean of the College of Cardinals. The Diocese of Ostia was merged with the Diocese of Rome in 1962, and is now administered by a Vicar General, in tight cooperation with the Vicar General for Rome. It was also diminished to contain only the cathedral parish of Ostia (Sant'Aurea in Ostia Antica), which, however, in 2012 was divided into two parishes, who together form the present diocese of Ostia.

Other dioceses that have Rome as their metropolitan see:

Numerous ordinaries outside the Province of Rome are "directly subject to the Holy See", including: