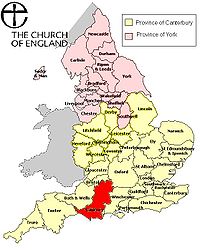 Map of the dioceses of the Church of England showing Salisbury Diocese in red.

The Diocese of Salisbury is a Church of England diocese in the south of England. The diocese covers Dorset and most of Wiltshire (excepting a part in the north and Swindon) and is a constituent diocese of the ecclesiastical Province of Canterbury. The diocese is led by the Bishop of Salisbury (Nick Holtam) and the diocesan synod. The bishop's seat is at Salisbury Cathedral.

Herman of Wilton, bishop of both Ramsbury and then Sherborne,[1] obtained approval from Edward the Confessor to transfer his seat to Malmesbury, but this plan was blocked by the monks of Malmesbury Abbey and Earl Godwin.[2] Instead, following the Norman conquest, the 1075 Council of London named him Bishop of Sarisberie[3] (Latin: Seriberiensis episcopus[4]), which had been made a royal stronghold by William I. This was at Old Sarum. Disputes between the bishops Herbert and Richard Poore and the sheriffs of Wiltshire led to the removal of the see in the 1220s to a new site on Salisbury Plain. This was chartered as the city of New Sarum by King Henry III in 1227,[5] but it was not until the 14th century that the office was described (by Robert Wyvil) as the Bishop of Sarum (episcopus Sarum).[6] The diocese, like the city it administers, is now known as Salisbury. The archdeaconry around Salisbury, however, retains the name of Sarum.

Reforms within the Church of England led to the annexation of Dorset from the abolished diocese of Bristol in 1836; Berkshire, however, was removed the same year and given to Oxford.

In 1925 and 1974, new suffragan bishops were appointed to assist the Bishop of Salisbury; the new offices were titled the bishops of Sherborne and Ramsbury, respectively.[1] Until 2009[7] the bishops operated under an episcopal area scheme established in 1981, with each suffragan bishop having a formal geographical area of responsibility, and being known as "area bishops". The Bishop of Ramsbury had oversight of the diocese's parishes in Wiltshire, while the Bishop of Sherborne had oversight of the diocese's parishes in Dorset. This scheme was replaced to reflect the increased working across the whole diocese by all three bishops. The two suffragans may now legally function anywhere in the diocese, and the Bishop of Salisbury may delegate any of his functions to them.

The diocese is also divided into four archdeaconries, two for each county. These are further subdivided into deaneries and parishes.

The diocesan Bishop of Salisbury is assisted across the diocese by two suffragans – the Bishop of Sherborne and the Bishop of Ramsbury. The provincial episcopal visitor (since 1994, for parishes in this diocese – among twelve others in the western part of the Province of Canterbury – who reject the ministry of priests who are women) is Jonathan Goodall, Bishop suffragan of Ebbsfleet, who is licensed as an honorary assistant bishop of the diocese in order to facilitate his work there.

There are several former bishops licensed as honorary assistant bishops in the diocese:

The Sarum Rite (more properly called Sarum Use) was a variant of the Roman Rite widely used for the ordering of Christian public worship, including the Mass and the Divine Office. It was established by Saint Osmund, Bishop of Salisbury in the 11th century[13] and was originally the local form used in the Cathedral and Diocese of Salisbury; it later became prevalent throughout southern England and came to be used throughout most of England, Wales, Ireland and later Scotland until the reign of Queen Mary.[14] Although abandoned after the 16th century, it was also a notable influence on the pattern of Anglican liturgy represented in the Book of Common Prayer. Occasional interest in and attempts at restoration of the liturgy by Anglicans and Roman Catholics have not produced a general revival, however.