Diocletian's Palace (Croatian: Dioklecijanova palača, pronounced [diɔklɛt͡sijǎːnɔʋa pǎlat͡ʃa]) is an ancient palace built by the Roman emperor Diocletian at the turn of the fourth century AD, that today forms about half the old town and city center of Split, in Croatia. While it is referred to as a "palace" because of its intended use as the retirement residence of Diocletian, the term can be misleading as the structure is massive and more resembles a large fortress: about half of it was for Diocletian's personal use, and the rest housed the military garrison.

Diocletian built the massive palace in preparation for his retirement on 1 May 305 AD. It lies in a bay on the south side of a short peninsula running out from the Dalmatian coast, four miles from Salona, the capital of the Roman province of Dalmatia. The terrain slopes gently seaward and is typical karst, consisting of low limestone ridges running east to west with marl in the clefts between them.

The modern-day center of Split, with Diocletian's Palace, in 2012 (viewed from the north-east).

After the Romans abandoned the site, the Palace remained empty for several centuries. In the 7th century, nearby residents fled to the walled palace in an effort to escape invading Croats. Since then the palace has been occupied, with residents making their homes and businesses within the palace basement and directly in its walls.[1] Today many restaurants and shops, and some homes, can still be found within the walls.

After the Middle Ages the palace was virtually unknown in the rest of Europe until the Scottish neo-classical architect Robert Adam had the ruins surveyed and, with the aid of French artist and antiquary Charles-Louis Clérisseau and several draughtsmen, published Ruins of the Palace of the Emperor Diocletian at Spalatro in Dalmatia (London, 1764).[2]

Diocletian's palace was an inspiration for Adam's new style of Neoclassical architecture[3] and the publication of measured drawings brought it into the design vocabulary of European architecture for the first time. A few decades later, in 1782, the French painter Louis-François Cassas created drawings of the palace, published by fr (Joseph Lavallée) in 1802 in the chronicles of his voyages.[4]

This palace is today, with all the most important historical buildings, in the centre of the city of Split. Diocletian's Palace far transcends local importance because of its degree of preservation. The Palace is one of the most famous and complete architectural and cultural features on the Croatian Adriatic coast. As the world's most complete remains of a Roman palace, it holds an outstanding place in Mediterranean, European and world heritage.

In November 1979 UNESCO, in line with the international convention on cultural and natural heritage, adopted a proposal that the historic city of Split built around the Palace should be included in the register of World Cultural Heritage.[5]

In November 2006 the City Council decided to permit over twenty new buildings within the palace (including a shopping and garage complex), although the palace had been declared a UNESCO World Heritage Monument. It is said that this decision was politically motivated and largely due to lobbying by local property developers. Once the public in 2007 came aware of the project, they petitioned against the decision and won. No new buildings, shopping center or the underground garage was built.

The World Monuments Fund has been working on a conservation project at the palace, including surveying structural integrity and cleaning and restoring the stone and plasterwork. 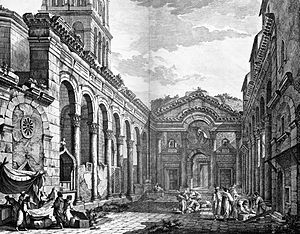 The ground plan of the palace is an irregular rectangle (approximately 160 meters x 190 meters) with towers projecting from the western, northern, and eastern facades. It combines qualities of a luxurious villa with those of a military camp, with its huge gates and watchtowers. The palace is enclosed by walls, and at times, it housed over 9000 people. Subterranean portions of the palace feature barrel vaulted stonework.

Only the southern facade, which rose directly from, or very near to, the sea, was unfortified. The elaborate architectural composition of the arcaded gallery on its upper floor differs from the more severe treatment of the three shore facades. A monumental gate in the middle of each of these walls led to an enclosed courtyard. The southern sea gate (the Porta Aenea) was simpler in shape and dimensions than the other three, and it is thought that it was originally intended either as the emperor's private access to the sea, or as a service entrance for supplies.

The design is derived from both villa and castrum types, and this duality is also evident in the arrangement of the interior. The transverse road (decumanus) linking the eastern gate (the Silver Gate or Porta argentea) and western gate (the Iron Gate or Porta ferrea) divided the complex into two-halves. In the southern half were the more luxurious structures; that is, the emperor's apartments, both public and private, and religious buildings. The emperor's apartments formed a block along the sea front and were situated above a substructure because the sloping terrain demanded significant differences in level. Although for many centuries almost completely filled with refuse, most of the substructure is well preserved, and indicates the original shape and disposition of the rooms above.

A monumental court, called the Peristyle, formed the northern access to the imperial apartments. It also gave access to Diocletian's mausoleum on the east (now Cathedral of St. Domnius), and to three temples on the west (two of which are now lost, the third having become a baptistery, originally being the temple of Jupiter). There is a temple just to the west of the Peristylum called The Temple of the Aesculapius, which has a semi cylindrical roof made out of hand carved stone blocks which did not leak until the 1940s, and was then covered with a lead roof. The temple was restored recently.

The northern half of the palace, divided in two parts by the main north-south street (cardo) leading from the Golden Gate (Porta aurea) to the Peristyle, is less well preserved. It is usually supposed that each part was a residential complex, housing soldiers, servants, and possibly some other facilities. Both parts were apparently surrounded by streets. Leading to perimeter walls there were rectangular buildings, possibly storage magazines.

The Palace is built of white local limestone and marble of high quality, most of which was from Brač marble quarries on the island of Brač, of tuff taken from the nearby river beds, and of brick made in Salonitan and other factories. Some material for decoration was imported: Egyptian granite columns, fine marble for revetments and some capitals produced in workshops in the Proconnesos. The Palace was decorated with numerous 3500-year-old granite sphinxes, originating from the site of Egyptian Pharaoh Thutmose III. Only three have survived the centuries. One is still on the Peristyle, the second sits headless in front of Jupiter's temple, and a third is in the city museum.

Diocletian's palace on the reverse of the Croatian 500 kuna banknote, issued in 1993.

Water for the palace and the whole Split area comes from the Jadro River near Salona. Along the road from Split to Salona impressive remains of the original Roman aqueduct can still be seen. They were extensively restored in the 19th century.

Today the palace, along with adjoining areas to the west, forms the very heart of Split. Many shops, restaurants, bars and apartments for tourists can be found within the palace.