From Infogalactic: the planetary knowledge core
Jump to: navigation, search
Not to be confused with the Westminster convention (Westminster system), the democratic parliamentary system of government of the UK.. 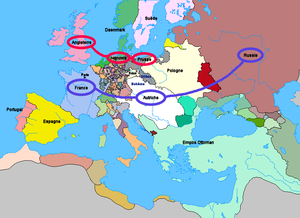 The alliances formed as a result of the Diplomatic Revolution.

The Diplomatic Revolution of 1756 was the reversal of longstanding alliances in Europe between the War of the Austrian Succession and the Seven Years' War; the shift has also been known as "the great change of partners". The essence of the revolution was that Britain and Austria versus France and Prussia became France and Austria versus Britain and Prussia. It was part of the stately quadrille which saw a constantly shifting pattern of alliances throughout the 18th century, part of efforts to preserve or upset the balance of power in Europe.

The diplomatic change was triggered by a separation of interests between Austria, Britain, and France. The Peace of Aix-la-Chapelle after the War of the Austrian Succession in 1748 left Austria aware of the high price it paid in having Britain as an ally. Maria Theresa of Austria had defended her claim to the Habsburg throne and had her husband, Francis Stephen, crowned Emperor in 1741, but she had been forced to relinquish valuable territory in the process. Under British diplomatic pressure, Maria Theresa had given up most of Lombardy and occupied Bavaria. The British further forced her to cede Parma to Spain, and more importantly, abandon the valuable state of Silesia to Prussian occupation. During the war, Frederick II ("the Great") of Prussia had seized Silesia, one of the Bohemian crown lands. This acquisition had further advanced Prussia as a great European power, which now posed an increasing threat to Austria’s German lands, and to Central Europe as a whole. The growth of Prussian power, though dangerous to Austria, was welcomed by the British who saw it as a means of balancing French power.

The results of the War of Austrian Succession were clear: Britain no longer viewed Austria as powerful enough to check French power and was thus content to build up smaller states like Prussia. Therefore, Britain and Prussia in the Westminster Convention (16 January 1756) agreed that Britain would not aid Austria in a renewed conflict for Silesia as long as Prussia agreed to protect Hanover from France. Protection of Hanover was important to Britain because it was a possession of their king. Britain felt that, given Prussia’s growing strength, it would be more apt to defend Hanover than Austria. Meanwhile, Austria was determined to reclaim Silesia, so the two allies found themselves with conflicting interests. Maria Theresa, recognizing the futility of renewed alliance with Britain, thus set out to align Austria with France, who could replace Britain as a valuable ally. Maria Theresa knew that, without a powerful ally such as France, she could never hope to reclaim Silesia from Frederick.

The agreement was followed by a more direct Anglo-Prussian Convention in 1758.

Maria Theresa sent her foreign policy minister, Count Wenzel Anton von Kaunitz, to France to secure an alliance that would enable Austria to reclaim Silesia. Kaunitz approached the Marquise de Pompadour, Louis XV's mistress, to intervene in the negotiations.[1] However, Louis XV proved reluctant to agree to any treaty presented by Kaunitz. Only with renewed aggression between France and Britain was Louis coerced to align with Austria. Furthermore, Austria no longer surrounded France; instead, Frederick II had managed to end the prospect of Habsburg-German dominion bordering French lands. Therefore, France no longer saw Austria as an immediate threat and entered into a defensive alliance with Austria. In response to the Westminster Convention, Louis XV’s ministers and Kaunitz concluded the First Treaty of Versailles (1 May 1756), both sides agreeing to remain neutral and provide 24,000 troops should either one get into conflict with a third party.

Maria Theresa’s diplomats, after securing French neutrality, actively began to establish an anti-Prussian coalition. Austria’s actions alerted Frederick II, who decided to strike first by invading Saxony, commencing the Seven Years' War (1756–1763). Frederick’s actions were meant to scare Russia out of supporting Austria (the two countries had previously entered into a defensive alliance in 1746). However, by invading Saxony, Frederick had only inflamed his enemies and Russia, under the direction of Empress Elizabeth, sent an additional 80,000 troops to Austria. One year after the signing of the First Treaty of Versailles, France and Austria signed a new offensive alliance on 1 May 1757. In the Second Treaty of Versailles Austria promised France the Austrian Netherlands, but in return Maria Theresa would receive Parma as well as 129,000 French troops and the promise of 12 million livres every year until Silesia was returned to Austria.

As a result of this diplomatic revolution, Britain and Prussia faced Austria, France, and Russia. Despite this reversal of alliances, however, the basic antagonisms remained: Prussia versus Austria and Britain versus France. All these tensions erupted during the Seven Years' War, to which the Diplomatic Revolution is considered[by whom?] a prelude.

The war ended in a decisive victory for Britain and Prussia; Britain's control of the seas and Prussia's formidable army proved to be a winning combination despite the attempts of France, Austria, and their European allies to preserve the balance of power. However, the Anglo-Prussian alliance proved to be short-lived largely due to the fact that Britain withdrew financial and military support for Prussia in 1762. The dissolution of this alliance, as well as the preeminent rise of Britain, resulted in Britain having no allies by the time the American Revolutionary War broke out.